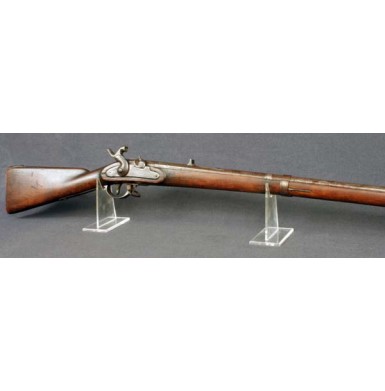 There is nothing that I find more interesting than a Civil War era weapon that can be directly connected to an actual Civil War soldier, who carried it at some point during his career. It is even better when the soldier served in a famous regiment that fought in a substantial number of battles during the war. The Austrian M-1854 Lorenz offered here is just that sort of gun “ one that clearly saw the elephant and is directly connected to one of those men who served in a very famous regiment. This Lorenz is stamped with the name G YAPLE on the cheek rest of the musket, and again twice on the barrel flat in front of the rear site. The marks on the barrel are faint, but the mark on the stock is quite legible. After searching the various Civil War soldier data bases I found a total of 21 men who served in the Union Army with the last name Yaple, and none in the Confederate Army. However, there is only one man with the first initial G who served during the war. His name was George Yaple and he was from Erie County, PA. According to the 1860 census, George Yaple was a farmer in Green Township, Erie County Pennsylvania. He was listed as being 28 years old, and had real estate holdings valued at $1,500 and personal possessions valued at $500. Yaple was clearly a strong Union man and he enlisted in the 90 day Erie Pennsylvania Infantry regiment on April 21, 1861 and was mustered out on July 21, 1861. A month later, 300 men from the Erie Infantry, along with many of their officers formed the core of the new 83rd Pennsylvania Volunteer Infantry regiment, which mustered into service on August 26, 1861. Yaple was enlisted as a private and assigned to Company D. The 83rd was initially assigned to Porter’s Division of the Army of the Potomac. In March of 1862, the Army of Potomac was reorganized into Corps, and the 83rd was assigned to the 3rd Corps, where they served until May of 1862, when they were reassigned to the 5th Corps, where they served until the end of the war. The 83rd PVI quickly earned a reputation for being one of the best-trained and well drilled regiments in the Army of the Potomac, and after winning a drill competition in late 1861, they were issued complete Zouave style uniforms and accouterments as an award. The unit did not have the opportunity to keep their reward very long, and at the end of the year were ordered to pack up their flashy uniforms, were issued standard uniforms and began a campaign that would see them involved in every major Eastern theater battle over the next 3 “ years. The 83rd was heavily engaged during the Peninsular Campaign of 1862, the Antietam Campaign and finally the awful assault on Marye’s Heights at Fredericksburg. By this time the 83rd was brigaded with the 44th New York, 16th Michigan and the 20th Maine, and was commanded by Colonel Strong Vincent, who would go on to command the brigade which would be known as Vincent’s Brigade. The 83rd saw action at the battle of Chancellorsville in mid-1863 and would win in greatest fame on July 2nd of that same year. On the second day of the battle of Gettysburg, it would Strong Vincent’s Brigade that was rushed to the summit of Little Round Top to hold secure the Union left from the brutal assault from Longstreet’s Confederate Corps. While the 20th Maine received the most credit for saving the Union left that day, the 83rd PA was the regiment immediately to the right of the Maine men and they fought every bit as hard to keep the Union line from being turned and flanked. During this battle, Colonel Vincent was killed. Following the battle of Gettysburg, the 83rd was involved in the pursuit of Lee’s army and ended 1863 participating in the Mine Run Campaign. 1864 saw the 83rd in combat at The Wilderness, Spotsylvania, Cold Harbor and Petersburg “ just to list the most well known battles. In 1865 they saw continued service and fought through the entire Appomattox Campaign, including Five Forks on April 1 and Appomattox Court House on April 9. They participated in the Grand Review in Washington on May 23 and were mustered out on June 28, 1865. No other Pennsylvania Regiment saw the service that the 83rd PA did. George Yaple served with the regiment from its organization through November 10, 1863 when he was mustered out for disability on a surgeon’s discharge. On January 12, 1864 George Yaple filed application #38,825 for an invalid pension. After his death, his wife filed application #447,122 for a widow’s pension. At this point I have not been able to find a period account of the issuance of Austrian Lorenz rifles to the 83rd PA. I found that they were issued “Harper’s Ferry Muskets’ (likely converted M-1816 muskets) when they were organized in 1861 and they were armed with Springfield’s at the end of the war. Many of the regiments in Army of the Potomac were issued a variety of arms during their service, with better guns being issued to the men as they became available. At the battle of the Little Round Top, diaries record that the 20th Maine was armed with Enfield’s that they felt were “inferior” and the 20th collected Springfield’s from the battlefield to rearm themselves with “better” guns. It is quite believable that the 83rd was armed with Lorenz’s at some point and may have upgraded on their own, or that they obtained the Lorenz’s themselves as battlefield upgrades. Clearly the gun and the unit are worthy of further research.

The Austrian M-1854 Lorenz rifle musket that bears Private Yaple’s name is a classic “Type I” and is in about .54 caliber. The gun has a cheek rest and a fixed, “block” rear site. The gun conforms to the Boker Sample #2, which were Lorenz rifle muskets with fixed sites in .54 caliber, of which Boker delivered 24,359 to the US Ordnance Department. The lock is marked with the usual Austrian Eagle to the rear of the hammer and is dated 859 for 1859 forward of the hammer. The lock still functions crisply and correctly on all positions. The gun retains the original block rear site, the front site / bayonet lug and both sling swivels. The original full-length ramrod is retained in the channel under the barrel, and retains the threads on the end. The rammer channel appears to have some trash in at the bottom, which keeps the rod from seating completely into the channel. The very end of the barrel was apparently dinged or damage in service, and about 1/8” of the end of the barrel was crudely filed away to remove the ding and put the weapon back into service. The metal of the gun has a medium brown patina over most of the surfaces, mixed with an underlying gray gunmetal color. The metal shows light to moderate pitting in the lock and breech area of the musket up to the rear site. Forward of the rear site the metal is mostly smooth, showing only light to moderate scattered peppering and pinpricking. The condition of the metal is consistent with a gun that was fired a lot during its service life and saw service in one of the hardest fighting regiments in the Army of the Potomac. The bore of the gun is in similar condition to the exterior of the rifle -showing considerable service. The bore is dark and dirty, but retains strong 4-groove rifling and shows scattered pitting over its entire length. The stock is in very nice condition, and has a deep, un-cleaned orange-brown color to the beech wood. The stock was lightly altered during the period of use, with the forend slightly slimmed and the step taken out of the stock where the rear barrel band is located. This makes the barrel band appear to be slightly loose on the gun, but it is simply the result of the slimmed stock. The stock is solid and does not have any breaks or repairs. It does show a few minor surface drying cracks along the grain of the wood. These as are quite common in beech wood stocks. The stock does show a number of bumps, dings and bruises, that one would expect of a gun that saw substantial use and service during the Civil War. There is a period W carved into the right side of the stock, and also an S stamped into both sides of the buttstock.

While it is certainly possible to find Civil War era muskets that have seen substantial combat service, it is much more difficult to located a gun that has a direct connection to a Civil War soldier or regiment. This gun belonged to a specific soldier who served through some of the most major conflicts of the American Civil War, including the Seven Days Campaign, Antietam, Fredericksburg, Chancellorsville and Gettysburg. He was discharged for disability at the end of 1863, after giving up his health to save the union. A nice binder of material regarding Private Yaple and the 83rd PA is included with the rifle, and I am quite sure that additional research will turn up even more interesting information about the soldier, the regiment and possibly the gun. This is a great opportunity to obtain an real, identified Civil War combat weapon, that may well have been at the Battle of Gettysburg, on Little Round Top, right next to the 20th Maine. How cool would that be to have in your relic collection”