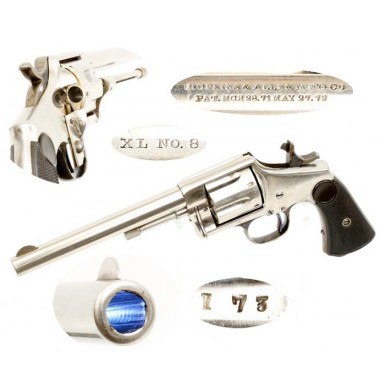 In 1867 Charles W. and Samuel S. Hopkins, along with Charles H. Allen purchased the faltering Bacon Manufacturing Company of Norwich, CT, there by establishing the Hopkins & Allen Manufacturing Company. Charles Hopkins had previously worked as a gunsmith at other area firearms manufacturing companies including Allen & Thurber, the Bacon Manufacturing Company and at the Manhattan Firearms Manufacturing Company. Henry Hopkins had also been an Allen & Thurber employee. As the company tried to expand during the late 1870s a number of other “Hopkins’ and “Allen” named individuals appear on the company rolls as employees, attorney and on the board of directors. Charles Converse, a major player in the now defunct Bacon company was also a principle in the new firm. The company was responsible for a number of American firearms patents, including at least three that pre-dated its inception, including a May 27, 1862 patent by Charles W. Hopkins for a swing-out cylinder, another swing-out cylinder patent issued on January 5, 1864 to Briggs & Hopkins and a pepperbox patent issued August 28, 1866 to Converse & Hopkins. In all, some 17 patents would be held by the company during its lifetime, some of which were contributed by men who are better known for firearms that bear their own names, like W.A. Hulbert (Merwin, Hulbert & Company) and J.M. Marlin (Marlin Firearms). The men at Hopkins & Allen were particularly savvy about the firearms business, and in addition to being mechanically minded and capable of turning out high quality arms, also realized that their manufacturing capabilities allowed them to produce guns for other companies that had a design they wanted to offer for sale, but did not have the manufacturing facilities to produce them. Today, this type of operation, where a company makes parts or products for a number of different brands is known as “OEM” (Original Equipment Manufacturer). During the latter part of the 19th century, Hopkins & Allen acted as the OEM contractor for a number of well-known gun companies, most notably Merwin, Hulbert & Company, and the Evans Repeating Rifle Company. Hopkins & Allen also produced a wide array of pocket “suicide special” firearms under various tradenames for retailers. More than three-dozen trade names can be associated with Hopkins & Allen, including such classics as Blue Jacket, Czar, Capt. Jack, Dictator, Ranger No 2, Safety Police, Wolverine and probably most well-known Tramp’s Terror, just to name a few. These guns were primarily small, spur trigger single action revolvers chambered for low power rimfire cartridges in .22 and .32 caliber. In 1874 Charles Converse sold his ownership in the company to Joseph Merwin (of Merwin, Hulbert & Company) and the association between those two firms was established until Merwin, Hulbert & Company went out of business in 1892. Hopkins & Allen produced all of the various firearms models marked by Merwin, Hulbert & Company, and based upon period reports and extant examples, the guns were very well made and of very high quality. Around 1877, after they had gained experience in manufacturing large frame revolvers for Merwin, Hulbert & Company, Hopkins & Allen introduced their own line of large frame, single action revolvers to compete with Colt and Smith & Wesson, the two major American handgun manufacturers of the period. These guns constituted the “XL No 8” line of handguns, which included the XL Army (.44 caliber, both rimfire & WCF), XL Navy (.38 RF caliber) and XL Police (also .38 RF caliber). It is believed that a total of 2,700 of the large framed XL No 8 revolvers of all models were produced by Hopkins & Allen between 1877 and 1885. The .44 caliber Army model was available with a 4 “, 6” or 7 ““ barrels as standard, and was primarily chambered for .44-40 (.44 Winchester Center Fire), with a small number also produced in .44 Rimfire Henry. The .38 caliber Navy model was only produced in rimfire and came with a 6 ““ barrel, while the XL Police was essentially the same as the Navy revolver with a 4 ““ barrel standard, but other lengths available on special order. The revolvers were available with either nickel or blued finished, with color case hardened hammers and triggerguards and fire blued triggers. Hard rubber or wood grips were standard. The revolvers were all six shot affairs with robust solid frames that had a spring loaded ejector rod that was located under the barrel. When the catch on the left side of the frame was depressed, the rod could be withdrawn from the center of the cylinder arbor and then automatically moved into position to eject cartridges from the cylinder, through the loading gated on the right side of the frame. The square butt, slightly hump backed silhouette of the XL No 8 revolvers was very similar to those sold under the Merwin, Hulbert & Company name, and it is likely that the 3rd Model Merwins with a topstrap could easily be mistaken for an XL No 8 and vice versa. The XL No 8 also utilized the same style of sliding loading gate as found on the Merwin, Hulbert & Company products, which no doubt added to the confusion. It appears likely that only a few hundred of each model were produced during a period of just under 10 years, with the XL Police being the least commonly encountered variant today. The XL No 8 was certainly Hopkins & Allen’s top of the line revolver and the closest they ever came to producing a martial handgun, but it is likely that their reputation for producing inexpensive “suicide special” handguns undermined their ability to successfully market the XL No 8 series. It is generally believed that this same issue was responsible for the inability of the Merwin, Hulbert & Company revolvers to attain the success of their Colt and Smith & Wesson competitors. As a result, production of the XL No 8 line was discontinued in 1885, although it is likely that unsold revolvers remained in inventory for some time. Merwin, Hulbert & Company failed in 1892 and six years later Hopkins & Allen was forced into bankruptcy. The company was reorganized as the Hopkins & Allen Firearms Company, but failed to achieve the financial success they had known during the 1870s and 1880s. In 1914 the company was sold to the Marlin-Rockwell Arms Company, and ceased to exist.

Offered here is a NEAR MINT example of a rare Hopkins & Allen XL No 8 Army Revolver in the very scarce .44 Henry Rimfire chambering. The revolver is serial number 173, placing its production in the first year of manufacture for the model, 1877. The revolver was offered in this caliber in order to be paired with the Henry Rifle or Winchester Model 1866, while the majority of the XL No 8 Army models were produced in .44-40 to pair them with the Winchester Model 1873. The revolver is clearly marked on the top strap on both sides of the sighting groove. The right hand side is marked in two lines:

And on the other side of the sighting groove in much larger letters:

The only other external marks are the serial number 173 which is found on the bottom of the barrel, concealed by the ejector rod. The serial number is also found on the face of the ejector rod crane, on the rear face of the cylinder, on the left side of the grip frame (under the left grip), and scratched into the interior of the right grip panel. Another number, “607” is also scratched into the interior if the panel and is then scratched out, as if it were a manufacturing mistake. The revolver has a 6 5/8” long round barrel, certainly not what was listed as “catalog” standard, but typical of the work they performed for Merwin, Hulbert & Company as well. Extant Merwin large frame revolvers often appear with barrels roughly 1/8” longer or shorter than “standard” likely the result of the manufacturing process. As a 6 ““ barrel was standard for the XL No 8 “Navy”, it is safe to assume that this was simply a customer request for mid-length barrel that was longer than the cataloged 6” but shorter than the full length 7 “. As noted the revolver is in EXCELLENT to NEAR MINT condition and retains about 93%+ of its original factory nickel finish. The finish shows some very tiny areas of flecked flaking, mostly around the sharp edges of the frame above, below and in front of the cylinder and at the muzzle crown. There is also some minor surface oxidation present, with the largest areas being evenly scattered brown flecks on the bottom of the butt, backstop and grip strap, as well as a thin, brownish haze that fills most of one of the cylinder flutes and part of another. There is also a slightly bright “turn ring” visible on the periphery of the cylinder, passing through the stop notches. Some minor surface scratches can also be seen on the nickel under good light, but these do not represent any finish loss, just some light scuffing. The recesses of the revolver, nooks and crannies also show the remnants of old, dried oil or grease, and this suggests that an old application of thick oil has allowed this revolver to survive in nearly pristine condition. This old grease is visible in the photos below as the brownish residue in the tight areas and corners of the gun. The hammer retains about 90%+ vivid case coloring with only some minor high edge wear and loss, and the case hardened triggerguard retains about 80%+ vivid coloring, with most of the loss along the bottom of the triggerguard and the sharp edges. The trigger retains about 85%+ bright fire blued finish, showing some minor loss and fading and wear along the sides with some lightly freckled oxidation present as well. The revolver is mechanically EXCELLENT and functions crisply and correctly on all positions. The revolver times, indexes and locks up perfectly. The sliding loading gate functions perfectly as does the ejector rod system. The bore of the revolver is in just about pristine and remains very bright with exceptionally crisp narrow 5-groove rifling. The original “D” shaped lanyard ring is present on the butt of the revolver, and the original front sight is present on the top of the barrel near the muzzle. All of the screws remain in very good condition with the exception of a small frame screw on the left side, forward of the cylinder. This tiny screw has part of its head broken off. This is not even really apparent to look at the revolver, but is certainly obvious if you try to use a screwdriver to remove the screw. This is really the only condition issue even worth mentioning on this otherwise fantastic revolver. The hard rubber grips are in NEAR EXCELLENT condition as well. They are solid and complete and free of any breaks, cracks, chips or repairs. The impressed checkering remains very crisp and the grips fit the frame perfectly. The grips have a dark chocolate brown color, typical of 19th century hard rubber that tends to turn brownish over time from its original black color. Other than this minor fading towards brown the grips are in about the same condition as when the revolver was manufactured in 1877.

Overall this is a really stunning example of a very scarce, large frame, revolver from the height of American westward expansion. It is generally believed that less than a thousand of the Hopkins & Allen XL No 8 Army revolvers were produced, with the majority in .44 WCF and only a handful produced in .44 Henry Rimfire. This is one of those extremely rare rimfire revolvers and it is in simply fantastic condition. This is one of those very scarce revolvers that is missing from the majority of advanced old west handgun collections, and would be equally at home in a general western collection or a collection that specialized in Merwin, Hulbert & Company revolvers. It is highly unlikely that another example of a 1st year of production Hopkins & Allen XL No 8 Army Revolver in .44 rimfire could be found in better condition, so if you like to have the best of the best, and the finest in rare American revolvers, this is one that you certainly need to add to your collection.