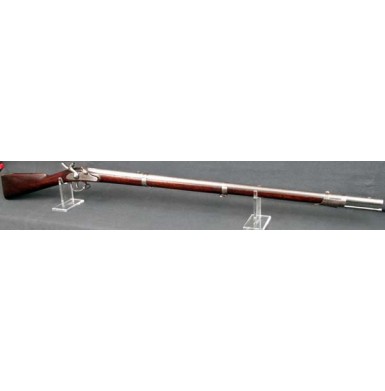 This may be the single rarest Civil War era long arm I have ever had the opportunity to offer for sale. While I have had the chance to sell some weapons that were so rare that only a handful of them were known to still exist, to my knowledge only two of these rifle muskets are known to exist today. The rifle musket was manufactured by the famous Pennsylvania gunmaker Henry Leman, and while his percussion conversion muskets, military rifles and sporting rifles are well known, most collectors are unaware that he ever produced a military style rifle musket. Henry Eicholtz Leman (1812-1887) learned his craft working for the Tryon gun manufacturing company in Philadelphia from 1831-1834 and established his own Conestoga Rifle Works in Lancaster, PA in 1834 and remained in business until his death in 1887 (see Sellers - American Gunsmiths p183). During that time Leman produced a variety of sporting rifles and a large number of rifle locks for use by other gunsmiths. It is believed that many of the civilian arms attributed to Leman are in fact the work of other Pennsylvania gunsmiths who were utilizing his locks. Leman never modernized or upgrade his manufactory and as such relied on hand made and fit parts, which did not allow for the interchangeability of parts. The process of making arms by hand was also much slower than the process that used at least some machinery to produce the arms. The failure to modernize prevented Leman from securing any US Ordnance Department contracts to produce rifle muskets during the American Civil War. (see Whisker, Hartzler & Yantz - The US M-1861 Springfield Rifle Musket “ 2nd Edition p196-197). Leman did, however, manage to secure a number of contracts with the state of Pennsylvania, primarily for the conversion of US M-1816/22 and M-1835/40 muskets to percussion by means of patent breech system. He also produced a number of 33” barreled rifles that closely resembled the US M-1841 “Mississippi Rifle”, both with brass and iron mountings. It is believed that less than 500 of these military rifles were produced by Leman (Reilly United States Military Small Arms, 1816-1865 p53), and although there are no known state contracts for these rifles it is generally believed that these rifles went to arm Pennsylvania militia units. Until recently there was no documentation that Leman ever produced a full length, military style rifle musket. However, in the 2006 book The US M-1861 Springfield Rifle Musket “ 2nd Edition by Whisker, Hartzler & Yantz, a .58 caliber 3-band rifle musket by Henry Leman is illustrated on pages 220 & 221. The gun is in the Peter Albee collection, and according to the text, <.i>“a three-band rifle musket is also known”, indicating that it was the only one known to the authors at that time. Subsequently Mr. Albee discovered a second example of these incredibly scarce gun, and sold it to another collector, and it is this second known example that is offered for sale here.

The H.E. LEMAN rifle musket offered for sale here is a classic example of one of Leman’s handmade military long arms. The gun is a typical military style rifle musket that is 55 ““ in overall length. It has a 40 “, .58 caliber barrel, which is rifled with three wide and shallow grooves with a moderate rate of twist, making a complete rotation in just under the length of the barrel “ about twice the rate of a US M-1861 rifle musket. The breech has a small octagon section and the bolster features a clean out screw and the overall barrel profile is very similar to the US M-1855 and M-1861 rifle muskets. The barrel is secured to the stock by three iron barrel bands, which are secured by pins through the stock and bands, instead of by band springs. This system was much easier to use than the more complex inletting necessary to install band springs in the stock. The bands are the same style used on the US M-1816/22 series of muskets and may be recycled bands from some of the M-1816/22 muskets that were sent to Leman for repair and conversion to percussion. The double strapped upper band retains the original brass blade front site as used on the musket, and a socket bayonet lug is attached to the top of the barrel. The barrel diameter and lug placement allow the rifle musket to accept a standard US M-1855/70 .58 caliber socket bayonet. The balance of the musket furniture is also of iron, with a single screw securing the lock, which passes through a unique, semi-tear drop shaped escutcheon. The iron butt plate is similar in profile to the US M-1817 "Common Rifle" butt plate and is unmarked. The lock plate is of the flat style, without a beveled edge and is clearly marked in two lines, forward of the hammer: H. E. LEMAN / LANCASTER PA. This same marking is also found on the top flat of the breech. The lock is fully functional and works crisply on all positions. The gun is mechanically excellent. The hammer has a relatively thin profile and has a taller than normal hammer spur, which is often encountered on other military arms produced by Leman. The gun has two iron loop sling swivels, one secured to the front bow of the triggerguard and one on the middle band. Rivets secure both swivels, as on a typical US rifle musket of the era. The rear site is fixed block site, dovetailed to barrel just under 1” behind the rear barrel band, and is of the style encountered on US M-1817 “Common Rifles”. The tulip head, iron rammer is somewhat crudely made and is of the US M-1861 Special Model style, with a straight shank and appears to be retained by friction alone, without the assistance of a rammer spoon. The ramrod is full length and retains threads at the end that accept standard US M-1855 pattern cleaning implements. The rifle musket is stocked to within 4” of the muzzle, which is one inch shorter that typical US M-1855 and M-1861 rifle muskets, which are stocked to within 3” of the muzzle.

This incredibly scarce Leman Rifle Musket is in about NEAR FINE overall condition. The gun appears to be 100% complete and correct in every fashion, but other than the one example pictured in the previously mentioned book, there are no other known examples to compare it to. This gun conforms to the published example exactly. The metal of the rifle musket is in about VERY GOOD+ to NEAR FINE condition. As previously mentioned the gun is crisply and clearly marked and is in excellent mechanical condition. The metal is mostly smooth throughout, showing only some scattered patches of light to moderate peppering and pinpricking, mostly in the breech area of the barrel. The breech flats remain crisp with good edges. The metal is mostly a dove gray patina, with scattered patches of splotchy age staining and discoloration. The bore of the rifle musket is about FINE. The bore is bright and shows crisp rifling, although it is shallow, and has some very minor scattered patches of light peppering in the grooves, mostly in the last 2” near the muzzle. The stock is in about FINE condition. The stock is full length, with no breaks or cracks. The stock does show a number of bumps, dings and minor dings, although nothing that would not be expected one a150 year old military musket. There is a tiny chip of wood at the front edge of the lock plate that has been repaired (with the original piece of wood), and it is barely visible, but mentioned for exactness. There are also a couple of small chips of wood missing from the upper rear edge of the lock mortise, from improper lock removal. The stock retains strong edges and shows no signs of being sanded or refinished. The stock is somewhat roughly hewn and clearly appears to be handmade, and without a significant amount of concern to the final finish of the product. Although the stock finish is somewhat rough, the wood to metal fit is excellent throughout and executed in a workmanlike fashion.

This musket is a true enigma. I can only assume that it was manufactured as part of a small number of prototype military rifle muskets that were manufactured in an attempt for Leman to secure a contract to produce rifle muskets either for Pennsylvania or possibly the US Government. With only two examples of this scarce rifle musket known, the opportunity to obtain one of these guns may never present itself again. This pattern of rifle musket is well documented in the Whisker, Hartzler & Yantz book and would be a wonderful centerpiece in any Civil War long arms collection that emphasizes Pennsylvania made arms or secondary martial long arms. I am truly proud to offer this rifle musket to the collecting community and as an additional bonus, a brand new copy of the book The US M-1861 Springfield Rifle Musket “ 2nd Edition by Whisker, Hartzler & Yantz will be included with the gun when it is purchased. The book is provided compliments of author Larry Yantz, who was very excited to see this extremely rare rifle musket for sale at the recent Maryland Arms Collectors Association Show (the Baltimore Show) and felt whoever bought it should have a copy of the book to document this wonderfully scarce gun.