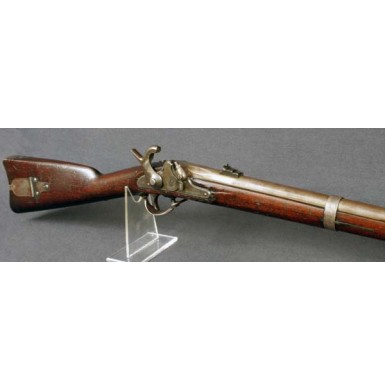 This is a wonderful example of the US M-1855 Rifle as produced from 1857 through 1861 at the Rifle Works at the Harper’s Ferry National Armory. The rifles were produced in two versions; the first style was “brass mounted” with a browned barrel and a long-base, long-range rear site. 3,544 of these brass-mounted rifles were produced and approximately 2,800 of those were destroyed in the fire when the Armory was captured by the Confederacy in April of 1861. The balance of the production (about 5,100 rifles) were of the later “iron mounted” style. Most of these rifles were finished National Armory Bright with bright barrels and hardware. A handful of these iron-mounted guns have been encountered with blued furniture. The FINE condition M-1855 rifle offered here is one of the very last of the “iron mounted” production. The gun is clearly and crisply marked 1861 on both the tail of the lock and on the breech of the barrel. Interestingly the gun also shows strong traces of original arsenal blued finish on the barrel band springs, trigger guard, butt plate and patch box. The lock shows some nice traces of color case hardening on the outside, as well as the inside, and the bottom of the barrel (protected by the stock), shows about 60%+ original thinning arsenal lacquer-brown finish. Since very few rifles were completed in fiscal year 1861, not many of these rifles survive. It is not clear if this rifle was completed and issued from the armory prior to the Confederacy capturing Harper’s Ferry or not. More than likely it was part of an 1861 shipment of M-1855 rifles to the Columbian Arsenal in Washington, DC. This was done to try to remove completed arms from Harper’s Ferry for fear of a possible Confederate attack and capture. At the outbreak of the war the Columbian Arsenal has 2,285 M-1855 rifles on hand. These were initially issued to District of Columbia militia units, but all were returned by July of 1861, when the units were disbanded. At this point, a number of the rifles were issued to the states, including Ohio, New Jersey and New York. Since Ohio and New Jersey were both very strict about marking state ownership upon any of the guns delivered to them, it is most likely that this rifle was issued to one of the New York regiments that received these arms. These regiments included the 7th, 8th, 11th and 12th New York State Militia regiments. The 11th was much better known as Ellsworth’s Zouaves.

The rifle offered here is in about FINE condition overall. The metal rates about VERY FINE. The lock is crisply and clearly marked: U.S. / HARPER’s FERRY in two horizontal lines forward of the hammer, and the date 1861 horizontally behind the hammer. The breech is clearly and crisply marked with the matching date, 1861, and the left barrel flat is marked with the typical V / P / Eagle Head. The lock functions perfectly and all of the original Maynard Tape Primer parts are present and fully functional. The hammer responds correctly to both half cock and full cock, and the action remains tight and crisp. The hammer is clearly sub-inspector marked on one side with a V and on the other side with an S. As noted earlier, the lock retains traces of case hardening on the exterior as well as the interior of the lock, indicating that the lock may not have been polished to National Armory Bright. The metal is crisp and smooth throughout, with only the most minor pinpricking present near the breech. The rifle has a truly fine, bright, crisp bore. The barrel has a smooth, thin brown patina over its entire surface, with the furniture showing strong traces of blue. The original rifle rear site is present and correctly marked R. It retains about 70% of its original blued finish as well. The original swelled tulip head ramrod is present, full-length and retains fine threads on the end. The original rear sling swivel is present on the triggerguard. The upper swivel is a correct, and likely original, replacement. The rear barrel band is marked with a rack number: K / 36 and the patch box is marked 31. The original spare cone (nipple) is present in the patchbox. The iron butt plate is marked with the standard U.S. on the top of the tang. The stock is in about VERY GOOD condition overall, and it not quite as crisp and fine as the metal. The stock shows a significant number of bumps, dings and nicks from handling and use. There are two faint cartouche outlines on the flat opposite the lock, but they are not legible. The stock is full length, solid and without any breaks or cracks. The stock still retains decent edges, worn only by use, not by sanding. There are a couple of minor gouges near the upper barrel band and a very small chip of wood is missing behind the left side of the tang “ from improper barrel removal, that has been filled with a small amount of synthetic wood filler. I would consider removing the filler if I owned the gun, as the chip is small an shallow and would not detract from the overall display.

Overall this is a really great example of a late production Harper’s Ferry M-1855 iron mounted rifle. The gun has excellent markings, mechanics and a fine bore. The gun is one of the odd iron mounted guns that was also blued and browned “ a rare find among M-1855 rifles. Whether you are adding this rifle to a fine long arms collection or are considering it as an N-SSA “tack driver”, it is a great example of a relatively rare US Martial long arm, in great condition. If the buyer is interested I have a fine condition matching saber bayonet & scabbard available for the gun, as well as an original M-1855 Rifleman's belt. Either or both would be great additions to this rifle.