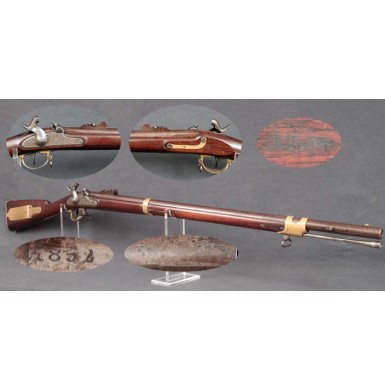 This is a really wonderful condition example of the US M-1841 Mississippi Rifle as produced at the National Armory at Harper’s Ferry. The US M-1841 Rifle. During the production run at Harper’s Ferry from 1844 to 1855, the armory produced 25,296 of the rifles, while an additional 66,500 were produced by a variety of contractors for the US government. The M-1841 was the first percussion ignition long arm adopted by the US military. It was also the first large-scale production long arm to be manufactured with interchangeable parts by a National Armory. While the M-1819 Hall breech loading flintlock rifle (as produced at the rifle works at Harper’s Ferry) was also an interchangeable parts weapon, it was produced in limited quantities and was not intended for the level of widespread issue that the M-1841 was destined for. As originally designed, the M-1841 was a .54 caliber rifle intended to fire a patched round ball and was equipped with a fixed rear sight and had no provision for a bayonet. Under Secretary of War Jefferson Davis (who served in that capacity under President Franklin Pierce from 1853-1857) the national armories were tasked with the job of modernizing US military small arms and munitions. Davis had direct personal experience with the effectiveness of the M-1841 rifle from his fighting experience during the Mexican American War, and felt that arming all of the US military with rifled arms would put the army at a distinct advantage compared to armies that still relied upon smoothbore muskets. During the mid-1850’s Harper’s Ferry started experimenting with a variety of modifications to the M-1841 rifle to make it a more modern and useful weapon. During these experimentations, a variety of adjustable rear sights and bayonet lug configurations were tried, in an attempt to find the best possible improvements for the rifle. These series of experiments, with the additional modification of adding the Maynard automatic tape priming system, eventually resulted in what would be the replacement for the M-1841 rifle; the M-1855 rifle. During the modification and testing process, small quantities of rifles (typically in lots of roughly 500-1000) were modified and sent into the field for use and trials. Many of these guns remained in their original .54 caliber, and were simply platforms to test different patterns of rear sights and saber bayonet systems. After the adoption of the M-1855 family of arms, and the adoption of .58 caliber as the standard military caliber, many of the guns were re-bored and re-rifled for the use .58 elongated ball ammunition and were provided with all iron ramrods designed for use with conical balls. It is believed that all of the M-1841’s produced during the final year of production at Harper’s Ferry were produced in .58 caliber. The rifles that were modified at Harper’s Ferry were pulled from existing stocks of Harper’s Ferry manufactured rifles in storage there or at the Washington Arsenal. The rifles were typically reassembled without any regard to the origin of the parts. Since the rifles were interchangeable, there was no need to mark barrels, locks and stocks to keep the original components together. As such, mismatched lock and barrel dates are the rule, rather than the exception on these armory altered arms. Arms researchers and collectors differ on what terminology to use in the description of these altered “Mississippi” rifles (Type I, Type II, etc), but at least five patterns of rear sight and three styles of saber bayonet attachment were experimented with, and extant examples of nearly every possible combination exist in both .54 and .58 caliber.

This particular example of a experimental, Harper’s Ferry altered US M-1841 Mississippi Rifle is in VERY FINE condition and is of the alteration style most often referred to as Type II. The gun is 100% complete and correct in every way. It is one of the guns that retains its original .54 bore, with 7-groove, rapid twist rifling for use with patched round balls. The rifle has an experimental long base, adjustable ladder rear sight, similar in design to that found on the P-1853 Enfield rifle musket. The gun has had saber bayonet lug with a short key dovetailed and brazed onto the right hand side of the barrel, near the muzzle. In order to fit the rifle with a lug mounted saber bayonet, the forend of the rifle had to be shortened slightly, and the brass nose cap had to be replaced with a new, shorter one. According to research conducted by the late Howard Michael “Howie” Madaus, this particular style of rifle alteration was done during 1854-1855. The rifle shows mixed dates, as is typical of Harper’s Ferry altered rifles. The lock is clearly marked in three vertical lines to the rear of the hammer” HARPERS / FERRY / 1851 and with a (Spread-Winged Eagle) / U S forward of the hammer. The barrel tang is clearly marked with the date 1852. The left breech of the rifle is marked with the typical Harper’s Ferry inspector marks: W W / P and with a V / P / (Eagle Head). The Harper’s Ferry stock bears the usual three router centering holes in the patch box (the middle one being larger than normal), as well the block inspectors initials J L R. The stock flat opposite the lock shows the block letter inspectors initials J L R. The JLR mark is that of Harper’s Ferry armory sub-inspector John L Reseler, who inspected M-1841 “Mississippi” Rifles at Harper’s Ferry from 1850 to 1855. As is correct on Harper’s Ferry produced Mississippi rifle, there is no US mark on the buttplate. All of the marks in the metal remain relatively crisp and legible. The lock retains some nice traces of its original case hardened finish, with the majority of the lock showing a lightly mottled medium dove gray color. The hammer shows some traces of case coloring as well and has a lovely matching gray color. The lock is mechanically excellent and functions perfectly on all positions. The barrel retains about 30%+ of its original arsenal brown finish, which has faded and worn, and has mixed with a lovely plum-brown patina. There is some light scattered pinpricking and peppering present on the barrel, as well as some small patches of light surface oxidation. The bore of the rifle rates about VERY GOOD+ to NEAR FINE. It retains its original deep, crisp 7-groove rifling and is mostly bright with only some light scattered pitting and old dirt along its length. The gun retains both of its original sling swivels, and the original spare cone (nipple) is in the patchbox. The original and correct alteration rear sight and bayonet lug are present as well. The original and correct period of alteration ramrod is in place in the channel under the stock. The rod is the post-1855 all steel rod which was designed for use with the Mini” projectile. This pattern of ramrod became standard for the M-1841 rifle in 1855 and was added to many of the arsenal-altered guns that were modified after 1855. It is full length and retains its original threads at the end. The brass furniture has a lovely honey colored, golden patina. The wood screws (mounting the buttplate, triggerguard and patchbox) all retain significant amounts of their original blued finish, with some fading and dulling from age. The stock of the rifle is really in about FINE condition. The block letter marks remain mostly legible in the patchbox and relatively legible on the flat opposite the lock. The edges and contours of the stock are in very nice condition, with good definition and no signs of having ever been sanded. The stock is full length and is free of any breaks or repairs. The only minor imperfections worth mentioning are a couple of deep dings in the stock and a couple of very tiny grain cracks. The dings include a rather deep one near the wrist, behind the hammer, which appears to be the result of another rifle hammer’s spur hitting this gun. There is also a deep ding in the reverse of the buttstock. This ding has a small amount of waxy filler in it. Both dings are very old and are from the period of use. There are also two tiny stress grain cracks in the stock. One crack runs from the rear lock mounting screw to the barrel channel (the result of the screw being over tightened), and the other one is present at the rear of the lock mortise. Both are tiny grain cracks, which appear to be along the surface only and are not structural. Otherwise, the stock shows a number of the usual bumps, dings and minor marks from handling, use and storage, as would be expected, but shows no abuse or damage at all. The minor imperfections are mentioned for exactness in the description.

Overall this is really a wonderful example of a scarce Harper’s Ferry US M-1841 Mississippi Rifle, with Harper’s Ferry rear sight and bayonet lug alterations. The gun is just in wonderful condition with crisp metal, fine markings and a very nice stock. The gun is a 100% correct Harper’s Ferry produced & altered rifle. This is an important distinction, as Harper’s Ferry locks are often found in M-1841 rifles made by other makers, in an attempt to increase the desirability and value of an otherwise less valuable contractor made gun. The gun is mechanically fine and has a very nice bore. I have always found the variants with the long base ladder rear sights and the sabers bayonet lugs to be the most attractive Mississippi rifle variants. This would be a perfect addition to any Civil War rifle display, as it was an experimental predecessor to the M-1855 brass mounted rifles. If you have been waiting for a no-excuses, completely correct Harper’s Ferry Mississippi to add to your collection, this would be a difficult one to upgrade from and one that you will be very proud to own.