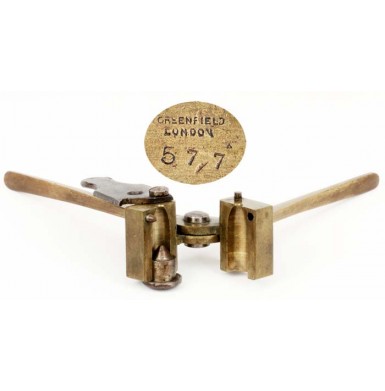 This is a really wonderful brass Pritchett Bullet Mold for the .577 English Enfield rifle and rifle musket. Thousands of English made, brass molds for Enfield pattern rifles and rifle muskets were imported by both the north and south during the American Civil War. One bullet mold was usually included with every 20 long arms delivered, or one mold per case. The large majority of these molds are unmarked, and marked examples are rather scarce. When the molds are marked, they are usually marked only with their caliber, expressed either in the English “bore” system, or less often with the actual caliber in tenths/hundredths/thousands of an inch. The most commonly encountered bore markings for long arm molds are 25 Bore (.577 caliber), 24 Bore (.58 caliber) and much less frequently 26 Bore (.57 caliber). Very rarely the molds bear a makers mark, and when they do they are usually just the initials of the maker.

This wonderful Pritchett Bullet Mold is not only in VERY FINE, but is marked both with the caliber of the mold and the actual maker of the mold. The mold is crisply stamped with a two line makers mark on the right side of the mold block, which reads GREENFIELD / LONDON. The maker’s mark is applied with a single, two line die stamp. Under that maker’s mark, the caliber 577 is stamped in individual die stamps, about twice the size of the maker’s mark. John Greenfield was listed in the period London directories as a “Lathe & Tool Maker”. He originally established his business on Molyneux Street, Marylebone in 1826, and in 1839 he moved to 10 Broad Street. At that time he added “Engineer & Percussion Cap Maker” to his directory listing. The firm became John Greenfield & Son in 1850. In 1872, the company changed their directory listing to “Gun Implement Maker”. In 1875 they moved the business to 5 Queen’s Buildings, Pancras Street and remained there until going out of business in 1883.

The mold is in wonderful condition and is 100% complete and fully functional. The large mold measures 8 7/8” in overall length, including the sprue cutter’s handle, and 7 ““ long from the tip of the arms to the end of the mold block, not counting the cutter. The long, curved handles are 6 1/8” long, and the exterior of the mold block is 1.628” tall, 1.275” long and 1.285” wide. The mold cavity is in pristine condition, and measures approximately .560” in diameter and casts a bullet about 1” in overall length and about .729” from the nose to the deepest recess in the base. The original iron base plug is in place in the bottom of the mold, and appears to be secured by its original screw. The base plug has a small piece of old lead stuck to the upper edge of its shoulder, where the plug taper begins. The mold would clearly cast lovely smooth sided Pritchett bullets today. The mold opens and closes smoothly, and the original guide pin is in place, making sure the mold block is perfectly aligned when it closes and that it closes securely. The original iron sprue cutter is in place on the top of the mold block and functions smoothly. The cutter shows some light surface oxidation and minor roughness, but retains about 30%-40% of its original blued finish, mixed with a nice plum-brown patina. The brass mold has a lovely, untouched golden-rod patina that is untouched and very attractive. The body and arms show a variety of small dents and dings, indicative of use, but not abuse.

Overall this is a really wonderful example of a British Enfield bullet mold that is not only caliber marked, but also bears a fabulous maker’s mark as well. Molds this well marked rarely find their way to market, as the majority of the molds that were imported appear to have born not marks at all. This would be a great addition to any Civil War bullet mold collection and would be a fabulous accessory to add to the display of your Enfield rifles and muskets.