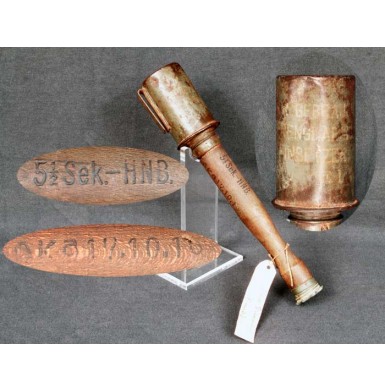 This is a VERY GOOD condition example of the German M-1917 Stielhandgranate Hand Grenade. The classic “Stick Grenade”, or “Potato Masher” is probably one of the most instantly recognizable field weapons from World War I and World War II. The German “stick grenade” first appeared in service around 1915, and over the next couple of years the design was refined into what would become the M-1917. The M-1917 was the basis for the standard German hand grenade of World War II, the M-1924. The earliest stick grenades incorporated a simple sheet metal cylinder filled with explosives, which was attached to a wooden handle that made the handling and throwing of the grenade easier. A string ran through the center of the wooden handle, which when pulled would ignite the timed detonating fuse, which in turn detonated the grenade. The fuses varied in time from about 5 seconds to 8 seconds. These grenades were simple concussion grenades and were designed for offensive use, while most Allied grenades were fragmentation grenades, which were intended for use as defensive weapons. As German munitions technology improved, and issues with use in the field were addressed, the design of the grenade was improved and modified. The M-1917 had a smaller explosive charge than earlier designs, as the power and quality of the explosives had improved. The grenade also incorporated a flanged screw off cap on the bottom of the handle, which secured the detonating pull cord, and reduced the chance for accidental arming of the grenade. A cylindrical ceramic weight was also added to the bottom of the cord. This weight made it easier to remove the cord from the cavity and to pull the cord. The wooden handles were stamped with the fuse time and the date of manufacture of the grenade. The explosive head of the grenade incorporated a belt hook, to allowed the grenade to be hung from a belt, or a fence as an improvised booby trap.

This German M-1917 Stielhandgranate Hand Grenade is in VERY GOOD condition. The grenade is inert and completely safe, with no explosive charge present. The original, used detonator remains in the handle, but it is spent and is no longer functional. The sheet metal explosive charge cover shows bumps, dings and dents from service and use. The “can” retains about 50% of its original filed gray-green paint. The balance of the explosives container has a lightly oxidized brown patina, with patches of light to moderate roughness and some surface rust. The cylinder has the typical instructions painted on it in white letters: Vor Gebrauch / Sprengkapsel / Einsetzen / E L’B. The first three lines roughly translate to say “Before Use, Insert Detonator”, which was definitely good advice if you wanted the grenade to function! The last line may be a maker code or other pertinent information. The explosive head still unscrews from the wooden handle and retains its original sheet metal belt hook. The original sheet metal screw collar is attached to the original wooden handle by two screws, with two additional screw holes left unused. The bottom of the handle has the original sheet metal collar, which is attached by three pins, with the fourth one missing. The original flanged sheet metal cap is present, and a couple of the eight flanges are slightly bent. Inside the recess is an original ceramic disc, with a piece of twine that may be original and may be an old replacement. In either cases, the cord and disc add substantially to the display of the grenade. The wooden handle is clearly marked in two lines, one reading 5 “ Sek. “ HNB, and the second reading: aka 17.10.16. The first marking indicates that the fuse has 5 “ second burn time, and the “HNB” refers to Hexanitrobenzene, which is a high density explosive with the chemical formula C6-N6-O12. The second line is the date of manufacture, which was October 16, 1917. This puts the production of the grenade well before the massive Allied offensives of 1918 helped bring the Great War to a close. The wood handle is in nice condition and shows no breaks, cracks or repairs. There is a very old collection tag attached to the handle with twine, which reads: “Hand Grenade (Bomb)”. The tag is hand written in ink, in an old style hand.

Overall this is a great example of the most readily recognizable hand grenade of the World War One era. Even those with little or no interest in militaria quickly recognize the classic German “Potato Masher”. No collection of Great War military relics and weapons is complete without a Stielhandgranate, and this one will be a great addition to your collection.