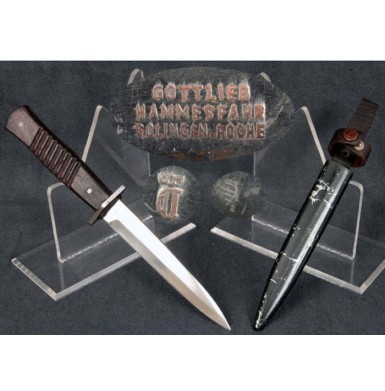 This is a classic example of the World War I era German military Nahkampfmesser or close combat knife. The knife is in about VERY FINE condition and retains its original scabbard. The knife is clearly marked in three horizontal lines, on the reverse ricasso, GOTTLIEB / HAMMESFAHR / SOLINGEN “ FOCHE. The obverse ricasso shows a (CROWN) D proof or inspection mark, as well as what appears to be a lightly stamped “stick eagle” WWII era Waffen Ampt inspectors mark. The Gottlieb Hammesfahr company was founded in Solingen-Foche in 1804 and produced a variety of cutlery items and edged weapons until the company was sold in 1971. The knife is of the typical World War I “trench knife” style, with a 6” dagger blade and an overall length of 11”. The knife has slab wooden scales (grips) with 9 diagonal grooves to improve the gripping surface. The scales are retained with a pair of pins. The same pattern of knife is depicted as figure 3-20 in Knives of War by Gordon Hughes, Barry Jenkins & Robert Buerlein. The blade of the knife remains mostly bright, with only some light sharpening marks present along the sharp edge. The blade shows a handful of minor surface scrapes from being inserted and removed from the scabbard. The original leather washer is present at the ricasso, in front of the cross guard. The original metal scabbard is present and retains the original leather belt loop and knife-retaining strap. The leather remains supple and in fully functional condition. The scabbard retains about 90% of its black painted finish, which may have been repainted at some point in the past. This pattern of knife was produced from the Great War era through World War II. This knife appears to be World War I production, which may have seen additional use (as indicated by the apparent Waffen Ampt) during World War II. Overall this is a high condition, very attractive and well marked WWI-WWII German military fighting knife, that will be a wonderful addition to your edged weapons collection.