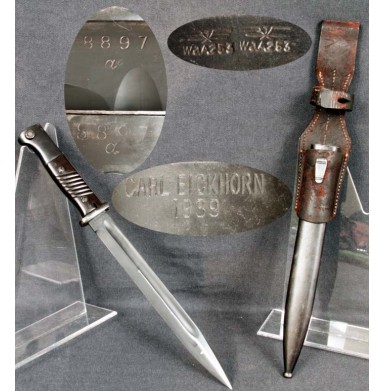 This is a wonderful condition example of the German Seitengewehr M-1884/98 3rd Model (Version) for use with the German Mauser k98 rifle. This was the standard issued bayonet for the German military during the World War II era, and the years leading up to that war. This bayonet was produced by the famous Carl Eickhorn Company of Solingen, Germany. Carl Eickhorn, who was a grinder, merchant and manufacturer, founded the Eickhorn company in 1865. However the Eickhorn family had been involved with the cutlery business for nearly 500 years prior to Carl establishing the company. The first “Eickhorn” (spelled Eykhorne in the reference) to be involved in the trade was hardening blades in 1356! Eickhorn purportedly first used their iconic “Squirrel” logo in 1607, but due to disputes among various Solingen makers as to the ownership of the logo, Eickhorn did not obtain complete legal control of the logo until after World War I, around 1920.

This German M-1884/98 3rd Variant Bayonet is in about VERY FINE condition. It is a pre-war production variant, which was manufactured in 1939. The bayonet is clearly marked on the obverse ricasso with the serial number 8897 / a. The matching serial number is present on the obverse throat of the scabbard as well. The reverse ricasso of the bayonet is marked: CARL EICKHORN. The spine of the bayonet blade is marked 39, just forward of the guard, and the reverse of the pommel cap is double stamped with a pair of clear Nazi Eagles over the Waffenamt mark WaA 253. This is the correct inspectors mark to be found on Eickhorn bayonets produced during that era. The blade of the bayonet is full length and unsharpened. The blade retains about 90% of its original blued finish, with most of the loss along the high edges of the bayonet, due to insertion and removal of the bayonet from the scabbard. The blade edge does have a couple of very tiny, “flea bite” nicks from actual use, but these are almost invisible and are only really noticeable if you run your finger along the edge of the blade. The hilt retains about 85%+ of its original blued finish, mixed with a plum brown patina. There is some minor surface oxidation and freckling present on the hilt, primarily on the reverse pommel cap and along the upper edge of the hilt. The bayonet locking catch is present and functions smoothly. The original Bakelite grip panels are in place, secured by their original screws. The dark brown Bakelite grip panels are free of any breaks, cracks, chips or repairs. However, they do show some light scuffing and minor surface scrapes from carry and use. The bayonet is accompanied by its original blued steel scabbard, which is numbered to the bayonet on the obverse, just below the throat. The reverse of the scabbard is marked, just below the throat: CARL EICKHORN / 1939. The scabbard retains about 85%+ of its original blued finish, mixed with a plum brown patina, with some minor fading and dulling as well. There are some scattered patches of light surface oxidation and minor freckling on the surface of the scabbard, and most of the finish loss is due to rubbing at the contact points with the leather frog. The scabbard is free of any dents or dings, and shows only some light scuffing and minor handling marks from actual use and carry. The bayonet scabbard retains its original leather belt frog, complete with hilt retaining strap and aluminum closure button. The frog shows use, crazing and wear, and retains only about 50% of its original black finish. The balance of the frog is a dark brown, natural leather color. All of the original stitching is in place and remains tight and secure. This early production frog bears no maker or ordnance code marks, and is entirely sewn, without any rivet reinforcements. The leather remains in strong, supple condition and the frog is fully useable and ready to be mounted on a belt for display.

Overall this is a really high condition example of a pre-war German M-1884/98 3rd Variant Bayonet. The bayonet was produced by Carl Eickhorn, one of the most famous of the Solingen cutlers, and is well marked and all matching throughout. If you have a really high condition 1939 production Mauser k98, this would be a fantastic addition to the gun, and if you simply collect German bayonets, this is a really fine, early production bayonet that was manufactured and in the field prior to the invasion of Poland.