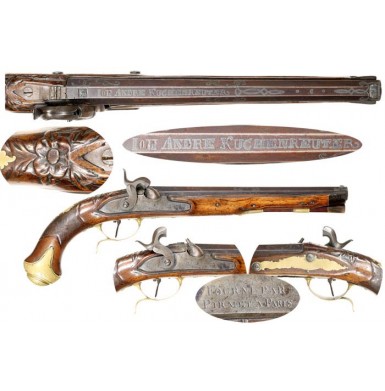 This is a lovely example of a high-grade flintlock (later percussion altered) pistol produced by the famous Bavarian gunsmith Johann Andre Kuchenreuter. Kuchenreuter was part of a dynasty of Bavarian gunsmiths that produced high quality arms for many of the royal houses of the various Germanic states and Austria. Johann was born in the 1730s and went into the family business in Steinweg (near Regensburg), Bavaria in 1758. He worked there until his death in 1808. He was noted as being a gunmaker to the Princely House of Thurn und Taxis. Kuchenreuter weapons are famous for their use of silver inlays and incised carved stocks. His pistols regularly included rifled bores and multi-leaf rear sights that were well ahead of their time. Even his smoothbore pistols often included the leaf rear sights. Kuchenreuter produced high-end flintlock sporting arms, including rifles and shotguns, as well as exceptional pistols. The quality of his pistols is such that many were converted to percussion over the years, to remain in use. Today, Kuchenreuter pistols in their original flintlock configuration are very scarce, but any high condition Kuchenreuter pistol is a very desirable item.

The Kuchenreuter pistol offered here is in FINE condition and is a wonderful example of his exceptional artistic skill and quality craftsmanship. The gun likely dates to the latter part of Kuchenreuter’s career (circa 1790-1800). The pistol bears a strong resemblance to both Germanic and French cavalry pistols of the late 18th and early 19th century. The pistol is a fairly high-grade gun, with checkered grip, carved decorations, fine brass mountings and silver inlays on the barrel. The top flat of the barrel is inlaid in silver with the maker’s name: IOH ANDRE KUCHENREUTER(the “I” is the archaic form of the letter “J”). In addition to the name, the barrel is inlaid with silver boarder decorations at the breech and muzzle. The lock is marked in two lines: FOURNI PAR / PIRMET À PARIS (Provided by Pirmet of Paris). François Pirmet was an equally famous gunmaker as Kuchenreuter, who worked in Paris circa 1779-1818. The marking suggests that Pirmet retailed this Kuchenreuter pistol.

The pistol is about 15 ¾” in overall length, with a 10” swamped octagonal barrel. The barrel is retained by a single tang screw and a pair of pins through the stock. The gun is approximately .50 caliber (about 12.5 mm) and is smoothbore. The pistol is mounted with brass furniture, consisting of a lobed brass buttcap, a 4 ½” flat, two-screw sideplate with scalloped edges, a triggerguard with an added finger spur, a wrist escutcheon and a pair of ramrod pipes. The escutcheon, triggerguard finials and sideplate edges all have the same decorative edge motifs but are otherwise unadorned without any engraving. Only the buttcap shows incised decorative lines. The stock terminated in a horn forend cap. The breech of the pistol is inlaid with a gold washed makers silver maker’s mark, but most of the gilt is worn away. The breech is mounted with the Kuchenreuter trademark multi-leaf rear sight, with a central fixed blade and a pair of folding blades for longer range shooting. The front sight is a German silver blade, mounted in a dovetail cut. The brass furniture has a medium bronze patina. The lock plate is 4 ½” long, flat with a slight bevel at the edges and with a small teat at the rear terminus. The lock was skillfully altered to percussion at some point in time, with the external components removed and the associated holes plugged. A flat necked percussion hammer was added, with a finely checkered spur and a faceted nose. A sweeping percussion bolster was brazed over the flintlock touchhole and is supported by the pan recess of the lock plate. The trigger mechanism is an exceptionally crisp single set trigger that works perfectly as well. The metal of the pistol is in FINE overall condition, retaining strong traces of the original thinning and fading browned finish on the barrel as well as traces of case color on the lock. The silver barrel inlay and decorations are nearly all complete, with only some minor loss in the letters “O” and “H” in Kuchenreuter’s name. The metal in nearly all smooth with only some lightly scattered pinpricking and some freckled surface oxidation, although some light pitting is present around the percussion bolster. The bore of the pistol is in FINE condition and remains mostly bright with only some lightly scattered flecks of oxidation and pinpricking. The furniture grade walnut stock of the pistol is in VERY GOOD to NEAR FINE condition as well. As noted the stock is decorated with well executed raised carvings consisting of floral patterns. These are located between the barrel tang and the wrist escutcheon, as well as between the triggerguard tip and the entry pipe. Carvings additionally surround the breech plug tang. Cleanly carved incised lines are present along the upper edge of the forend as well. The grip is finely checkered. The checkering shows some wear and softening of the sharp edges from handling and use. Otherwise the stock retains sharp edges and fine lines and shows no indication of having been sanded or refinished. There are a number of minor handling marks, bumps and dings on the stock, but no signs of abuse. The stock is solid, full-length and free of breaks or repairs. However, the stock does show some grain cracking on the reverse of the forend, with several cracks that vary from about 1 ¾” in length to as long as 3 ¾” in length. The horn tip shows some minor chipping on the reverse as well. A small sliver of wood is also missing from the forward portion of the forend on the obverse, but this is a very old sliver, as the area is worn very smooth form handling and use. What appears to be the original horn-tipped wooden ramrod is in place in the channel under the barrel, secured by a brass thimble and entry pipe. The rod fits the channel and thimbles perfectly and is exactly the right length for use with the pistol, measuring 10” as well. The rod shows age and patina that matches the pistol perfectly.

Overall this is really a very attractive example of a high quality German flintlock pistol from the late 18th or early 19th century that was later altered to percussion to remain in service. Kuchenreuter was a premier gunmaker to the royalty of the era, and his guns were clearly prized possessions of their owners. The pistol was retailed by an equally famous Parisian gunmaker, who was a contemporary of Boutet, and whose work is in the collection of the Metropolitan Museum of Art. The condition of this pistol shows that while it was actually used, it was never abused. It is rare to find a delicately carved pistol of this quality and age without at least a few minor repairs to the stock. This gun is free of any such repairs and other than the minor grain cracks on the reverse of the forend, the gun is really in wonderful condition considering it is more than 200 years old. The stock of this pistol is really about as good as one could hope to find on a pistol of this age. The lovely, untouched look of the metal is very striking, as are the lovely silver inlays on the barrel. For any collector of quality early European arms, this would be a fantastic addition their collection and is of the quality and condition that it could easily be a featured part of that collection.