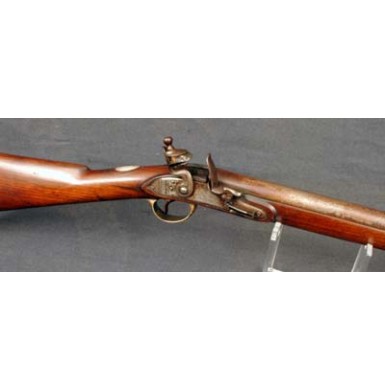 Here is a very fine displaying, and very high quality example, of one of the least researched of the secondary US martial long arms, the New England Militia (or Massachusetts Militia) Musket. These unique muskets represent a special class in US military long arms, and have some unique features. They typically show a combination of both military and civilian styling, with the gun appearing more “military” from the front of the lock to the muzzle, and having a more “civilian” style of construction from the lock back. Often they combined both American and imported parts, and sometimes even included salvaged parts from other military long arms. In general the guns followed the patter of older style weapons with a pin or wedge retained barrel, brass ramrod thimbles under the stock and a current style US military barrel that would accept the current socket bayonet in service. Although the barrels were often of the same caliber as currently in use and followed the general contours of military barrels in use, they were often shorter and the entire musket was made lighter and handier “ much like a European Officer’s Fusil. Typically the locks were civilian style and were often imported from England. From the lock back, the guns often took on the shape and feel of civilian hunting or sporting arms. The guns were typically produced in New England (mostly in Massachusetts) for use by state and local militia units, and they were primarily produced from about 1800 until the mid 1830’s.

This musket is a text book example of a New England Militia Musket, but is of a higher grade in overall construction and decoration, making it likely to have been an American Militia Officer’s Fusil or even a presentation musket intended as a gift to a local Native American chieftain. The gun is just over 57” in overall length and has a military style barrel that follows the general form of a US M-1816 barrel. The barrel is 42” long and is .69 caliber, with a top mounted bayonet stud that is positioned to accept the standard US M-1816 style bayonet. The breech is marked with the expected P firing proof, within a depressed circle to indicate that the barrel had been proven. It is also marked with the inspectors initials LH as well as the date 1824 surmounted by an M, typical of Massachusetts muskets of this era. The lock is of the typically stepped rear British style seen on many civilian arms of the period. The lock is simply marked ADAMS and features light, attractive engraving both on the plate and the cock. The jaws of the hammer hold a very old piece of flint, with an ancient leather wrap, that may well be from the original period of use. The lock is high quality and incorporates a simple and elegent gooseneck cock and a roller frizzen. It has an integral bridled iron flash pan with a rounded profile. The gun is in original flint with no alteration, and shows wonderful erosion in the touchhole area. The lock functions exactly as it should and remains crisp and tight. The barrel is mostly smooth metal with a mottled brown patina over a medium dark gray steel color. There are some scattered areas of roughness, especially along the edges of the barrel where the stock and barrel meet, indicating that the gun was probably stored while it was slightly damp, at some point in time. The gun features a rudimentary rear site, located on the barrel tang. The barrel is retained via three wedges, which pass through German Silver stock escutcheons, and the single tang screw. The gun is mounted with brass hardware, including 3 ramrod thimbles, two lovely lock screw escutcheons, the trigger guard, the nose cap and the buttplate. The lock screw escutcheons, trigger guard and buttplate are nicely and neatly engraved, an enhancement not typical of the standard militia musket. The brass all bears a wonderful dark, untouched patina, except for the rear most ramrod thimble, which appears to have been lightly cleaned at some point in the fairly recent past. The middle thimble shows some minor deformation on the leading edge, typical when iron ramrods are used with brass thimbles. The wrist is also inlaid with an engraved German Silver oval and further enhanced by lovely silver wire, which is inlaid in the wrist around the oval and around the barrel tang. The wire is 100% present, firm and tight. This level of decoration is very rare in these types of muskets. A nearly identical example, also marked Adams, but without the engraving and silver wire inlays is shown as Figures 413 & 414 in Robert Reilly’s United States Martial Flintlocks on pages 116 & 117. Like the example pictured in the book, this one has no sling swivels, nor any provision for them. The gun retains its original, full-length iron ramrod with a button head. The rod does not have any threads on the end, and may not have ever had them.

The stock is in very fine condition as well and is made of a lovely piece of walnut with a great color, grain and a nice patina. The stock retains very sharp edges and shows only minimal, normal wear with the typical bumps and dings from service. There are no breaks or repairs visible in the stock and it is solid and fine overall. There is a minor and very short surface grain crack, less than 1" long to the rear of the lock plate teat. The stock has a wonderful light construction and contours that make the musket feel and handle like a fine sporting arm and not a military musket.

Overall this is a really fine and very attractive example of an early American musket that likely saw use not only in a New England militia group prior to the Civil War, but could well have seen service during the Seminole Wars and in Mexico among the US volunteers. The gun is in much finer condition than they are typically encountered in, as these muskets were used to put food on the table as much as they were to defend American freedom. The gun is also unique due to the high level of embellishment present with the engraved brass and decorative inlay. Any collection of US long arms needs at least one representative example of these attractive guns, and this is a really superior example.