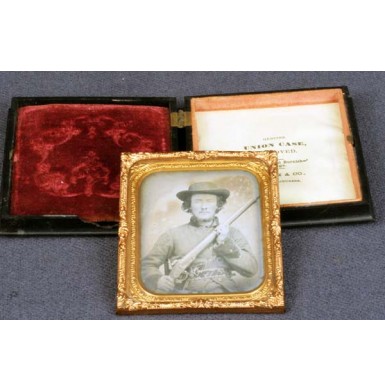 This is a fabulous 1/6th Plate Ambrotype of a double-armed Confederate soldier. The image is fresh from a West Tennessee Estate in Carroll County, just outside of Memphis. The image comes from the Robeson family, which had a number of ancestors who fought on the Union side during the war. The image is mostly likely a relative of the Robeson family (possibly a cousin, brother-in-law, etc) who fought on the Confederate side. The family feels it may be a member of the Montgomery family, relatives of theirs, who lived in Carroll County, TN. Some investigative research reveals 4 possible CS soldiers with the Montgomery last name who fought with West Tennessee regiments from the Memphis area. Two were brothers who served with the 154th TN Infantry Regiment and two were brothers who fought with 55th TN Infantry Regiment (Brown’s) “ two companies from 55th were raised in Carroll County.

The young soldier proudly holds his US M-1842 Musket at “port arms’ and in his belt is a scarce Warner’s Pocket Revolver. The Warner appears to be a Second Model, Second Variation .31 caliber pistol with a 4” barrel. This a very rare gun to be seen in a period image of any sort. The gun is stuck in our soldier’s fancy double billet roller buckle belt. The buckles are just visible under his right elbow (as we view the image, in reality it is his left elbow, as the image is actually a mirror image). He is wearing a very distinctive, early war Tennessee style frock coat, which appears to be of a gray material, with contrasting (probably dark blue) cuffs and collar. The exact same style of frock coat can be seen in the identified image of Samuel H Dunscomb of Co E 3rd Battalion TN Infantry (aka Memphis Battalion). The image is from the David Wynn Vaughan collection and a copy of the Dunscomb image is at the end of the pictures of this image. More information regarding the Dunscomb image and the uniform he is wearing can be found in Ron Field’s UNIFORMS OF THE CIVIL WAR and his Brassey’s Military History of Uniforms Series book AMERICAN CIVIL WAR: CONFEDERATE ARMY. Dunscomb is wearing an identical frock coat in the image, and is also wearing a civilian style “slouch hat” and is also armed with a US M-1842 musket. This identification of the style of the coat confirms the West Tennessee provenance and family history, and raises the possibility that this pattern of coat was produced in the Memphis, TN / Shelby County area during the early days of the Civil War.

The image is in VERY GOOD+ to NEAR FINE condition and is an ambrotype that measures approximately 3 ““ tall by 2 ““ wide. The image is very clear, with some minor discoloration and haloing present “ although they do not significantly affect the content of the image. There are a couple of tiny emulsion dots present on the image “ mostly along the lower edge right at the boarder of the matte. Only one significant one is present in the image, a small dot under the right (image right) side cuff. Thankfully that small dot does not interfere with or obscure any of the content. There are some much tinier scattered dots present, as well as some very tiny and minor rubs that have resulted in some very minimal image degradation. The soldier has very clear, piercing eyes, and it is quite clear that he is ready to go off to war. The top button of his frock is unbuttoned, revealing his homespun, linsey-woolsey shirt underneath. The image is so clear that you can see the X-stitch that his holding the four-hole bone button on at the collar of the shirt. The soldier’s curly hair is peaking out from under his civilian flat top bowler hat, and his chin whiskers and scraggly mustache belie his youth. The image is protected by a single sheet of glass, a brass matte and a foil keeper that mounts it all together. The image is backed by a piece of black cloth, although a more effective black background would improve the overall contrast to the image. The image is housed in a lovely thermoplastic case with a fleur-de-lis central motif, surrounded by floral images and vines. The case is marked behind the image:

GENUINE
UNION CASE,
IMPROVED.
Fine Gilt and Burnished
Hinge
S. PECK & CO.,
MANUFACTURERS.
The case is in about FINE solid condition with excellent hinges and latch. The maroon velvet pillow is in fine condition as well. The only damage to the case is a small chip missing from the bottom edge of the front lid, about ““ deep and ““ wide. The chip in no way affects the displayability of image or the case, and is in a very unobtrusive location.

Overall this is just a wonderful, clear and crisp image of an early war West Tennessee Confederate soldier. He has a great Tennessee frock coat, is double armed with a very scare revolver and has a great look to him. With a little luck and some good research, this image could well become a fully identified image, enhancing its value even more. If you like CS images and especially early war Tennessee images, don’t miss you chance to obtain this fine ambrotype.