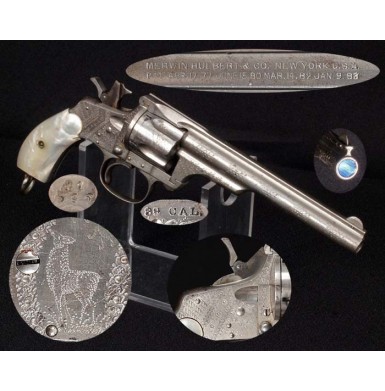 Overall this is a really EXCELLENT condition example of the Merwin, Hulbert & Company “Automatic” 38 Caliber Double Action Revolver. The gun is simply stunning, retaining nearly all of its original nickel finish, along with the wonderful factory engraving and the lovey mother of pearl grips. Over the last two to three decades, the guns of Merwin & Hulbert have really come into their own and have finally achieved a notable place in realm of historic and collectible firearms. Today’s collectors appreciate the quality craftsmanship and mechanical engineering of what quite possibly were the finest made revolvers of the late 19th century. As a result, Merwin & Hulbert prices have climbed steadily over the last few years and are continuing to increase. The desirability for high condition examples, oddities and factory engraved specimens have driven the prices for those guns at an even greater rate. This has resulted in very high condition factory engraved Merwin & Hulberts selling for as much as 3 to 4 times the price of a comparable condition revolver without the factory enhancements. This is a really outstanding, investment grade example of a factory engraved a Merwin, Hulbert & Company “Automatic” 38 Caliber Double Action Revolver, in a rarely encountered state of preservation. This gun will be a wonderful addition to any collection of Merwin & Hulberts, of high condition or engraved guns of the old west, or simply as a long-term investment. As a good friend of mine and long time dealer in antique arms likes to say: “Pretty always sells”, and this gun has “pretty” in spades!