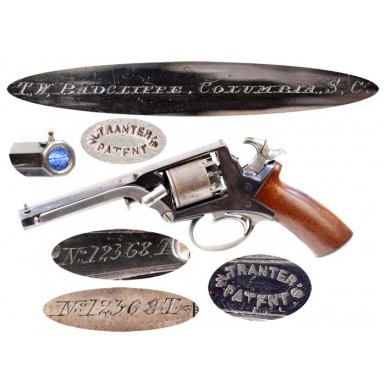 All of this evidence indicates that at least some of the Tranter revolvers produced during (as well as prior to) the Civil War, saw Confederate use. At least one Tranter that I previously owned was most likely imported by Schuyler, Hartley & Graham of New York. The gun was an engraved, nickel-plated 4th Model 54-Bore revolver with relief-carved ivory grips. The gun was serial number 13619T. Dating Tranter revolvers based upon their serial numbers is somewhat problematic, as frames were sometime produced in advance and the guns completed at a later date. What we do know is that the “T” serial number suffix came into use around serial number 2200, sometime between 1854 and 1856. We also know that Tranter produced revolvers using Adams patent serial numbers and a “Y” suffix from about 1853 through about 1856. These guns appear in several serial number ranges, as assigned by Adams, including the 2X,XXX range. From extant examples of Tranter’s with specific dates associated with them, it appears that those Tranter revolvers with serial numbers under about 20,000 (and possibly some of the early guns in the 20,XXX range) with T suffixes were produced prior to the end of 1865.

This particular 4th Model Tranter Revolver is in about EXCELLENT condition and is one of the extremely scarce pistols that is retailer marked by T.W. Radcliffe of Columbia, South Carolina. This exact pistol is pictured and discussed on page 245 of THE ENGLISH CONNECTION by Russ A. Pritchard Jr. & C.A. Huey. Although sources vary, it appears that Thomas W Radcliffe was born on March 8, 1812 in Richmond, VA. At some point he moved to Columbia, SC where he established himself as jeweler, watchmaker and seller of “fancy goods”, not unlike another Tranter retailing firm in New Orleans, Hyde & Goodrich. Radcliffe had initially been a partner in Radcliffe & Guignard in Columbia from 1858, and then went into business for himself. He briefly partnered in 1861 with William Glaze (of Palmetto Armory fame) during 1861 as Glaze & Radcliffe, and then returned to working on his own through the end of 1865. According to the 1860 Census, Radcliffe was running quite the successful operation. He was listed as owning real estate valued at $6,000 and having a personal estate valued at $25,000, which was an astronomical sum during the period. According to www.measuringwealth.com $25,000 in 1860 would be equivalent to $735,000 in purchasing power today, but would also have the equivalent economic status in 2015 as a person with a 10-million-dollar net worth! These figures help explain how Mr. Radcliffe could maintain a household that included 10 other people including his wife and 9 children between the ages of 2 and 21. An advertisement for Radcliffe’s establishment in the Columbia Daily Phoenix from the period reads in part:

This very desirable southern retailer marked 4th Model Tranter Revolver is one of the rare mid-sized 80-Bore revolvers (about .387 caliber). These 80 bore guns were particularly popular in the south as they represented the English equivalent of the equally popular Colt M-1851 Navy revolver with its similar caliber. The topstrap is neatly engraved in a single line:

The left side of the frame is crisply marked in a two-line cartouche: W. TRANTER’s / PATENT, along the lower edge, between the front of the triggerguard and the loading lever mounting screw. The pistol is serial numbered No 12368T on the right side of the frame, with the same serial number found engraved on the case hardened cylinder as well. Although Tranter’s are certainly very difficult to date based upon serial number, and no reliable factory records exist to confirm production or shipment dates, I firmly believe that this gun was manufactured circa 1861. The 12,000 range is the last of the T-suffix serial number ranges in which southern retailer marked Tranters regularly appear, suggesting that by the end of the 12,000 range regular importation of these guns had been severely curtailed. Most of the New Orleans retailer marked Tranters appear in the 8,XXX to 11,XXX T-suffix range and are most likely from the 1856-1860 production period, with the occasional example found in the earlier Y suffix range circa 1853-1856. As noted above, the revolver is in about EXCELLENT condition. The gun is in extremely crisp condition with sharp edges and lines throughout. The gun retains about 85%+ of its original blued finish, with some minor flaking and finish loss from wear along the sharp edges of the topstrap and around the muzzle. The only part of the revolver to show significant finish loss is the triggerguard, which has had most of its finish flake away, leaving a smooth grayish-brown patina. The 4 ““ octagonal barrel bears the expected Birmingham commercial proof marks of crowned crossed scepters the left angled flat, just in front of the frame juncture. The cylinder is well marked with the usual Birmingham commercial proofs between the chambers. The cylinder was case hardened, as were many Tranter and Adams cylinders, and retains about 80%+ coverage of the case coloring. The case coloring has dulled and faded slightly and is slowly starting to develop a smooth brown patina. The mottled shapes and coloration remain with solid coverage, although the coloring is not as vivid as when new, and the blues, browns and purples remain in mostly muted tones. The cylinder appears to retain all of its original cones, and they are all in very crisp and fine condition with sharp edges and no significant battering or damage. The butt cap and backstrap are both case hardened as well and retain similar amount of coverage and vividness as the cylinder. The bore of the revolver rates about VERY FINE+ to NEAR EXCELLENT as well, with sharp five-groove rifling, with the grooves being about twice as wide as the lands. The bore is mostly bright and shows only some very lightly scattered pinpricking along its length. The metal of the pistol is smooth and is essentially free of any pitting, with only some very lightly scattered areas of minute pinpricking, mostly around the chamber mouths, the muzzle and the frame forward of the chamber mouths. Unlike many Tranter revolvers this one is plain with the only engraving being some light lines at the muzzle and boarder lines around the edges of the frame and the cylinder faces. The right side of the frame retains both the original Tranter’s patent pivoting hook safety as well as the patented S-shaped spring catch that retains the cylinder arbor pin. Both the safety and the arbor pin catch are in fine condition and both are fully functional. Both retain large amount of their original brilliant purple tinged fire blued finish, as does the cylinder arbor pin. The original Tranter “3rd-Model” loading, screw secured loading lever is attached to the left hand side of the frame. The loading lever is marked with a two-line cartouche that reads: W. TRANTER’s / PATENT, just like the frame. The lever functions smoothly and locks securely into place. The original front sight is in dovetailed in place near the muzzle as well. The lever is in the white and shows no indication of having been finished originally. The smooth walnut grip is in about EXCELLENT condition as well, and matches the condition of the pistol perfectly. Tranters are almost always encountered with checkered grips, and smooth grips must have represented a special order. Interestingly, another T.W. Radcliffe retailer marked Tranter (#12371T) is known, that has the same pattern of smooth grips. This gun is also an 80-Bore 4th Model revolver, and is only 3 numbers away from this one, suggesting that Radcliffe ordered at least a handful of smooth gripped Tranter revolvers as the clouds of war darkened over South Carolina. The grip is solid and free of any breaks, cracks or repairs. The grip does show some minor marks and small dings from handling and use, but is free of any significant wear or damage. The revolver is mechanically EXCELLENT and the gun times, indexes and locks up, exactly as it should. Both the single action and double action mechanism of the pistol function crisply with no noted issues.

Overall this is a really gorgeous example of a medium bore 4th Model Tranter percussion revolver with a very scarce and desirable South Carolina retailer mark. The gun is 100% complete, correct and original in every way. While southern retailer marked English revolvers appear on the market from time to time, they are usually New Orleans guns. South Carolina guns almost never come up for sale, especially such a wonderful example as this one. Even more important, the gun is published in the best currently available work regarding the arms imported from Great Britain by the south, and it is pictured and discussed in that text. Don’t miss your opportunity to obtain an extremely rare TW Radcliffe, Columbia, SC marked revolver in wonderful condition with outstanding eye appeal and with published provenance. This is a gun that deserves a central position in a very advance collection of Confederate imported arms and English revolvers, and I have no doubt that you will be extremely proud to own it.