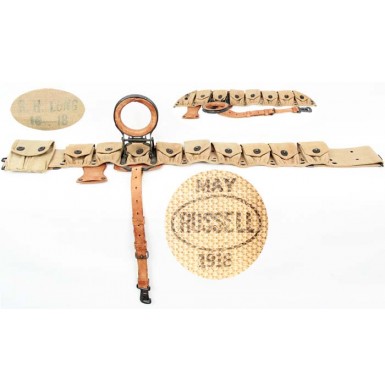 This example of the scarce Experimental M-1903 Cavalry Belt is in about VERY FINE to NEAR EXCELLENT condition. The belt is 100% complete and correct and is fully functional, showing little (if any) use. The belt was produced under contract by Russell and is clearly marked with a black ink stamp, inside the forward most ammunition pocket flap: MAY / RUSSELL / 1918, with the “Russell” name within an oval. The inside flap of the .45 magazine pouch is marked in a somewhat faded blue ink stamp: R. H. LONG / 10-18. Although there is no indication that any of the M-1912 experimental accouterments were ever issued for service in the First World War, it is nice that both pieces are manufacture dated prior to the armistice in November of 1918. All 9 of the ammunition pockets are of the correct “puckered bottom” design used by Russell when weaving their web ammunition belts. All of the closure snaps function correctly and all of the ammunition retaining straps are in place inside the pockets. The leather attachments are in excellent condition showing only some light age scuffing and minor surface wear, but no significant discoloration or wear. All of the leather remains supple and functional. The rifle ring operates as it should, and snaps securely into place at a 90-degree angle to the belt, and squeezing the releases inside the mount allows it to fold back down again smoothly. The leather rifle hanger strap retains its original adjustment buckle and triggerguard snap, both of which are still completely functional. All of the metal hardware retains about 90%+ of its original blued finish with only some minor wear and fading and some lightly scattered oxidized freckling mixed with the blued finish. The woven belt is in strong and complete condition with only some minor discoloration due to storage and possibly moisture. The stitching is all tight and sound, as is the weaving of the webbing, and the cloth shows no significant wear. The belt would certainly be quite usable today, if you were so inclined.

Overall this is a really fantastic example of a very scarce experimental US military belt system from the last days of the horse cavalry and immediately before the creation of the armored cavalry. The belt is great shape with only some light staining and is 100% complete, correct, original and functional. This would be a great addition to any advanced US cavalry collection and is one of those center piece accouterments that you will be very proud to display with your other early 20th century through WWI cavalry gear.