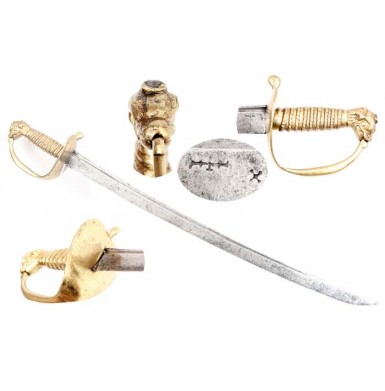 This is really attractive example of a pre-American Revolutionary War era British Infantry Hanger in about FINE condition. 18th century British military sword patterns are very difficult to date specifically, or attach official pattern dates to, until the latter portion of the 1700s. Sword collectors and researchers attach pattern dates as terms of convenience to the British swords of this period, often based upon the year that a particular style of sword appeared in a painting with a known date of production, or based upon some other known specific time reference. The Colonel’s of 18th century British infantry regiments raised the regiments and equipped them at their own expense, resulting in a fairly substantial amount of variation in the pattern of equipment issued. Often items were similar to those used by another regiment, but had different features or details, and in most cases the single biggest concern to the colonel was what price the item could be had at. This British infantry hanger generally conforms to what most collectors would call a Pattern 1742 infantry sword, but has some non-standard features as well. During the majority of the 1700s the infantry short sword was considered an essential part of the infantryman’s equipment, and was carried in addition to the equally important bayonet. Continental volunteers serving with Washington’s army, who often provided their own weapons (at least initially), were asked to provide a short sword or belt axe, in addition to a bayonet, if possible. The Pattern 1742 was a simple, sturdy infantry sword with a slightly curved, single edged blade that was roughly 2 feet long, and a cast brass hilt. The simplest versions of these swords had limited ornamentation, and simple bulbous pommel caps, with the blade secured by peening the tang against the pommel. Examples of these swords that saw use in American during the American Revolution are widely varied, and are represented by swords manufactured from the mid-1720s through the mid 1760s. As the sword pattern evolved, more complicated and decorative cast hilts became more popular, and often the guards were enhanced with extra branches, both to protect the hand and to improve the visual appear of the sword. The swords provided to the Grenadier Company of each regiment were usually of somewhat higher quality and more elaborate than those issued to the line companies, which was fitting for the company that was generally considered the more elite troops of the regiment. Even musicians carried a sword based upon the Pattern 1742 and later Pattern 1751. These swords (after 1768) were sometimes issued with clip-point “scimitar” like blades, and had more elaborate hilts as well. As the hilts became somewhat more elaborate, crude lion’s heads, often resembling a gargoyle or sea monster more than a lion, came into fashion with some of the more elite regiments.

This British Infantry Hanger is particularly attractive and high quality. The sword is solid and sturdy, but remains relatively light weight and weighs in at a handy 1 pound, 4 ounces. Weight is always of supreme consideration for the equipment of any infantryman, and this sword remains serviceable and well balanced, without being excessively heavy. There are three major components to the sword, the cast brass hilt, the cast brass guard and the blade. The brass hilt is somewhat crudely cast with the classic “lion’s head” or “gargoyle” figure as its pommel cap. The hilt itself has a rectangular cross section and not the more common oval that is usually encountered on these swords, and has a braided rope design cast integrally into the grip. The 9 “ cast rope ridges that encircle the grip would certainly have improved the grip of the soldier on the sword, when his hands were wet, muddy or bloody. This same pattern of gargoyle head, braided rope hilt with a rectangular profile is depicted on page 309 of George Neumann’s Battle Weapons of the American Revolution. All three infantry hangers on the page have the same basic hilt design, with different guard patterns and slightly different blades. The top example is simply noted as being an English Hanger circa 1730-1750, the middle example is an English Musician’s Hanger circa 1745-1765, and the final example is an English Grenadier Hanger circa 1750-1780. None has exactly the same pattern guard as this example, but one is similar and two have very similar blades. This hanger is probably circa 1750-1760, although it could be slightly earlier or later. The guard of this example is a somewhat crudely executed, solid heart shape with a single curved knuckle bow that terminates in the mouth of the gargoyle. The lack of additional guard branches suggests that this is standard infantry hanger and not a grenadier hanger. A simple, slightly forward swept, kidney shaped quillon tops the heart shaped guard. The simple, single edged blade is 24 ““ in length and has a single, narrow 19” fuller near the spine. The blade is secured to the hilt by peening the tang at the tope of the gargoyles’ head. The reverse ricasso of the blade is marked with two geometric line based symbols, one a stylized “X” and the other a longer symbol. These are probably a cutler’s maker mark, but could be simple decoration. It is difficult to know if the blade is of English or Solingen manufacture, as no definitive maker marks are present. Otherwise, the sword is unmarked.

The sword is in about FINE condition overall. The blade has a mostly smooth, pewter gray patina, with patches of darker age oxidation scattered along its entire length. The blade shows no pitting, but some light surface roughness and some scattered pinpricking is present, again scattered along the length, but most concentrated near the tip. The edge is in very nice condition, and shows only some very light, skillful sharpening, likely from the period of use. A number of very minor dings are present in the cutting edge, indicative or real world use, but not abuse. These dings are not particularly visible, unless you sight down the sword edge in good light, but can be felt if you gently run your finger or thumb along the edge (not a recommended action). The blade remains securely attached to the hilt, and exhibits only the most minor wobble when the hilt is shaken vigorously. The case brass hilt and guard are in FINE overall condition. The casting is somewhat crude, but typical of a 250+ year old “lowest big” infantry hanger, and still of much higher quality than the more simply cast swords that are more often encountered. The gargoyle pommel cap is quite ugly (in a good way) and resembles a very crude version of the latter day English “Dolphin Head” that adorned naval swords in the mid-19th century. The hilt is free of any damage or excessive wear. The brass has been cleaned at some point and has the bright finish that it would have had when it was originally issued. There is some very minor wobble between the guard and hilt, but it is minimal and simply the result of more than 250 years of age, combined with normal wear and use. The guard remains securely fastened and the joint between the knuckle bow and the pommel remains secure.

Overall this is a very attractive example of a British Infantry Hanger c1750-1760. The detailed casting in the brass hilt is much nicer than is normally encountered on these swords and the overall appearance is quite striking. This would be a wonderful addition to any collection of British military edged weapons from the colonial era, and would be equally at home in a French & Indian War collection as an American Revolution collection. These swords do not appear on the market on a regular basis and this one is substantially nicer than most examples that do. You will be proud to add this English hanger to your collection and will no doubt enjoy displaying it for years to come.