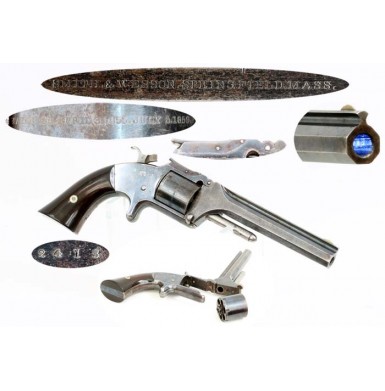 This is a VERY FINE example of one of the most popular metallic cartridge revolvers of the American Civil War period. The Smith & Wesson #2 Old Army revolver was a six shot, .32 caliber single action revolver that fired a .32 caliber rim fire cartridge. The pistol had a six shot cylinder and an octagonal barrel with a top rib. The revolvers were produced with 4”, 5” and 6” barrels, although the 4” barrel was discontinued during the first part of 1866 and was not available after April of that year. The revolver was introduced in 1861 and remained in production until 1874. During that time some 77,155 of the revolvers were manufactured. Those pistols under serial number 35,731 were produced prior to May 1, 1865 and are considered revolvers that may have seen Civil War use. The pistol used Smith & Wesson’s “tip up” design that they introduced with the .22 caliber #1 Revolver. To load or unload the pistol the release at the bottom of the frame was pushed, allowing the barrel to be tipped up and the cylinder removed. Pushing the chambers over the fixed ejector rod under the barrel ejected the empty cartridges, allowing fresh cartridges to be dropped into the chambers. During the early stages of production, it was discovered that the fragile cylinder stop located on the topstrap of the revolver was prone to breakage due to the stress of over travel. As a result, in early 1862 (between serial numbers 2,962 and 3,109) a third pin was added to the topstrap to restrict the distance that the cylinder stop could move. The early production guns, manufactured before the introduction of the third pin, are known to collectors a “2 Pin” revolvers, and are particularly sought after due to their very limited and early production. Less than “ of 1% of all Smith & Wesson #2 Old Model Army revolvers were produced in this “2 Pin” configuration. The early Smith & Wesson cartridge revolvers were very popular as personal side arms for soldiers and officers on both sides during the American Civil War. Smith & Wesson #2 Old Model Army revolvers were known to be owned and used by such diverse and historic figures such as Brevet General George Armstrong Custer and the infamous lawman “Wild Bill” Hickok. Period images regularly show soldiers with a #2 stuck in their belt. From the standpoint of size, weight and cartridge power, the Smith & Wesson #2 was probably one of the most practical pistols for company grade officers to carry in the field. It was lighter and easier to deal with than a Colt Navy or Colt Army percussion revolver and was more powerful than the popular .22 rimfire pocket pistols of the era.

This Smith & Wesson #2 Old Model Army Revolver is serial number 2413, which places its production very early in 1862, just as the American Civil War was really exploding into a massive conflict. The serial numbers for Smith & Wesson #2 revolvers produced in 1862 run from 2,123 through 10,511, with a production of 8,388 that year; about 161 revolvers per week. Based upon that average number of revolvers produced during 1862, it suggests that this revolver was likely produced during the second or third well of January 1862. The revolver is one of the very early and desirable 2 Pin revolvers. Interestingly it was also one of the last of that pattern, as about between 500 and 600 revolvers after this one, the “3rd Pin” was introduced in the topstrap. The serial number 2413 is very clearly stamped in the bottom of the grip frame and is also stamped inside of the right grip panel. The gun is mechanically excellent with a crisp action and a very tight lock up. The gun times and indexes exactly as it should. Typically, these “tip up” revolvers are found with excessive play in the hinge between the barrel and frame and they tend to wiggle. This one is nice and very tight. The top of the barrel rib is clearly marked in a single line with the typical Smith & Wesson information:

The April 3, 1855 date referred to the Rollin White patent for the bored through cylinder. The July 5 date referred to Smith & Wesson’s patent for an improvement to the frame design of their earlier No. 1 revolvers, which allowed larger caliber rimfire ammunition to be used more reliably, and the December 18th patent described in detail the revolver that would become known as the “No. 2”.

This gun has a 5” ribbed barrel, the most common of the barrel lengths, with the 6” guns the second most often encountered and the 4” guns the rarest. While 6” revolvers appear to have been the most popular for holster carry on a belt, the 5” guns were somewhat more versatile, large enough to carry in a belt holster and small enough to fit in many coat pockets. The gun has the matching assembly number * 115 on the face of the cylinder and on face of the barrel web, below the forcing cone. Only the * is stamped on the left grip frame under the grip panel. As noted, the gun is in about VERY FINE condition. It retains about 50%+ of its original blued finish overall, which shows even fading and wear from carry and use, as would be expected. The most obvious loss is due to high edge and point of contact loss along the octagonal barrel, and fading and wear along the sides of the barrel, the backstrap and grip frame. The blue on the cylinder has faded in patches (possibly where the revolver laid on fabric in a drawer) leaving patches of bright original finish, as well as patches of faded loss. The areas where the finish has faded and worn have developed a very pleasing plum-brown patina that blends well with the finish remaining on the balance of the pistol. The backstrap has a mostly dull gray patina with smoky blue hues and flecks of minor oxidized surface discoloration, along with traces of original blue. The areas of strongest and brightest blue are on the frame behind the cylinder and in the protected areas of the barrel along the rib. The metal of the revolver is almost entirely smooth, with some scattered light pinpricking present, mostly on the topstrap at the hinge, the muzzle, with more moderate pinpricking on the face of the cylinder, inside the frame and on the rear face of the barrel assembly. There are a few minor surface scratches on the revolver and a couple of small areas of lightly cleaned minor surface oxidation. The bore of the pistol is in about VERY GOOD+ condition. The bore is moderately bright with darker patches and some old oxidized discoloration. The rifling remains well defined with scattered light to moderate pitting along its entire length. The gun retains sharp edges along the octagonal barrel, and the original German silver sight blade remains in place at the end of the barrel. The crews remain crisp with practically no slot wear and all retain good amounts of original finish. The hinge screw and cylinder stop spring both retain large amounts of their original, brilliant fire blued finish. The hammer retains about 50%+ of its original case hardened finish. The mottled colors have dulled and faded, but remain quite visible, especially on the left side of the hammer, with the right side showing more wear and loss due to rubbing on the interior of the frame. The rosewood grips are original to the gun and are in about VERY FINE+ to NEAR EXCELLENT condition as well. They retain about 85%+ of their original varnish, with the only real loss being along the sharp lower edges of the grips. The grips are free of any breaks, cracks or repairs. The grips do show some minor bumps, dings and handling marks, but the grips remain extremely crisp overall. The only real condition issue are some small impact marks on the bottom of the left grip panel. The grips retain excellent, sharp edges, and they are very attractive, matching the revolver’s condition perfectly.

Overall this is a really wonderful example of one of the most popular Civil War era side arms. The gun is 100% complete, correct and original, and it functions perfectly. This is a very early production revolver and is one of the very desirable “2 Pin” revolvers. This gun represented the first truly successful, mass-produced American cartridge pistol that was chambered in a reliable caliber that could actually be called an “effective” combat or self-defense cartridge. All previously successful metallic American cartridge revolvers had been chambered in the anemic .22 RF short or in some strange patent cartridge that was expensive, unreliable and difficult to obtain. The Smith & Wesson #2 was a breakthrough revolver in these respects and is one that no Civil War handgun collection is complete without. This is a really fantastic example that will be a wonderful addition to your collection of Civil War era secondary martial revolvers. The revolver comes from the historic Norm Flayderman collection and retains his original handwritten tag which reads in part: “very fine, very scarce, early S&W Model 2 32RF “Army”. V. low number 2413 2 screw top strap.”. The tag is dated March of 2008.