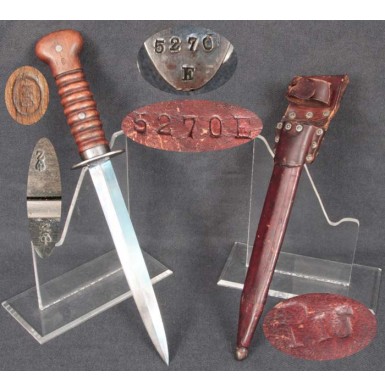 This is an outstanding condition example of the Dutch M-1915 Fighting Knife. The knife was known in Dutch service as the “Stormdolk”, and is often referred to by collectors as a Dutch Commando Knife, as some of the Dutch Commando forces that operated with the British during World War II chose to carry this knife rather than the British special forces standard issue Fairbairn-Sykes fighting knife. The knives were produced from 1915 until the Germans overran Holland in 1940. After the German occupation, many of the knives served as ersatz fighting knives for the German military, both in their original condition and sometimes as modified variants. The knife, as originally produced was manufactured with an 8” stiletto blade and had an overall length of about 13 “. The blade was heat blued and examples with large amounts of their original blade finish are truly striking. The solid wood wooden handle was oval in cross section, with eight grasping grooves to enhance the grip of the knife. The grip was otherwise smooth, with a bulbous pommel cap area. The blade was secured to the solid wood handle with a pair of rivets that were approximately ““ in diameter. A 3/16” wide metal ferrule reinforced the front section of the handle, butting up against an oval cross guard that was approximately 2 1/8” x 15/16”. The ferrule and cross guard were heat blued as well. The front of the crossguard was stamped with the serial number of the knife, and this same serial number was marked on the rear of the frog, which the leather scabbard was attached to. The ferrule, ricasso and wooden pommel cap were all marked with military inspection marks. The knife was carried in a brown leather covered metal scabbard with a steel ball tip. The scabbard was permanently attached to a leather belt frog via rivets, and the frog included a retaining strap to secure the hilt of the knife.

This example of the Dutch M-1915 Stormdolk Fighting Knife is in about EXCELLENT overall condition. The knife is full length and the blade retains about 85%+ of its original heat blued finish. The majority of the finish loss is from scabbard contact along the high edges of the blade or from simply fading over time. The knife shows only a handful of minor light finish scuffs along the edge, where it may have been very lightly sharpened during the period of use. There are also two very tiny and barely noticeable nicks along the upper edge of the blade, about 1 ““ from the point. The cross guard and ferrule retain about 70% of their original vivid heat bluing, with the majority of the loss the result of fading. The front of the oval guard is marked with the serial number 5270 / E. The obverse ricasso and grip ferrule are both marked with (CROWN) / Z inspection marks. The grooved wooden grip is in about EXCELLENT condition as well. The wooden pommel cap is marked with the usual Dutch military (CROWN) / Z inside an oval inspection mark, a larger version of the marks found on the blade and ferrule. The grip is smooth and free of any breaks, cracks or repairs. The grip does show some minor handling marks, along with some minor scuffs and dings. There are also a couple of minor flattening dings present on a couple of the raised grip rings, simply the result of use. The leather covered metal scabbard is in VERY FINE condition. The rear of the leather frog is marked with the matching serial number found on the crossguard, which is 5270 E. The scabbard shows only some minor finish loss and light scuffing, all of which are the result of use in the field. The only leather loss is a small amount at the tip, where it covered the metal ball at the end of the scabbard. The end of the front of the scabbard is stamped with what appears to read P 15 (or maybe P IJ), possibly a unit designation. The riveted leather frog is in FINE condition as well, and is securely attached. All of the original rivets are in place. The frog remains strong and supple and quite useable today. There is only one minor scar in the rear of the frog, which appears to be a flaw in the leather, more than a tear or rip. The original leather hilt-retaining strap is in place, along with the metal closure stud. As would be expected, the strap shows some moderate wear, crazing and light finish loss due to use. The strap still closes securely and retains the hilt as it should.

Overall this is a really outstanding example of a scarce World War I- World II era Dutch military fighting knife. When these scarce knives are found on the collector market, they are rarely found with their matching scabbard, and if a scabbard is present at all it is often mismatched. The knife is simply in wonderful condition with a really gorgeous blade with lots of the original heat blued finish. The knife and scabbard are 100% complete, correct and original and have not been altered in any way. This would be a fantastic addition to any advanced edged weapons collection that focuses on fighting knives from either of the World Wars, and would be a great addition to any collection that specializes in ersatz Nazi fighting knives. This is a piece that will make a striking addition to any collection and I am quite sure that you will be truly pleased with this very high condition example of a very rare combat knife.