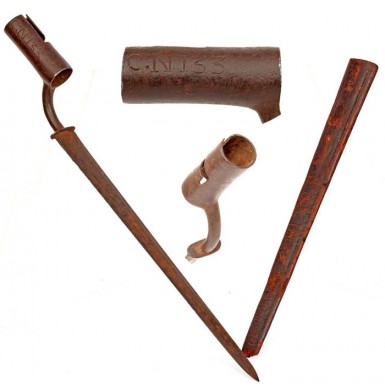 This is a very nice, untouched example of a scarce Colonial Era Dutch “ Germanic Socket Bayonet, complete with most of the original bayonet scabbard. These bayonets are quite distinctive, with their horizontal blades that have an overall flat appearance, but in fact are made of up three faceted faces on each side. The edges of the blade are sharp, as is the spear point tip. The blade terminates in an oval base guard where the neck of the bayonet meets the blade. A nearly identical example is depicted in George Neumann’s Battle Weapons of the American Revolution on page 293 as example 44BB. Neumann notes that examples like this have been recovered at both French & Indian War (Seven Years War) sites and Revolutionary War sites as well. Although the bayonets are sometimes mislabeled as “Hessian”, they are in fact of either Low Country (Dutch) or Li’ge (Belgium) origin, with the Li’ge examples being produced on contract according to the Dutch pattern. The “Hessian” association is no doubt from the fact that many of the German states mercenary troops that fought for the British during the Revolutionary War carried Dutch manufactured long arms, and as a result would have carried Dutch pattern bayonets as well. This particular pattern is associated with arms produced during the 1740-1760 period, but these arms and bayonets remained in service in the colonies through the end of the Revolutionary era. Dutch arms were very important to the American colonies, with some colonies relying upon Dutch arms almost exclusively during their initial colonization. New Amsterdam (later New York City) was initially a Dutch settlement in the new colony of New Netherlands and the Dutch remained active traders in the area long after the English captured the colony in 1664. During the years leading up to the French & Indian War, a number of Dutch pattern muskets were purchased by the British and provided to the Colony of South Carolina for the use their militia in protecting the colony from Indians and eventually the French. Similar shipments of English purchased Dutch muskets were sent to the colony of New York and the Canadian Maritime Provinces as well, during the decade leading up to the Seven Years War. During the French and Indian War, the British provide even more Dutch muskets to their colonies to arm the militias and volunteer regiments. Some 3,000 Dutch muskets were provided by the British in 1754 to help the Virginia and North Carolina militias that were defending the Ohio Valley frontier from the French and their allies, and an additional 1,000 Dutch muskets were provided in 1755 to arm the American raised 50th and 51st Regiments of Foot (Shirley’s & Pepperell’s respectively) that had been raised as part of what would become Braddock’s Campaign during the French & Indian War. During the American Revolution, there were a substantial number of Dutch made muskets in the colonies from use in earlier decades and many more were imported to help arm the colonial armies. Some were purchased by the various states and some were purchased directly by new American central government, and others were captured from Hessian mercenaries, primarily at the Battle of Trenton. In all cases, these muskets would have been considered essentially useless without their accompanying bayonet.

This Dutch Musket Bayonet c1740-1760 is in ATTIC FINE, untouched condition. The bayonet has a thick brown patina over all of the metal surfaces and shows some light scattered roughness and scattered surface oxidation over its entirety. The bayonet is about 16 5/8” in overall length, with a 12 ““ long 3-facet per side blade with an oval guard at the joint between the neck and the blade. The socket is 2 7/8” in length, with a simple L-mortise for a bottom mounted bayonet stud. The mortise cut is quite narrow for the stud, and the bayonet has a muzzle to stud distance of 1.115”. The bayonet was designed for a very large caliber musket (probably between .75 and .80) and has a muzzle diameter of .949”. As is typical of Colonial Era socket bayonets, the rear of the socket has no bridge and is open, allowing for the bayonet to be more easily adjusted and adapted to a variety of musket barrels. The right side of the socket is engraved with the rack number C : No 133. This suggests “C” company, man #133, and the matching number was likely engraved on the wrist escutcheon of the musket that this bayonet was intended to mate with. The majority of its original leather scabbard accompanies the bayonet. The scabbard has no tip, and probably never had a metal drag, but was likely a simply a leather scabbard that had its end conform to the bayonet tip. There is no frog present, but the remains of small stitching holes around the throat suggest the scabbard was at one time attached to a cross belt. The scabbard has a pair of decorative incised lines running down both edges of the front of the scabbard. The rear of the scabbard has a single seam running down the center. The seam is tight and secure and is full length, retaining what appears to be the majority of its original stitching. The leather scabbard body retains about 70% of its original surface finish, which is quite amazing, considering it is well over 250 years old. The loss is due to crazing, cracking and rubbing from actual use and age. The scabbard is amazingly sturdy, but should of course be handled very carefully because it is still delicate leather.

Overall this is wonderful “in the black”, completely untouched and uncleaned example of a desirable Dutch Musket Bayonet & Scabbard from the American Colonial era. These bayonets are relatively scarce today and this one would be a great addition to any collection of French & Indian War or Revolutionary War era edged weapons, and would be a fantastic compliment to Colonial Era Low Country military musket.