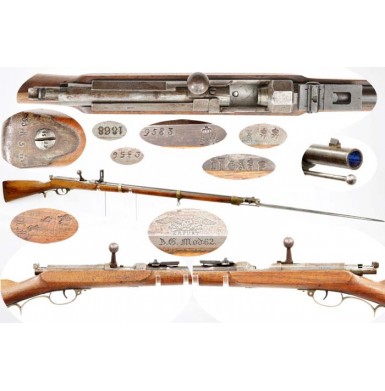 The accompanying Model 1862 Socket Bayonet is in about FINE condition as well. The bayonet fits the rifle perfectly and its patina matches the rifle well. The bayonet has a dull pewter base color with a mottled patina of darker surface oxidation. The blade is mostly smooth with some scattered pinpricking and a few patches of very light pitting, mostly on the underside of the blade. The shank of the bayonet is number 1688, so it is not “matched” to the rifle. The ricasso shows the usual assortment of Prussian inspection marks, all of which are deeply and crisply stamped. The blade is full-length and unaltered. The socket retains its original locking ring, which rotates smoothly and operates exactly as it should.

The rifle and bayonet are a really fine condition example of the arms carried by a front-line Germanic states infantryman during the Franco-Prussian War. The rifle is nicely unit marked on the butt and more history about that unit and its exploits during the Franco-Prussian War can certainly be researcher. The rifle and bayonet are a very attractive pair that display wonderfully together and will be a wonderful addition to any serious collection of Prussian military arms, Franco-Prussian War weapons or even a collection of German military rifles, as the Zündnadelgewehr was the first “modern”, bolt action rifle to see service with German military units. This is a set you will be very proud to own and to add to your collection.