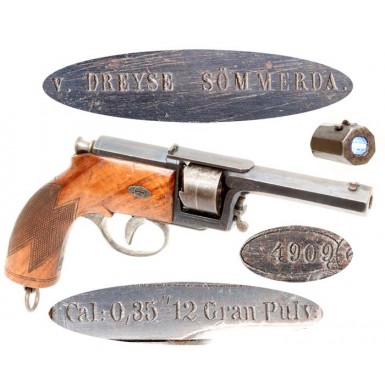 This Dreyse/Kufahl Needle Fire Revolver is in VERY FINE condition. The gun is 100% complete, correct and original, with the exception of the removable loading lever which is not present (and practically never is). The gun is mechanically EXCELLENT and retains its original, full-length and fully functional needle. The revolver is clearly mark on the topstrap: v. DREYSE SŒMMERDA . , indicating that Dreyse produced this revolver at his SŒMMERDA factory after his knighthood in 1864, but prior to his death when Franz added the “F” before the “v” in the barrel mark. The lower left side of the frame is marked with the serial number 4909 and this complete number is found on the rear face of the cylinder, on the needle housing (under the large wooden grip) and inside the backstrap cut out of the grip. The matching mating number 09 (the last two digits of the serial number) is found on the cylinder arbor pin. The lower right side of the frame is marked in a single line:

This indicates that the gun is .35 caliber (measured in Zoll) and the cartridge charge is 12 grains of powder. Measuring the bore with calipers reveals it is about .353” land to land (about 8.98mm) and .376” groove to groove (about 9.57mm), so the gun is nominally the equivalent caliber to a modern “.38” (typically .357”) or 9mm (about .355”-.356”). The 12 grain powder charge seems a little light, but obviously the gun was designed for relatively close work and not long distance shooting. The only other marks on the gun are the Gothic letters Sch which is probably a factory inspection mark or trademark, as the proving of commercial firearms in Prussia was not required during the time these guns were manufactured. The gun is lightly engraved throughout, with simple foliate scrolls present on the frame and rear of the barrel, and front of the triggerguard. The bottom of the triggerguard features simple geometric designs and stars are incorporated into the design on the forward portion of the right side of the frame. The head of the cylinder pin and the grip screw escutcheons have simple floral petals engraved on them and the heads of the grip and triggerguard screws are engraved with simple lines. The revolver is about 11 ““ in overall length with a slightly swamped 4” octagonal barrel that increases from .733” thick at the frame to .783” at the slightly flared muzzle. The rear sight is a simple fixed, notched block on the rear of the topstrap, and the front sight blade is mounted in a dovetail and drift adjustable for windage. The flat butt contains a fixed, non-swiveling iron lanyard ring. The revolver retains about 70%+ of its original blued finish overall, mostly on the barrel and the frame, which probably retain about 80%+ of their blue. These areas shows some thinning and fading of the finish and some loss along the high edges and contact point. The areas where the finish has worn have a mostly dull pewter gray patina. The cylinder retains only about 20%+ original blue, with significant loss to fading and wear, with the balance of the metal having a mostly smooth plum brown patina that blends well with the remnants of the bright blue. The lanyard ring and mount in the base of the grip have a mostly brownish, lightly oxidized patina and the case hardened triggerguard has a smoky gray patina with no obvious case coloring remaining. The face of the muzzle, the wide trigger and the needle mechanism all appear to have been left in the white and were originally polished bright, but have now toned down and have an attractive steel gray patina. The metal of the gun is mostly smooth, with some lightly scattered pinpricking on the frame, mostly around the cylinder mouths. The muzzle shows some minor surface oxidation as does the gripstrap. Some lightly oxidized freckling is also present, scattered over the entire gun and mixed with the remaining original blued finish. The revolver is mechanically excellent, and even though the striker fired, double action only mechanism is not conducive to light trigger pull, the extra wide trigger and well executed lockwork make the trigger pull quite smooth and very comfortable, comparable to very high quality modern revolver. The bore of the revolver is in about VERY GOOD condition. It is mostly bright with crisp, deep rifling its entire length. There is some scattered light pitting along the length of the bore with a couple of more moderate areas of pitting as well. The bore might be improved by a good scrubbing with a bronze brush. The large, one-piece wood grip is in VERY FINE condition as well. The grip is solid, complete and free of any breaks, cracks or repairs. The deep diamond pattern checkering remains very crisp through the entire grip area with only some minor surface wear and slightly dulling to the points of the checkering. The grip retains the large majority of what appears to be its original varnished finish. The grip does show scattered minor bumps, dings and impact marks typical of a 19th century revolver that was actually carried and used during its lifetime, but shows not abuse or real damage.

Overall this is a really fantastic example of a very scarce and very high condition Dreyse/Kufahl Needle Fire Revolver. The gun is 100% original with all matching numbers, is fully functional and retains its original, full-length needle. These guns rarely appear for sale in complete condition, and typically when they are found they either have mismatched serial numbers or the needle is broken (or missing). This gun has none of those problems and still retains the large majority of its original finish, even though it shows clear signs of real period use as well. Based upon recent sales of these revolvers at major US auction houses, similar condition guns with broken needles are selling in the $6,000-$7,000 range, and at least one major US dealer is offering one with mismatched numbers for more than $8,000! This is a very reasonably priced example of a very scarce Dreyse/Kufahl Needle Fire Revolver that was produced sometime between mid-1864 and early 1868, and it would be a wonderful addition to any serious collection of early cartridge revolvers, Dreyse guns, needle guns or 19th century German firearms. The unique profile and nice condition will certainly make it stand out in your collection.