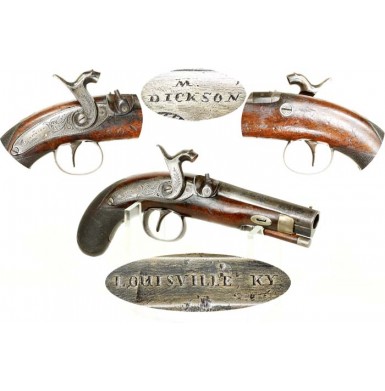 Few handgun designs from the 19th century are more instantly recognizable than the pocket pistols of Henry Deringer. The success of his concealable, single-shot percussion pistols was obvious during the period, exemplified by the large number of contemporary imitators who produced similar handguns and sometimes even marked them with Deringer’s name. More indicative of the success of the design is the fact that Deringer’s name became a permanent part of the American lexicon, with the generic word “derringer” (note that this spelling has a double, rather than single “r”) coming to be a term for any easily concealable pocket pistol. The Deringer pistols came in a variety of sizes from “peanuts’ with barrels shorter than 1”, to medium and large pistols, more akin to the English “overcoat pistols’ of the period. However, all of the designs combined a curved wood grip with a back-action percussion lock and a relatively large bore, typically at least .44 caliber. While hardly target pistols, and certainly full of recoil, these compact powerhouses would certainly have been effective in an up close and personal confrontation.

One of the products offered by the firm, although not specifically mentioned in the ad, were pocket pistols of the “derringer” pattern. To date only a handful of these M DICKSON and LOUISVILLE, KY marked pistols have been located, suggesting the production quantities were rather small, or that the guns saw hard use during the period and few survived. In either case, some estimates regarding extant examples of the Dickson pistols are as low as “fewer than ten known”, although this seems a somewhat unrealistic number. As Louisville was a major transit hub during the mid-19th century, for goods and travelers heading west and returning to the east, the firm of Dickson & Gilmore was well situated to distribute their arms to both of the American coasts.

Offered here is an extremely rare Dickson & Gilmore Percussion Pocket Pistol from their time in Louisville. The gun is clearly marked on the rear portion of the back-action lock: M / DICKSON, and on the top flat of the barrel LOUISVILLE, KY. Were the gun the work of Henry Deringer, it would be classified as a “Medium Pocket Sized” pistol, as it has a 4” long barrel. The barrel is round, with a top flat, and like some other known examples has post-1813 Birmingham commercial proof marks on the bottom. As the firm was an importer of arms and gun parts, it is not strange that they chose to use a readily available commercial English barrel, and likely used a commercially made lock as well, simply stocking and assembling the two most difficult parts of any firearm to make, the lock and barrel, into a completed handgun. The bore of the pistol measures about .48”, and like most of these kinds of pistols is smooth, rather than rifled. Despite the intended use, the pistol does incorporate rudimentary sights, including a fixed notch on the breech and a brass bead near the muzzle. The pistol measures about 8 ““ in overall length and uses a combination iron and German silver mounts. The lock, hammer, triggerguard and breech tang are all lightly engraves with simple feathery foliate scroll motifs. The heads of the screws are also lightly engraved with flower petal motifs. The triggerguard terminates in a pineapple style finial, reminiscent of the designs found on Deringer’s work during the late-1840s through the mid-1850s. The lock and hammer were originally cased hardened, and some traces of dull mottling are still visible, while some faint color is present on the interior of the lock. The lock now had a mostly dully mottled gray patina. The triggerguard was originally blued, and retains some traces of that blue, with a mostly gently oxidized plum-brown patina. The barrel appears to have been blued originally as well, with a casehardened breech. The barrel retains faint traces of color, with a mostly mottled and oxidized patina and scattered areas of pinpricking and light pitting. All of the markings remain crisp and clear, as does most of the engraving. The pistol is fully functional, with the operating crisply and correctly. The bore is moderately oxidized with some light pitting along its length. Both the German silver nose cap and wedge escutcheons have a moderately dull, tarnished appearance. The barrel is secured to the stock by a single wedge and a screw through the breech plug tang. The one-piece walnut stock rates about VERY GOOD as well. The stock is solid and full-length with no breaks or major repairs. A single 1 ““ long diagonal grain crack is present running from the reverse wedge escutcheon up to the barrel channel, and is secured by an old glued repair. The crack is tight and stable and not particularly noticeable. There is also a small chip of wood missing along the upper edge of the lock mortise. Otherwise the stock shows only the usual scattered bumps, dings, handling marks and minor mars typically encountered on a 19th century pocket pistol. The rounded butt is finely checkered and the checkering remains mostly sharp with some minor wear and flattening. An iron tipped wood ramrod that appears to be original to the pistol is secured under the lugged barrel with a single, round iron entry pipe, decorated with baluster turned rings.

Overall, this is a very nice, solid, and complete example of a very scarce Louisville, KY assembled and retailer marked percussion pocket pistol. The gun is certainly of pre-Civil War vintage, as sometime circa 1860-1861 Moses Dickson left Louisville and his partnership with Gilmore and moved to Liberty, MO where he worked until circa 1867. At a recent auction that include one of these scarce pistols, the consignor who specialized in American “derringers’ noted that he was only aware of five examples of Louisville marked Moses Dickson pistols. While this seems on the low side, it is quite clear that these guns are very scarce and very desirable to mid-19th century American pistol collectors. This would be a fine addition to any Civil War era handgun collection, and as the product of a boarder state, this gun may have gone off to war in 1861 as the pocket pistol for either a Yankee or Confederate soldier. It would also be equally at home in a collection of arms and memorabilia that center around the western expansion, the gold rush era or even riverboat gambling. This is one of those guns that were it able to talk, might well have some very interesting stories to tell, as it is from one of the most volatile and interesting periods of American history.