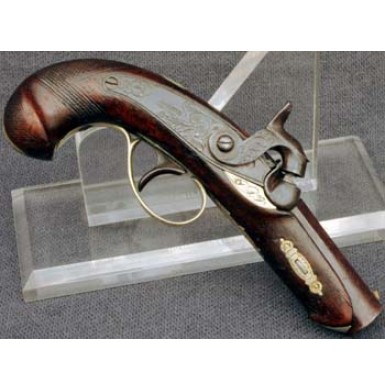 Probably no other single shot percussion pistol is more famous than those of the Philadelphia gun maker Henry Deringer. In fact, he was so successful in creating the archetype of the pocket pistol that his name became a generic term for any small, large caliber hideout pistol and is still used today with that meaning. Among most firearms authors and historians, when speaking of guns actually made by Deringer, the gun name is spelled as the makers. However, when the term is used generically, it is typically written with a lower case “D” and two “R’s” in the word. While we know that Deringer produced his pocket pistols from the late1830’s through 1868, it is about impossible to tell exactly when a particular gun was made since they are not serial numbered. However, through scholarly research, we can come up with a range of production dates based upon various features. The most useful of which is the German Silver trigger guard finial decorations, that have been classified into specific date ranges.

The lovely little Deringer pistol offered here is a very attractive small pocket sized pistol that was likely manufactured between 1848 and 1850, based upon the type of finial on the gun. This places the gun smack in the middle of Gold Rush period manufacture. The gun is in about FINE condition. As is typical of his pistols, the gun is adorned with hand engraved German Silver mountings and inlays. Even the breech is inlaid with a pair of German silver bands. There is an engraved, heart shaped German Silver inlay on the backstrap of the gun that could have been engraved with the owner’s initials, but has been left blank. The gun is about 6 ““ in overall length and has a 2 ““ barrel that measures about .41 caliber. Being a small pocket sized pistol, it is not fitted for a ramrod. A single wedge key and the false breech retain the barrel. The lock is the traditional Deringer back action style. The rear of the lock plate is marked in two lines:DERRINGER / PHILADELa. The same marking is present on the breech between the inlays. The lock plate, hammer and false breech are all lightly scroll engraved as well. The gun features Deringer’s signature checkered bird’s head butt. The case hardened lock and hammer have taken on a deep plumb patina. The iron barrel retains about 50% of the original brown finish, mixed with a brown patina and still retains traces of the copper streaking used to simulate a Damascus barrel look. The bore is in about good condition, and is dark and dirty. It still retains the original 7-groove rifling, which is narrow and deep and quite strong. The breech is clearly marked with the Deringer P within a sunburst mark. The breech tang is mounted with a small rear site and a small brass blade at the end of the barrel serves as the front site. The walnut stock is in about very good condition, with much original varnish present. The wood shows the normal handling bumps and dings and the checkered grip shows some minor wear and smoothing. There is a very small grain crack that extends from the single lock mounting screw to the barrel channel, the result of the screw having been over tightened at some point. The crack follows the edge of the mounting screw escutcheon and terminates on the other side. It is only about ““ long appears to just be a grain crack. It seems to be stable and does not impair the look or displayability of this fine pistol, but is mentioned for exactness.

No collection of Civil War arms is complete with a Deringer pistol by Henry Deringer. Many a young lad went off to war on both sides carrying one of these guns. Also many of the prospectors struck with “gold fever” in 1849 placed one of these guns in their pocket as they headed to California, or purchased one form a Deringer agent once they arrived. Of course it was a Deringer in the hands of John Wilkes Booth that ended the life of Abraham Lincoln as well. It is rare to find a weapon that is so universally recognized by the non-gun collecting world, so well known and is such an icon of firearms history. A Deringer is an essential part of any antique arms collection and one of the few small guns that could be the centerpiece of such a collection.