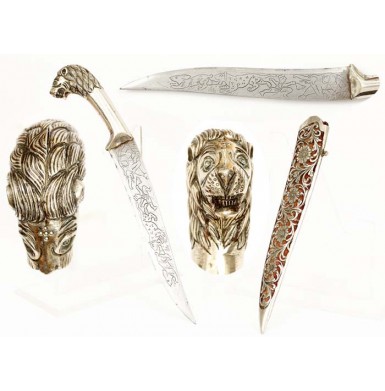 This is lovely example of a late 19th Century Indian Chhuri Didkhami. The dagger takes the classic form of the 19th century Indian knife, with a curved, semi-Yataghan blade that is slightly thickened near the tip, and a curved bag shaped grip with ornamental decoration. The Indian word “chhura” (or “chhora”) simply means “knife” and “chhuri” means “small knife”. The Chhuri Didkhami is a knife with one-and-a-half curves. The 19th century chhuri was an evolution of the Indian Bich Hwa daggers of the 17th and 18th century. This Chhuri Didkhami takes the form that is often referred to as “armor piercing” (see Tirri Islamic Weapons “ From Maghrib to Moghul. This Chhuri Didkhami has a silver plated hilt with a well chiseled lion’s head, most likely a reference to the “British Lion” that ruled India for nearly 100 years (1858-1947), after taking over the administration of India from the British East India Company. In reality, between the British East India Company and Crown rule, the English dominated the Indian subcontinent for nearly 250 years. This knife was likely made as a high quality ornamental knife for ceremonial dress use or for wealthy English citizens (whether visiting India on business, pleasure or in performance of governmental duties) to take home with them to remember their time in Calcutta, Madras or Bombay. The lion head could also be a reference to the Hindu god Nrusimha (called “Narashima”), the man-lion, the fourth stage of sadhana, who no man can kill. Between the British influence and the importance of Hinduism in India, the lion is an incredibly appropriate decoration for the hilt of the dagger. The dagger is about 12” in overall length, with an 8” mild steel blade and a 4” silver-plated hilt. The blade is about 1 1/6” wide at the ricasso, and is crudely engraved with a scene of an elephant changing a man and leopard chasing a hare. The confused scene being played out upon the blade harkens back to the colorful “Just So Stories’ of Rudyard Kipling. The deep blade engraving suggests a "roll engraved" process, similar to that used to engrave the cylinder scene on Colt revolvers. However, the opposing panels have some minor differences, suggesting at least 2 different engraving plates, or possibly that the work was hand done, following a stamped or inked pattern on the blade. The chhuri is accompanied by its original scabbard, which fits the blade perfectly. The scabbard has a wooden liner and is covered in red baize, which has faded over the years to more of a pale salmon color. A decorative metal covering is over the cloth, consisting of silver-plated open work in fluid floral patterns. The chhuri and scabbard are in about EXCELLENT condition, and show little wear or use, but do show real age. This further supports the theory that this was a 19th piece from the era of the Raj, not one of the more recent pieces to come from a Mumbai (formerly Bombay) bazar. The blade is in fine condition with no pitting noted. It has a medium pewter gray color and shows some tiny patches of lightly oxidized age discoloration and darkness. The silver plated hilt retains about 90%+ of its plating, with a slightly cloudy, lightly tarnished appearance. Some yellowish traces of the base metal (likely brass) show where the plating has worn thin. This is primarily in the areas where the knife was handled the most. The scabbard also retains a similar amount of silver plating, and shows only the most minor wear from handling and storage.

Overall this is a really attractive antique ornamental dagger from the time of the Raj in India. It would be a lovely addition to any collection of ethnographic edged weapons, or a collection centered on the British Empire in the late-19th century. No matter what your interest, this is a lovely Chhuri Didkhami in a wonderful state of preservation, with a well chiseled, highly decorative lion’s head pommel that will display wonderfully.