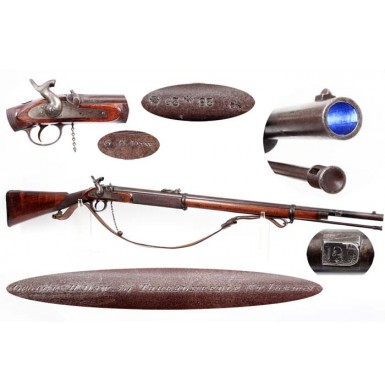 This is a FINE condition example of an English Pattern 1856 Volunteer Short Rifle. Volunteer pattern arms were commercial firearms based upon standard British Military issue pattern arms, intended for sale to British “Volunteers”. Volunteers were the 19th century equivalent of the English militia, with the added attraction of being shooting and social clubs, similar to the para-military Turner Society clubs in America during the same period. Volunteer pattern arms often featured various upgrades to improve them cosmetically and functionally for the competitive shooter. The most common upgrade was a checkered stock and forend, often accompanied by the use of highly figured wood. With the coming of the American Civil War, many of these Volunteer pattern arms were purchased by Confederate agents to help arm the fledgling Confederacy. A number of the 10,000 JS/Anchor marked and inventory numbered “short rifles’ acquired by the Confederacy during 1861 were volunteer pattern arms with checkered stocks, and other enhancements. I recently sold two JS/Anchor marked, checkered volunteer pattern short rifles, which were inventory numbered 2253 and 2846, respectively. Other examples of these enhanced short rifles with Confederate import marks or other Confederate provenance are known as well. Some of these unmarked Volunteer pattern arms were Confederate central government purchases, but the large majority of these guns appear to have been speculative purchases by enterprising blockade-runner owners and captains. Certain English makers are strongly associated with these speculatively purchased, high-grade short rifles, including Thomas Turner, James Kerr, Joseph Whitworth and George Daw. George H. Daw was a London based gunmaker and retailer. Daw was originally a partner with John Sergeant Witton, and they operated as Witton, Daw & Company from 1851-1852 at 82 Old Broad Street. In 1853 they moved to 57 Threadneedle Street and in 1854 became simply Witton & Daw. In 1860 George Daw took over the business and operated as George Henry Daw (also marking arms GH Daw and George H Daw). Daw’s advertisements stated that his firm was established in 1780, suggesting a long family history of gunmaking. Daw remained in business until 1889, and was located at several different London addresses between 1865 and the close of his business. Daw was particularly well known for producing and selling high-grade target and “Volunteer” pattern rifles and rifle muskets. Like many London makers and retailers, Daw apparently relied upon the Birmingham trade to provide him with at least some of his guns, which he would mark with his retailer mark. Some of the arms were also probably engraved, checkered, accurized and in enhanced by Daw or his workmen, to provide the appearance of being higher-grade guns from the well-regarded London maker. At least two Daw marked “sharp shooters’” rifles are known, both with strong Confederate provenance. Both rifles surfaced in the Shelbyville, TN area. During the winter of 1862-1863, the Army of Tennessee wintered in the Tullahoma area of Tennessee, near Shelbyville. It was during this winter that the Army of Tennessee was truly instructed in musketry. General Patrick Cleburne, who had served in the ranks of the British Army, supervised the instruction. Cleburne adopted the British School of Musketry training practices in teaching aimed fire, range estimation, the proper use of sights and the practice of adjusting them for the range estimated. His training was so successful, that some units were designated as “sharpshooters’ at the company and even battalion organizational level. It was during this same winter that a small number of military style, high-grade target rifles were delivered to the Army of Tennessee. The guns were distributed to the finest shots in the army, based upon a number of shooting competitions. Both examples of Daw produced “sniper rifles’ are attic condition guns from the Shelbyville area, apparently untouched since that winter of 1862-63. Additional Daw marked rifles are known to have been sold at auction in Bermuda, after the cessation of hostilities, in an attempt by the land lord who owned the warehouses and offices used by Confederate supply officers, to recover unpaid rent. As a result of these extant examples, Daw marked rifles from the era have a strong association with the Confederacy.

This particular Volunteer Rifle is a lovely Iron Mounted P-1856 Short Rifle retailed by George H Daw. The lock of the rifle is blank, with the exception of the name G H DAW engraved forward of the hammer, near the junction between the lock and the snail (bolster). The top of the barrel is additionally engraved GEORGE H. DAW 57 THREADNEEDLE ST LONDON. The rifle is a crisp example of a “Volunteer” pattern rifle, and is essentially a standard P-1856 short rifle, with the addition of highly figured wood and a finely checkered wrist and forend. The lock has a medium gray patina, with some plum-brown patina and traces of the original mottled case coloring present on the lock and the hammer. The lock functions very crisply on all positions, and is mechanically excellent. The lock interior retains about 70%+ vivid case coloring and is very striking. The interior of the lock is marked BB, and additionally bears the name PRYSE & REDMAN in an arc around the mainspring bolster. A mark in this area indicates the maker of the lock. Pryse & Redman were a major player in the Birmingham arms trade and were member of the Birmingham Small Arms Trade (BSAT) consortium. At least a few examples of Confederate marked and numbered Pryse & Redman P-1853 rifle muskets exist today. The left of the barrel breech is marked with the usual Birmingham commercial proofs, including the provisional proof, the definitive proof, the definitive view and a pair of 25 gauge marks, which indicate the rifle is .577 caliber. The barrel of the rifle is mostly smooth metal and retains strong traces of its original blued finish, mixed with a lovely plum brown patina and some patches of spotty gray discoloration. The metal shows some lightly scattered pinpricking and peppering, most of which is confined to the breech and muzzle area. The bottom of the barrel retains about 80% of its original blued finish, which has been protected by the stock forend. The bottom of the barrel is marked TT, suggesting that the barrel was made by Thomas Turner. There is also an illegible name, the number 224 followed by the initials J.S.. The Pryse & Redman lock and Birmingham made and proved barrel suggest that the entire rifle was made in Birmingham, and that it was enhanced with the stock checkering and engraved with the retailer information in Daw’s shop. The .577 caliber bore of the rifle is in VERY FINE condition. The bore is mostly bright, with excellent 3-groove rifling, and only some lightly scattered patches of pitting along the length of the bore. The original saber bayonet lug is present on the right side of the barrel, near the muzzle. The lug was originally stamped with a mating number to match it with the bayonet that was fit to the gun. This number is now illegible, as the lug has been engraved with the number 137 over the original stamped number. This new mating number is in the style of the engraved inventory numbers found on Confederate imported Enfields, and suggests that the gun may have been mated with an inventory numbered CS imported P-1856 saber bayonet at some point in time. The barrels bands have the same lovely smooth plum-brown patina that covers the majority of the rifle. The upper band is missing its original tension screw-retaining doughnut (not uncommon), but the retaining ring is present on the tension screw of the lower barrel band. The original, full-length ramrod remains in place under the barrel in the ramrod channel. The original rear sling swivel is screwed into the toe of the stock, but the upper swivel appears to be a more recent replacement. An original, 19th century, English Enfield pattern sling is attached to the pair of sling swivels. The sling is bridle leather with a brown finish. It is looped over and secured by a tying thong at the lower swivel, with the upper portion secured by a standing loop that the sling passes through, and a sliding loop that adjusts the length and tension of sling. The gun also retains what appears to be an original, 19th century commercial production cone (nipple) protector. A chain secures it to a small stud, forward of the trigger guard. An original, Enfield pattern rear sight is in the correct position on the barrel, immediately behind the rear barrel band. The sight appears to have been reattached to the barrel and may have been knocked off at one point in time. The original front sight remains in place on the top of the barrel, near the muzzle. The stock of the rifle is in VERY FINE condition. It is made from highly figured walnut and is quite striking. The attractive grain also includes some small knots, and while gorgeous to look at, the stock would have never passed a British military inspection. The stock is skip line checkered at the wrist and forend, and is really very striking. The checkering remains very crisp and sharp, with only the most minor wear and light handling marks. The wood to metal fit of the rifle is excellent throughout. The stock is solid, full-length and complete, with no breaks or repairs noted. The stock does show the usual bumps, dings and handling marks one would expect to find on a 150-year-old military pattern rifle. There is a tiny drying crack along the wood grain, at the rear of the lock mortise, which is barely noticeable. There is also a small chip of wood missing at the top rear of the buttstock, along the buttplate tang. This same area also shows some tiny drying cracks due to the small knots of decorative wood in this area. The only real detraction worth mentioning is the loss of some wood slivers along the edge of the ramrod channel. This is also typical of muzzle loading arms, and simply indicates that the ramrod was drawn from and returned to the channel many times during the service life of the rifle.

Overall, this is simply a wonderful example of a scarce and desirable high grade “Volunteer Pattern” P-1856 short rifle by George Daw. While it is not possible to determine if this rifle was one of the Daw rifles that saw Confederate service, it is certainly a representative example of one of Daw’s fine P-1856s. The gun has a lovely bore, tons of eye appeal, and a very nice condition, original Enfield sling. If you have been looking for a representative example of a Confederate sharpshooters rifle, this would be a nice example for display. You will certainly enjoy adding this fine condition, high grade rifle to your collection, and you might even enjoy shooting it at an N-SSA match, as it has a wonderful bore as well.