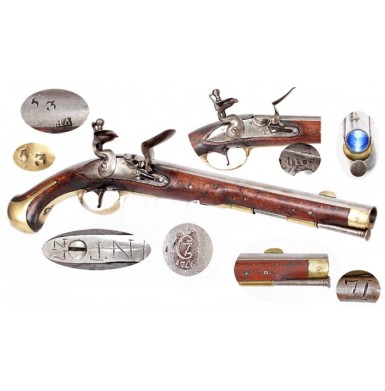 This is a VERY FINE condition example of the Danish M-1772 Flintlock Dragoon Pistol. The Kingdom of Denmark-Norway was one of the smaller players on the world stage during the mid-18th and early 19th century, although their colonial possessions did include colonies in Greenland and Iceland, as well as the Danish West Indies, better known today as the US Virgin Islands; including the islands of St. Thomas, St. Croix and St. John. The Scandinavian kingdom also maintained trading colonies in Tranquebar, India and as well as along the West Coast of Africa; mainly to provide slaves to their sugarcane plantations in the Danish West Indies. During the Napoleonic Wars the kingdom tried to remain neutral, but in 1801 the British attacked the Danish fleet in Copenhagen in 1801, the Kingdom of Denmark-Norway joined with the French and Napoleon to fight the British. With the defeat of Napoleon the Kingdom of Denmark-Norway was forced to put mainland Norway under the control of Sweden, who had been aligned with the British against Napoleon. The M-1772 Flintlock Cavalry Pistol was adopted to replace the earlier M-1751 Flintlock Pistol. Like its predecessor, the M-1772 was a large, single shot, muzzle loading, flintlock holster pistol. The pistol was based upon dragoon pistols in use during the mid-late 18th century by the English and the various German states, with design features drawn from both English and Germanic influences. The pistol had a 13” long, .69” caliber smooth bore barrel, and had an overall length of slightly less than 21”. The barrel had a large brass blade front sight near the muzzle, in the style of Germanic pistols of the era. The large, slightly curved iron lock plate had a slightly convex profile with a pronounced teat at the rear, and was about 5 3/8” in length. The convex, swan-neck cock was not reinforced. The lock had a removable round steel flash pan with a fence. The barrel was secured to the beech stock with a single screw through the breech tang and two iron pins through the stock. The pistols were brass mounted with a brass butt cap, side plate, triggerguard, nose cap and ramrod pipes. The two brass ramrod pipes secured a button head steel ramrod. The markings on the pistols were minimal, usually consisting of the Cypher of King Christian the Seventh on the breech of the barrel and wrist of the stock, scattered touch and maker marks on the barrel and lock, and assembly numbers on the various parts of the pistol. In some cases, the guns were rack numbered or unit marked on the barrel tangs. A total of 10,100 M-1772 pistols were manufactured at the national arsenal in Kronborg, in two production runs. The pistols were manufactured between 1772 and 1779 and again between 1785 and 1789. The only significant differences between the two production series is that the pistols produced between 1772 and 1779 had black painted beech wood stocks, while the later production pistols had the beech stocks stained brown, instead of painted.

This Kingdom of Norway-Denmark M-1772 Dragoon Pistol is in VERY FINE condition. The pistol is one of the later production guns, manufactured between 1785-1789 and has the brown stained beech wood stock. The pistol is 100% complete, correct and original. The breech of the barrel is deeply stamped with the Cypher of King Christian the Seventh, which is a (CROWN) / C7 / 1766. The “C” and the “7” are intertwined and year of Christian’s coronation, 1766 is under the cypher. The lock is marked with a depressed RH, behind the frizzen spring. This is likely the mark of the lock maker. The left barrel breech has a depressed VB proof or inspection mark, and under the barrel the additional marks TR, PB and | | are present. The matching assembly mark 53 is present on the brass butt cap, the side plate and the barrel. The tang of the pistol is engraved with the unit or regimental marking N T / 27 and the ramrod is engraved with the number 71. This is an original and correct M-1772 ramrod, but was apparently numbered to another gun. It is not uncommon for numbered rammers to be found mismatched on 18th and 19th century European military arms. The metal has a lightly cleaned, smooth pewter patina and is very attractive. The metal is mostly smooth, with only some lightly scattered pinpricking and peppering present, along with some patches of lightly freckled, oxidized age discoloration. The smooth .69 bore is quite bright, and remains smooth and crisp, showing only some lightly scattered pitting along its length. The lock functions crisply and correctly on all positions. The frizzen spring is somewhat weak with age and does not really put a sufficient amount of pressure against the toe of the frizzen, but does hold it stiffly enough for the flint to strike sparks from the frizzen. A very old piece of flint is in the hammer jaws, with an old leather cushion. The pistol retains an original, period M-1772 ramrod, numbered to gun #71 instead of this one, which is #27. The rod is full-length and retains threads on the end for the attachment of cleaning implements. The brass furniture has a slightly mellow, medium golden patina, which is very attractive. The original brass blade front sight is in place on the top of the barrel, about 2” from the muzzle. The blade is about 7/8” long at the base and is approximately ““ tall. The beech wood stock rates about FINE and is full-length and complete without any breaks or repairs. The stock does show a pair of cracks, one of which is quite minor and the other is probably the result of a service malfunction. As is common with beech wood stocks, the wood tends to dry and develop minor surface cracks that are non-structural, and follow the grain of the wood. There is one such surface grain crack on the bottom of the pistol, immediately to the rear of the brass throat pipe that directs the ramrod into the stock. The crack is about 1” long and is completely stable and solid. The other crack is about 1 ““ long, and then narrows to a hairline and is located immediately under the cock. It is almost certainly the result of the mainspring breakings and being forced down into the wood under the lock. The hairline follows the wood grain up to the rear of the lock plate near the teat. This type of crack is quite a common occurrence with military flintlocks. The damage is minor and in no way affects the appearance or display of this fine military pistol, which is about 225 years old. These are the only two issues with the stock worth noting. Otherwise, it remains in very nice condition with only the usual bumps and dings from service, use and storage, but nothing significant. The shadow of the royal (CROWN) / C 7 cypher is present on the wrist of the pistol, and is visible if the pistol is held at the right angle.

Overall this is a really wonderful example of a scarce and desirable Napoleonic Era Danish M-1772 Flintlock Cavalry Pistol. This pistol is in a remarkable state of preservation for a military pistol that is around 225 years old. It is all complete, correct, original and period and functions well. The only things that could be improved on the pistol would be a little glue in the crack under the lock and slightly stiffer frizzen spring. The pistol is large, impressive and displays wonderfully. 18th century military dragoon pistols are always difficult to find for sale and are even more difficult to find in such crisp and complete condition. I’m sure that you will be very pleased when you add this to your collection of arms from the Napoleonic Wars, and it will certainly be an impressive addition to any collection of flintlock military pistols.