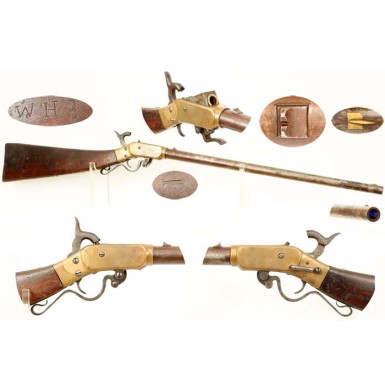 Offered here is a FINE condition example of a very scarce Keen, Walker & Company Tilting Breech Carbine. The gun appears to be 100% complete and correct in every way and has a wonderful look to it. The gun bears the assembly number XXV on the inner surfaces of both the iron and brass frame tangs and in the upper recess of the buttstock. The barrel is full length, measuring 22 ½” to the face of the breechblock and 21 5/8” to the frame juncture. The barrel is marked with the Danville style P on the right hand side, just forward of the frame juncture. The action of the carbine functions smoothly and correctly, with the lever tilting the breechblock upwards when it is lowered and closing it when the lever is closed. The hammer functions crisply and engages both the half and full cock notches firmly and responds to the pull of the trigger, as it should. The original and correct fixed rear sight is in place on the top of the barrel as well as the original dovetailed brass blade front sight. The original iron sling bar is in place on the left side of the frame, but the sling ring is missing. The barrel has a nice, unmolested patina that is a mixture of trace streaks of original brown finish, medium pewter patina and patches of darker oxidized age discoloration. As much as 10%-20% of the original brown may remain, but it is primarily in scattered patches and in the protected areas near the frame. The largest patches of oxidation are near the muzzle and while they have the appearance of crusty surface roughness and scale they are in fact relatively smooth. The barrel shows some lightly scattered pinpricking and scattered peppering along with flecked patches of surface discoloration from oxidation. The bore of the gun rates about GOOD+ overall, and retains strong rifling throughout. The bore shows significant oxidation and moderate pitting along its length, along with some patches of more serious erosion. The lever and lower tang have a deep, dusky bluish patina that is probably the remnants of the original faded finish, either dull blue, oil quenched case coloring or bluing. The iron breechblock appears to retain traces of brown on it, and the original bronze obturation ring is present at the front of the chamber. The hammer retains a dusky mix of bluish finish and brownish patina and has a small chip missing form the forward edge of its lip. The bronze frame has a wonderful, untouched deep ocher patina that shows on indication of having ever been cleaned. The circular side plate has a slightly more yellow tone than the rest of the frame, suggesting the alloy of that piece had a slightly lower copper content than that balance of the frame. As noted above, this is a typical feature of authentic Confederate made bronze/brass made firearms. The frame shows some minor scuffs and impact marks with the minor dents and mars that would be expected on a brass framed cavalry carbine. The buttstock is in about FINE condition and matches the appearance of the balance of the gun perfectly. While the frame to wood fit is not exact and perfect, the wood is clearly numbered to the gun and the slight gapping appears to be the result of “ordinary wood screws”, with their fine threads not appropriate to gun making, having worn in their holes and slightly loosened over time. As noted previously, this same complaint was made about the Bilharz guns as well, and the minor gapping and fit issues 150 years later are why Richmond wanted different screws to be used in the construction of these guns. The buttstock is carved with the period initials W H B on the obverse. It would be nice to try to identify the gun to “WHB” but that would be almost impossible to do accurately. The buttstock is solid and complete and free of any breaks, cracks or repairs. It does, however, show the usual bumps, dings minor rubs and mars typical of a century-and-a-half old military firearm that saw real service in the field.

Overall this is a really wonderful example of a very scarce Confederate made breechloading cavalry carbine. These small production run CS made carbines are always very desirable and rarely appear on the market for sale. With a production of only 282 of the guns, even if 10% survive today (which would be a very high survival rate for a Confederate made gun) that means only 28 of them are out there! Considering that the survival rate of numbered Confederate Enfield rifle muskets is only about 1%, it would be reasonable to assume that even if the average Confederate cavalryman had the forethought to think that this unique carbine was something special and worth preserving, it seems unlikely that more than 5% might exist today. These guns have a wonderful look to them with their brass frames and sleek styling and certainly stand out when hanging on the wall in a display of Confederate arms. If you have been looking to add a really wonderful example of a very scarce Confederate made carbine to your advance Civil War carbine collection, then this would be a great one to acquire. It is a gorgeous example of CS ingenuity and manufacturing capabilities, even when dealing with a lack of machinery and resources. This is a great Confederate made gun that you will extremely glad to add to your collection.