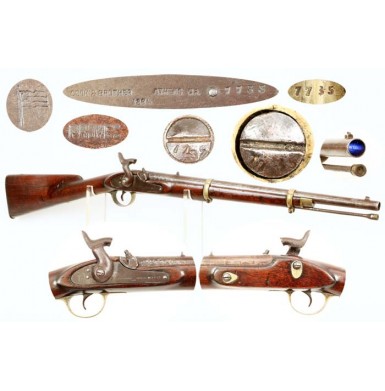 As previously noted the Cook & Brother Cavalry Carbine was based upon the British made Enfield Pattern 1856 Cavalry Carbine. The Cook carbines followed the general profile of the British made guns, and were similar in size, barrel length and caliber. Both had 21” barrels and nominal overall lengths around 37”. The British carbine was .577 caliber (25 bore) and the Cook carbine was nominally .58 caliber. Like the British made carbines, the Cook was rifled with three lands and grooves. The barrels of the Cook & Brother carbines were made from iron bars that were heated and twisted around a steel mandrel, unlike British barrels that were either hammer forged iron or eventually made of cast steel. This twisting process produced a distinct grain pattern, similar to the “Damascus’ steel pattern of fine 19th century shotguns, but without the striking appearance and designs. Some Cook barrels were browned, and those were probably quite attractive with the twisted pattern, while those left in the bright were much less attractive. Like the British carbine the Cook variant included a captive, swivel ramrod and had a sling bar and ring mounted on the flat, opposite the lock. Both guns included brass furniture for the buttplate, triggerguard and nosecap, but unlike the British guns whose barrel bands were iron, the Cook bands were of brass, as were the side nail cups (lock screw escutcheons) and sling ring and bar. The Cook cavalry carbine also included sling swivels on the upper barrel band and in the toe of the carbine’s stock. Another primary difference was that most of the Cook carbines utilized a fixed rear sight rather than adjustable leaf sight. The Cook produced carbines underwent some evolutionary changes from their initial production in New Orleans, through the end of their production in Athens. According to Murphy & Madaus, only two New Orleans made Cook cavalry carbines are known. These guns appear to have been stocked almost to the muzzle as were the English made guns. The guns produced in Athens take on the appearance of scaled down Artillery Carbines, with the stock terminating about 5” from the muzzle. This may well have been a decision to allow shorter pieced of wood to be used for carbine stocks, reserving longer pieces for rifles and muskets. A good supply of properly seasoned wood for gunstocks was a problem that would plague the Confederacy for most of the war. The New Orleans made carbines also have different lock and barrel markings than that later Athens production guns, with a different style of flag stamped to the rear of the hammer and New Orleans rather than Athens as their production location. The prototypical Athens produced carbine is quite similar to the New Orleans produced guns, but with the shorter stock as noted, and a new lock marking that read: COOK & BROTHER ATHENS GA (Serial Number) over the date 1863 or 1864. The Confederate First National Flag stamped at the rear of the lock plate is slightly different on the Athens made guns as well. The barrels were typically marked in three lines COOK & BROTHER / ATHENS GA / (Date) and with the serial number of the carbine. The serial numbers appeared on the majority of the carbines components, such as the nose cap, under the triggerguard, on the rear surface of the barrel bands, and on the head of the lock and tang screws. The guns produced in New Orleans had a two-piece triggerguard that was similar to US made arms of the era and different from the Enfield pattern guns. The Athens made guns had a one-piece triggerguard much more closely patterned after the English ones. The bottoms of the barrels and the breech plugs were both stamped with matching alphanumeric mating marks. Early Athens carbines also had alphanumeric mating marks inside the locks, although these generally had no relationship to those found under the barrel. Some Cook carbines bear the “FWC” cartouche of Ferdinand Cook, but these are quite rare and the mark is rarely visible either due to wear of not having been stamped in the first place. As the production of Cook carbines continued in Athens, additional changes were made, both to save time and money and quite possibly due to practicality. The sling bar and ring was eliminated from the brass lock screw escutcheons, and this may have been a practical change, as the brass bar was not likely to hold up for long in the field. Its elimination also conserved brass. The swivels for the ramrod were also eliminated, and again this was probably both practical and for conservation. As early as the fall of 1862 Confederate cavalry General J.E.B. Stuart had complained about the awkwardness of the P-1856 Enfield Cavalry Carbine’s swivel ramrod, noting that he and his men preferred the regular ramrod of the artillery carbine. Many extant examples of Confederate marked P-1856 carbines are found without their iron rod swivels, which were either removed intentionally in the field or broke during use. The Cook carbine’s brass swivels were quite probably too weak to survive significant use, and again their elimination was both practical and a saving of precious brass. It appears that the regular sling swivels were also eliminated on the last of the Cook carbines, saving time, materials and some cost. The later Athens production Cook carbines also show fewer markings than the earlier ones, with the barrel marking eliminated in some cases, along with the serial number from some parts and mating marks inside the locks. Essentially as the war progressed and things became more dire for the Confederacy, the Cook carbines became simpler and more stripped down versions of their original New Orleans incarnation.

Overall this is really very nice, essentially complete and original example of a scarce and desirable Cook & Brother Cavalry Carbine. The research by Murphy & Madaus places the overall production of Cook & Brother long arms around 7,000 (maybe as many as 8,000 based on serial extant numbers), the majority of which were rifles and the unknown balance of which were the cavalry carbines and artillery musketoons. These guns do not appear on the market very often and they are usually prized possessions in Civil War carbine collections and in Confederate long arm collections. This was one of the very last of the guns made by Cook & Brother, and deserves a special place in an advanced collection of Civil War arms.
Provenance: Damon Mills, Bob King Collection, J. Faught Collection of southern carbines & musketoons.