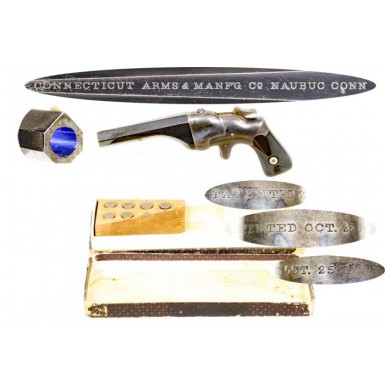 Sometime in late 1865 or early 1866 they introduced a single shot cartridge pistol design based upon their pivoting breech patent. The pistol also included their patented extractor (#54,147 – issued April 24, 1866) and a patented sight (#61,007 – issued January 8, 1867). The standard production model was produced with a 4” octagon to heptagon barrel, where the top flat tapered to a point at the muzzle, leaving only seven instead of eight sides to the barrel at that point. The pistol was chambered for a .44 rimfire cartridge similar to the .44 Henry Flat, but shorter. The barrels were brightly blued, and the receivers were case hardened in mottled colors. The grips were typically checkered gutta-percha, although some were made with checkered wood grips as well. Standard markings were a one-line manufacturing address on the top barrel flat and patent marking around the pivoting breechblock referring to the October 1864 patent. The single action pistol was operated by cocking the hammer and then pressing down on a checkered button on the top of the breechblock. This allowed the block to be rotated to the right, revealing the chamber. After the cartridge was loaded, the breechblock was rotated back to its upright position and the pistol was now ready to fire. A slot in the top of the breechblock release button served as a rear sight and a small German silver blade served as the front sight. After firing, the action could be opened in the same fashion and the patented extractor would pull the casing partially out of the chamber, allowing the user to remove it the rest of the way with their fingers. Over the years, the guns have received the collector nickname Hammond “Bull Dog” but it is not clear if that was a period appellation. Some few examples are known with the name “Bull Dozer” on the side of the barrel. While nearly all of the Connecticut Arms & Manufacturing Company pistols were of the pattern described above, a handful were made in other calibers and different barrel lengths, including .22RF, .32RF and .50RF with barrels as long as 12” on the “target model”. Some of the guns were also produced with detachable, skeletonized metal stocks, allowing the pistols to be transformed into ersatz rifles. While the total production numbers for the guns are not known, most references place total production at somewhat around 7,400 guns, and certainly less than 8,000 pistols, before the company failed in 1868. Apparently enough of the guns were produced during the brief time that they were manufactured that they were still being offered for sale as “new old stock” well into the 1880s.

Offered here is a NEAR EXCELLENT example of a Connecticut Arms & Manufacturing Company Single Shot Derringer – aka “Hammond Bull Dog”. The gun is contained in its original two-piece, pasteboard retail box and is complete with the original angled wood cartridge block that holds six period cartridges. The top flat of the barrel is clearly marked in a single line: CONNECTICUT ARMS & MANFG CO NAUBUC CONN. The top, front edge of the breechblock is marked in single line: PATENTED OCT. 25. 1864. This mark is quite clear as well, although the last two digits in the year mark are weak. The pistol bears no additional marks but is serial numbered 3715 on the grip frame, under left grip. The barrel of the pistol retains about 90%+ bright blue, with some minor high edge wear and some loss dues to some flecks of surface oxidation. The barrel is nearly all smooth, other than some tiny patches of minor oxidized surface roughness on the right side, near the receiver. The receiver retains about 85%+ vivid case coloring, with some fading and dulling and the balance of the frame with a smoky blue-gray patina. The hammer retains about 65%+ case coloring, with most of the loss due to fading and dulling. The hammer spur and trigger face are both checkered, as is the action release button on the top of the breechblock and in all cases the checkering remains quite crisp. The pistol is mechanically functional and the breechblock’s pivoting and locking mechanisms both work appropriately. The bore is in about NEAR EXCELLENT condition as well and remains nearly all bright with crisp rifling. Only some frosting in the grooves along with some lightly scattered flecks of oxidation keep the bore from being like new. The two-piece checkered gutta-percha grips are in a NEAR EXCELLENTas well. They are solid and complete with no breaks, cracks or chips and retain crisp checkering. The pistol is accompanied by its original two-piece, two-tone pasteboard box. The box remains in about GOOD+ condition and is solid with scattered wear, finish loss and discoloration. The box shows worn and weakened corners but remains complete. The original triangular wood cartridge block is present in the box but is no longer secured to the corner, with some old glue residue on both the bottom of the box and the bottom of the wood block. The block contains six unfired .44RF period cartridges, three with no headstamps and three with US headstamps. The unmarked cartridges are nominally .44 caliber with overall lengths of nominally 1.15”. The “US” marked cartridges are the same caliber and have overall lengths of nominally 1.25”. All of the cartridges show good age, a thick white patina on the bullets and an uncleaned bronze patina on the cases.

Overall this is a really exceptional example of a Connecticut Arms & Manufacturing Company Single Shot Derringer, better known as the “Hammond Bull Dog”. The gun is in wonderful condition and retains its rare original pasteboard box with the original wooden cartridge block and six period cartridges. These pistols don’t often appear in this condition, especially with their original box. This would be a wonderful addition to any collection of single shot pistols and derringers from the period of the old west.