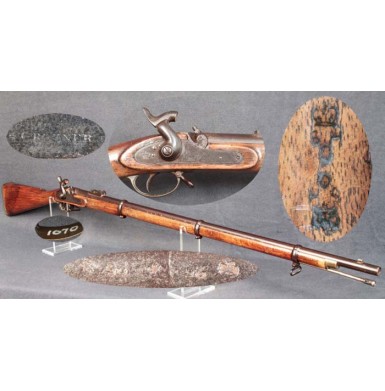 This very attractive Sinclair, Hamilton & Company supplied P-1853 Enfield Rifle Musket was produced by the famous English gunmaker W.W. Greener. Greener was one of the rare Birmingham based gun makers who put his name on the lock plates of his rifles and rifle muskets, like the London makers did. Typically Birmingham produces arms were simply marked “Tower”. William Wellington Greener was born in 1834 and lived until 1921. He was the son of London gunmaker William Greener, who had learned the trade as an apprentice to the very famous London gunmaker John Manton. The younger Greener learned the gun trade from his father. He established his own business in 1855. W.W. Greener initially worked in Birmingham and was located at Lench Street (1858-1863) and at Loveday Street, St Mary’s Works (1863-84) during the Civil War years. After the death of his father in 1869, Greener took over his father’s London operations as well, and operated both Birmingham & London works well into the 20th Century. During the late 19th century Greener developed a reputation for building some of the best shotguns in England (if not the world), and received numerous British patents for arms innovations. In 1881 Greener authored one of the most authoritative works on the history and development of “modern” firearms with his magnum opus The Gun & Its Development, an 800+ page tome that was in its 9th edition by 1910. A copy of this classic work is included in my extensive arms library.

Greener marked Enfields with Civil War association, markings or provenance are not commonly encountered today, but clearly a number of his guns were imported by the Confederacy. I am not aware of any Civil War associated Greener that is not Sinclair, Hamilton & Company marked. When encountered, the Greener arms are typically high grade “Volunteer” style Pattern 1860 “short rifles”. Only a couple of Greener marked P-1853 “long Enfields’ are known to exist today, although they were numerous enough for Confederate Lt. J Wilcox Brown to note in a June 1, 1863 letter, after a visit to the Richmond Arsenal, that:

“The .577 Rifle Muskets examined were of the Enfield pattern, marked Tower, Windsor, Bond, Carr, Barnett & Greener that had been repaired at the Artillery Workshop in Richmond and were ready for issue.”

It would appear from the conspicuous absence of such well known Confederate arms suppliers as Parker, Field & Son and R.T. Pritchett from the above list (arms that are much more frequently encountered today than those by Greener), that a significant number of Greener’s guns did make it to the Confederacy, but apparently failed to survive to appear on today’s collector market.

The Greener marked P-1853 Enfield Rifle Musket here is in VERY GOOD to VERY GOOD+ Attic condition. The lock of the gun is clearly marked GREENER in a single horizontal line, forward of the hammer with the typical British (CROWN) to the rear of the hammer. The lock plate has the usual Birmingham style “double line” boarder engraving and the “feathered” hammer. The lock has a mottled gray-brown patina, which retains some hints of fade case coloring. The lock has some scattered areas of lightly oxidized roughness on its surface. The lock is mechanically excellent and functions perfectly on all positions. The barrel of the gun, and its iron bands, have a thick, untouched chocolate brown patina. The metal is mostly smooth forward of the rear sight, but to the rear of the sight it shows light to moderate pitting, especially around the breech and bolster area. This is the result of the caustic flash of the mercuric percussion caps of the era. The barrel is marked at the breech with the typical Birmingham commercial Proof, View, and Definitive Proof marks, which are separated by a pair of 25 gauge marks, indicating the gun is .577 caliber. As would be expected, the gun is devoid of any British military or government markings. The bottom of the barrel is marked with an illegible makers mark, a pair of opposed G marks (one is upside down) and with the initials J.A.. The bore of the gun rates about FAIR. It is dark and dirty with no discernable rifling and moderate pitting along its entire length. A good scrubbing may reveal the progressive depth rifling is merely concealed under 150 years of accumulated dirt and oxidation, but I make no promises to that effect. The barrel band tension screws all retain their original round screw protectors, which keep the screws from being removed from the bands and getting lost in the field. Both original sling swivels are in place as well. The original long-range rear sight is in place forward of the breech and the original dual function front sight / bayonet lug is in place near the muzzle. An original, period Enfield pattern ramrod is in place in the channel under the barrel. The brass furniture has a lovely mellow bronze patina and an old museum or collection inventory number, 1070 is painted in white inside the triggerguard. The stock of the gun rates about VERY GOOD to VERY GOOD+ as well. It is solid, full-length and free from any breaks or repairs. The stock shows a pair of opposed (one is inverted) (CROWN) / SH / C marks behind the triggerguard, indicating that the gun was delivered to the Confederacy by Sinclair, Hamilton & Company. The wood to metal fit of the stock is excellent throughout, as one would expect from a high quality gunmaker like Greener. The stock does show a significant number of handling bumps, dings and impact marks from handling and use in the field. There is also a small amount of wood burnout behind the bolster, which would be expected based upon the flash pitting around the breech and bolster area. All of this wear is completely consistent with a military long arm that served in the field 150 years ago. There is also a very tiny (less than 1”) grain stress crack running from the rear lock screw to the barrel channel. This is very common on muskets and it the result of the screw being over tightened. The stock has a lovely lighter, honey toned color to it, which is quite attractive. The wood does appear to have some traces of an old coat of varnish or shellac, a common method of preserving antique guns in the 1950’s. The remnants of the finish do not detract from the display of the gun and are mentioned for exactness. The old finish probably helped the gun to survive in such good and complete condition over the years.

Overall this is a really attractive, and unmolested example of a Confederate imported P-1853 Enfield from a rarely encountered English maker. Greener arms are highly desirable and collectible in and of themselves and he is rightfully one of the most famous 19th century English arms makers. Confederate marked Greener’s are particularly scarce and this would be a great addition to any collection of Confederate import arms, or to an advance Enfield collection that seeks to add as many makers and furnishers to collection as possible.