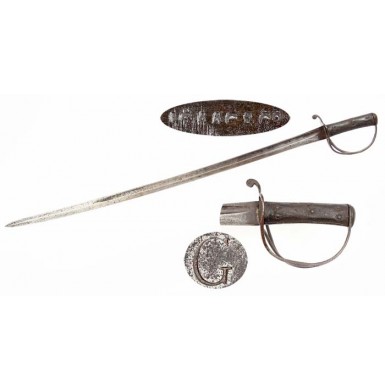 Offered here is a very rare, Confederate Imported British Pattern 1853 Cavalry Saber with the very desirable and scarce Georgia “G” mark. The saber is in about GOOD+ to NEAR VERY GOOD condition, and has a nice, dark, mostly unmolested patina. The spine of the saber is marked ISAAC & Co and the reverse ricasso is marked with a G that is about .3” tall. The blade is nominally full length, measuring 34 “, and has a dull pewter color with a darker patina of mottled gray and oxidized dark metal over the base color. The sword was probably cleaned a very long time ago (possibly more than a century ago) and has aged and toned down to its present appearance. The blade is mostly smooth, with scattered light pitting along its length that becomes more evident (and more moderate) closer to the tip. The last half of the blade, closest to the end, shows the most aggressive wear, oxidation and pitting. The edge of the saber has been very lightly sharpened, and is free of any serious nicks or gouges. The iron guard shows even light pitting over its entire surface with a dark gray, almost black patina. The laminated leather grip panels rate about VERY GOOD and retain some of their original finish and roll embossed checkering. Much of the grip surface has flaked and worn smooth, but the checkering is still evident and the grips are solid with only slight shrinkage and no major warping. The grips remain solidly attached to the saber hilt. There is no scabbard present.

Overall this is a very good, unmolested, 100% original and correct example of a scarce Confederate Imported British Pattern 1853 Cavalry Saber. The sword bears the desirable ISAAC & Co mark on the spine and scarce Georgia “G” mark on the ricasso. This would be a solid addition to any Confederate sword collection, as well as any collection of Confederate import arms, especially those marked with the elusive Georgia “G”.