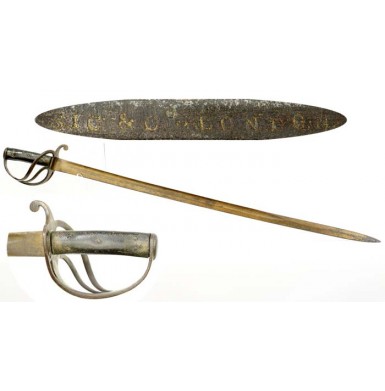 Offered here is a very rare, Confederate Imported British Pattern 1853 Cavalry Saber with the very desirable and scarce SIC & Co LONDON mark. As would be expected, the mark is applied with individual dies, just in front of the quillon on the spine of the saber. The saber is in about VERY GOOD condition, and has a nice, dark, mostly unmolested patina as well as most of a period applied coating of gold paint from the time the saber spent on display in a G.A.R. hall. This saber was part of the collection of the General S.K. Zook Grand Army of the Republic (G.A.R.) Post #11 in Norristown, PA. During the 1950s the collection of the post was sold with noted antique militaria dealer George Gorman acquiring most of the post’s memorabilia. The sword was subsequently acquired circa 1966 by R.A. “Russ’ Pritchard Jr., author of the noted book on Confederate import arms from Great Britain, The English Connection. Mr. Pritchard later sold the sword to co-author C.A. “Corky” Huey, who some years later sold it back to Mr. Pritchard. For the last forty years this saber has been in one of the two finest and most notable collections of Confederate imported English arms.

As previously noted the spine of the saber is marked SIC & Co LONDON in individually stamped letters. A picture of this same pattern of marking is shown on page 295 of The English Connection. The blade is nominally full-length, measuring 34 5/8”, and has a dull brownish-gray mottled patina with patches of more darkly oxidized metal over the base color. The sword also retains the large majority of the gold G.A.R. display paint on the blade, with only some traces of this paint on the hilt and grip. The blade is partly smooth, with scattered light pitting along its length that becomes more evident (and more moderate) closer in the fuller groove of the blade. There is also some lightly scattered surface roughness present, mostly under the gold paint. The iron guard shows even light pitting over its entire surface with a darker patina, more brown than gray, than found on the blade. The condition of the metal suggests that this saber may have been an early battlefield pick up or barn find which was subsequently added to the collection of the Zook post and then painted. Many of the Zook post artifacts had specific provenance to either Sharpsburg (Antietam) of Gettysburg, so it is reasonable to assume that this saber may have a similar association. The laminated leather grip panels rate about VERY GOOD and retain much of their original finish and roll embossed checkering. Some of the grip surface has flaked and worn smooth, but the checkering is still quite evident and the grips are solid with only slight shrinkage and some minor warping. The grip panels show only one significant condition issue, a period gash in the right grip panel that is quite evident but remains tight and secure. The grips remain solidly attached to the saber hilt. Some of the old gold paint is still present in the recesses of the grip checkering. There is no scabbard present with the sword.

Overall this is a very good, unmolested, 100% original and correct example of a scarce Confederate Imported British Pattern 1853 Cavalry Saber. The sword bears the desirable, early SIC & Co LONDON mark on the spine and comes with great provenance from a wonderful Pennsylvania G.A.R. post collection, as well as from the two most recognized collections of Confederate imported English arms. This would be a solid addition to any Confederate sword collection, as well as any collection of Confederate import arms. For those who love old museum and G.A.R. collection items, this is a real gem. Upon request, a letter of provenance will be provided with the sword from Mr. Pritchard.