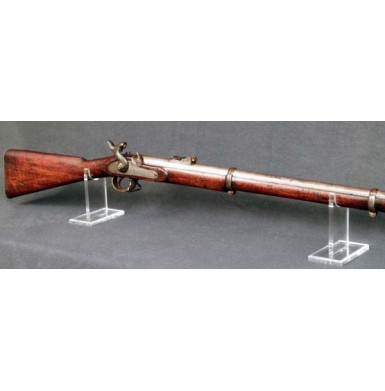 This is simply one of the rarest Confederate use Civil War weapons I have ever had the pleasure to offer for sale. For collectors of Confederate marked & imported Enfield rifle muskets, the examples marked for specific Confederate state purchases are the most sought after and highly prized. The classic Georgia “G” and South Carolina “SC” marked weapons demand high premiums and are often the centerpieces of advanced Enfield collections. The most desirable and the scarcest of all the state markings is that of the state of North Carolina. Current research indicates that only five examples are known: one in the Dr. John Murphy Collection at the Greensboro Historical Society, three in privates hands, and the fifth example is being proudly offered for sale right here.

This wonderful example of a North Carolina marked, Confederate purchased P-1853 Type III Enfield Rifle Musket, conforms to all other known examples. All are made by London makers (4 of 5 are definitely by Barnett, while the 5th has a London proved barrel but appears to have a replacement lock) and all are marked with the CH / 1 Confederate inspection mark, in a small circle on the top of the comb of the stock, forward of the buttplate tang. The mark has long been called the Caleb Huse mark, referencing the primary Confederate purchasing agent in Great Britain, and in some respects it is his mark. However, the initials really refer to arms viewers (inspectors) Curtis & Hughes who were hired by S. Isaac Campbell & Company to inspect arms that had been purchased for the Confederacy. We know that Isaac Curtis inspected at least some of the P-1851 "Minie” Rifles procured by the Confederacy from SIC & Co, as a certificate attesting to his inspection of 75 of these guns (dated Sept 26, 1861) is contained within the McRae Papers. Pattern 1851 Mini” Rifles with Confederate provenance are known with the CH / 1 mark. Similarly, an invoice was sent to John Edward Barnett & Sons on May 26, 1862 for the sum of “46.17s.2d to pay for the viewing services of “Curtis & Hughes’ who had inspected guns delivered by Barnett. The North Carolina marked guns are unique, in that the state mark is engraved on the breech of the barrel, while most other state marks (most notably those of Georgia & South Carolina) are found stamped into the wood of the stock. The states initials N.C. are boldly stamped in block, serif letters on the flat on top of the breech. The North Carolina purchasing agent James L Peyton is credited with acquiring the guns in England. 2000 of the guns were delivered to Wilmington, NC in April of 1862, by the blockade runner Nashville. While other North Carolina Enfields were certainly procured and delivered during the course of the war, this initial cargo may have been the only one with the guns so marked. If these 2000 guns were the only ones marked NC, that places the survival rate of these arms at about “ of 1%, making it unlikely that many more NC marked guns were delivered. If they had been, the guns would be encountered more often than they are.

The North Carolina marked Enfield Rifle Musket offered here is in about VERY GOOD+ condition. The gun is 100% complete, correct and original in every respect. Like 4 of the 5 known examples, the lockplate is clearly marked forward of the hammer BARNETT / LONDON. This is the mark of John Edward Barnett & Sons who were the oldest and most prominent of the London gunmaking companies. They could trace their history to 1628, and in 1637 King Charles I appointed a Barnett the first president of the gunmakers guild. The company continued in business until just before World War I. While it is impossible to know for sure, surviving documents seem to indicate that all of Barnett’s production of Enfield pattern arms during the first 2-3 years of the war (that were not contracted for by the British Government) went to fill Confederate arms contracts from SIC & CO, and the various Confederate States. There is no crown mark to the rear of the hammer, and the lock plate shows the double line engraving typical of one produced on contract in Birmingham or The Regions. The barrel is marked with standard London commercial proof and view marks. The top of the breech is clearly and crisply marked N.C.. The comb of the stock is faintly marked with the CH / 1 mark in a circle, just in front of the buttplate tang. The ramrod is marked with the initials T&CG for Thomas & Charles Gilbert of Birmingham. A “small work” maker who produced many ramrods and small gun parts for Birmingham and London makers from the 1850’s until they went out of business sometime between the last part of 1862 and the beginning of 1863. The interior of the lock is marked by famed Wolverhampton, Staffordshire gun & gunlock maker Joseph Brazier, with a simple J BRAZIER around the mainspring boss, and the name BARNETT is stamped above the mainspring. The backside of the hammer is maker marked S.P.. The lock is mechanically excellent and functions crisply and correctly on all positions. The bottom of the barrel is also stamped BARNETT, as well as being marked with the chisel cut assembly mark \ | /. This same assembly mark is present on the top edge of the lockplate, in the stock and on the necks of the screws. The gun has a mostly smooth, pewter patina, with scattered patches of light to moderate age staining and minor oxidation. There are a few patches of minor peppering and pinpricking present on the barrel, but no significant pitting or roughness. The bore of the musket rates about GOOD+ with strong rifling, and scattered light pitting along the entire length of the bore, with the worst pitting in the last two inches near the muzzle. The case hardened lock plate has "silvered out", but the hammer still retains traces of its original case coloring, mixed with a smoky gray patina. The gun retains both of the original sling swivels, as well as the original long-range rear site. As previously noted, the original maker marked ramrod is present in the channel under the barrel. It is full length and retains good threads on the end of the rod. The brass furniture has a medium mustard patina and is quite attractive. The stock is in VERY GOOD+ condition, and is solid, complete and free of repairs. The stock shows a significant number of bumps, dings, nicks and even some minor gouges “ all indications of significant use in the field, but no indication of any abuse. The stock is marked with a number of carved letters and initials; a feature often encountered on Confederate used arms. The letters CG are nicely carved into right side of the butt stock, and the letter A is carved into the left side of the butt with the same hand. This may well indicate that “CG” of Company “A” carried this gun at one point in time. On the flat opposite the lock the letter L is carved, followed by the initials E B S - all in the same style font. Likely indicating that “E.B.S.” of Company “L” carried the gun during the war. Since we can be almost certain that the gun was issued to a North Carolina infantry regiment, and since only a handful of those regiments were large enough to have a Company L, some diligent research may well reveal who “EBS’ was.

All in all this is simply a great looking example of a truly scarce and wonderful Confederate purchased and North Carolina marked Enfield rifle musket. The gun is complete and correct in every way, and has fine markings throughout. The initials in the stock make the gun even more appealing and definitely add to the Confederate mystique that a gun like this has. The face that the initials on the stock flat may lead to an actual ID for the soldier that carried the gun is even more intriguing. This is a gun that will most certainly become the focal point of a truly advanced CS Enfield collection, and is one that I will truly hate to part with.