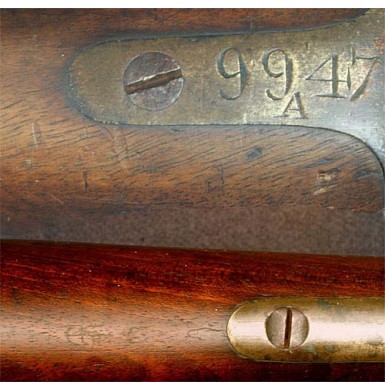 Next to a Richmond rifle musket, no single long arm has the cache and instant recognition as a true Confederate weapon as a British P-1853 Enfield, marked with the enigmatic J S / Anchor mark combined with an engraved, numbered buttplate. If a collector were to have only one true Confederate weapon in their collection, one of these imported Confederate Enfield’s would be the perfect addition. During the early days of the American Civil War, Confederate purchasing agents (primarily Caleb Huse) did a splendid job of tying up contracts for the British P-1853 Enfield Rifle Musket, truly one of the most advanced and well made long arms of the time. Many of the early purchases were marked to help account for deliveries and to make sure that the contractors were paid for what they delivered. Marks such as JS / Anchor, CH / 1 and SH / C and it variants all indicated Confederate purchases and helped to properly account for them. The first CS importation mark to be correctly identified by collectors is the famous JS / Anchor mark. While some level of debate still continues regarding who JS was, we do know that these guns were the most inventory controlled pieces, as all but the very last purchases so marked were engraved with a number in their brass buttplate, or stamped with one in the wood behind the trigger guard in the case of iron mounted rifles. The numbering system on the buttplates apparently started with 0001 and proceeded to 9999, at which point a letter suffix was added so the numbers could be used again. Thus the second ground of 10,000 muskets were numbered #### / A, the next 10,000 as #### / B, etc. This numbering system allows us to make some educated guesses about when a particular gun may have left England bound for the Confederate coast. Unfortunately, due to the fact that most of the guns were delivered to trans-shipment ports like Bermuda, prior to being loaded on a blockade runner for final delivery to the Confederacy, it is hard to know how long a particular gun may have sat on a dock or in a warehouse, prior to delivery.

The P-185 3 Enfield Rifle Musket offered here is a classic example of a Confederate marked and imported musket that clearly saw extensive use in the field and fired many shots against Federal troops. The gun is marked in the wood behind the trigger guard with the classic J S / ANCHOR mark, and the buttplate tang is engraved with the inventory number 9947 / A, indicating that it was in the second group of 10,000 muskets so marked. The gun is a typical Birmingham contractor produced musket for export, and is marked in the toe of the stock with the master contractor name SWINBURN. The firm was established by Charles Phillips Swinburn in 1834 and operated as such until 1850, when it became Swinburn & Son, operating under the leadership of Charles’s son John Field Swinburn until 1883. The Swinburn family was a well established Birmingham gun making family and in 1841 advertised as C.P. SWINBURN (Successor to J. Field), GUN & PISTOL MAKER to Her Majesty’s Honourable Board of Ordnance”.NO 17 Russell Street, Birmingham. John Swinburn worked closely with the famous Birmingham gunmaker (and later BSAT President) Thomas Turner, and they even shared some patents together for improvements to guns. The gun has the typical Birmingham style lock markings, a simple double line engraved lock with a Crown to the rear of the hammer and 1862 / TOWER forward of the hammer. The gun also has a unique feature that is occasionally found on early CS marked and imported P-1853’s. It has a 40” barrel, with a long, octagon breech section. These barrels are normally found with the standard Birmingham view, proof and gauge marks, and are additionally marked with a C within a Diamond, thus giving them the collector name Diamond “ C barrels. There is still much speculation and argument about the source of these barrels, and for many years it was believed that they were Colt barrels contracted for in England and then either not delivered or rejected. There is some indication that the McRae papers may actually shed some light on this controversy and if the Enfield book in the works by Russ Pritchard & Corky Huey ever reaches print, this mystery may be solved. One thing that is certain is that these barrels usually show up on early dated guns (1861 or 1862) and are often accompanied by CS importation marks and even CS state marks. A wonderful example from the George Wray collection is on display at the Atlanta History Center, which has this same type of barrel and a large SC mark in the stock, along with the JS / Anchor and numbered buttplate. The gun also has a BSAT or Birmingham Small Arms Trade trademark stamped on the rear site.

Overall in the gun is in about NRA GOOD + to VERY GOOD condition, and for a Confederate used and carried musket is in Very Good shape. The gun clearly shows years of hard use in Confederate service, but also shows that arms were well cared for and not abused. The guns shows significant pitting in the breech and bolster area from firing hundreds, if not thousands of rounds during the course of the war, and the wood immediately behind the bolster shows significant burn out that matches the metal perfectly. The balance of the metal, from the rear site forward, is mostly smooth and shows only light scattered peppering, pinpricking and minor roughness “ all indicators that the gun was well cared for and cleaned while in service. The iron barrel and furniture show a wonderful deep chocolate patina that is untouched. The bore of the musket is in about poor condition and is very dark and dirty. While rifling is still visible and the bore might clean up some, I would rate it about a “sewer pipe” in its present condition. The bore condition exactly matches the exterior indications of wear and use. The action of the gun works perfectly and is still quite crisp despite the obvious hard use the musket has seen. The brass hardware has a deep mustard color to it that matches the iron well. In typical Confederate fashion, both sling swivels are missing from the gun. However the rear site is present and the screw keepers for the middle and bottom band are present as well “ all items that are typically missing from Confederate Enfield’s. The original ramrod is missing and is replaced by a crude period button head rod that is a few inches short of full length. Missing and replaced ramrods are quite common on CS used muskets as well. One odd item that is missing is the barrel tang screw. While it would be simple to replace this with an original screw for about $10, I felt it was more appropriate to maintain the integrity of the gun the way I found it. The stock is in about Very Good condition with no breaks or repairs and shows only the years of bumps and dings from field use during the war “ all of which only add character to this grizzled old veteran. As is so often the case on Confederate guns, there are a set of initials on the flat opposite the lock. A former owner has carved the letters R C C in the flat - a set of initials that may be worth researching. The gun came out of a South Carolina estate, if that helps narrow it down any....

This is simply a wonderful example of a real Confederate imported and used Enfield Rifle Musket. The gun has the most desirable and well known of Confederate import marks and was clearly an early arrival that was likely on the field by the middle of 1862. The condition clearly displays that this gun saw service and fought hard for Southern independence during the remainder of the war. This was not a gun that went home as a war trophy during the early days, or that was captured on a blockade-runner and later sold as surplus. This gun fought the war. If you have ever wanted a completely honest CS musket that really saw service, this would be a great addition to you collection and for a reasonable price considering all of the history that this gun was a witness to.