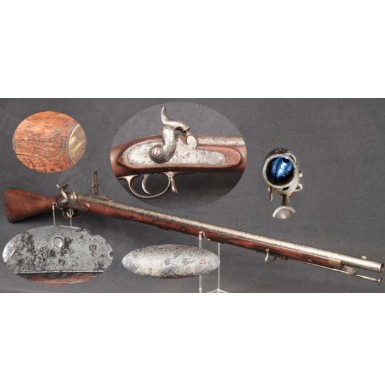 The Pattern 1851 Mini” Rifle is one of the least often encountered of general issue British military percussion long arms. The gun was the first rifled percussion arm to be generally issued to the British line infantry, replacing the smoothbore M-1842 percussion musket. The gun was adopted in 1851 and was manufactured from 1852 through 1854, with some 35,000 total rifle muskets being produced. At the beginning of the Crimean War, the P-1851 was the most advanced weapon in the British military small arms arsenal. It retained much of the styling of the earlier P-1842 musket, with a barrel secured by keys (wedges), and brass pipes to retain the ramrod. Unlike the .75 caliber P-1842, the gun had a slightly smaller bore, measuring .702 and a 39” long barrel that was rifled with four broad, but shallow grooves. An adjustable long-range rear sight was affixed to the upper rear of the barrel, which was graduated to a maximum distance of 900 yards. The balance of the gun was essentially the same as the earlier pattern smoothbore percussion muskets that it was designed to replace. The P-1851’s performed fairly well in the Crimea, but were quickly supplanted by the newly adopted P-1853 “Enfield” Rifle Musket. This gun was a major advance in infantry long arm design and featured a reduced caliber bore of .577, a more advanced rear sight and a barrel secured by clamping barrel bands, instead of the M-1851’s wedges. The P-1851 was so quickly replaced by the new technology of the “Enfield” that at the conclusion of the Crimean War the guns were considered completely obsolete. The hierarchy of the British military expected long arms to have a useable service life of 10 years, and required even obsolete weapons to be held in reserve for emergency issue for at least that long before being offered for sale. The Pattern 1851 Mini” Rifle was held in such low regard after the adoption of the P-1853 that the guns were “stored” outside, exposed to the weather in an area adjacent to the Tower of London known simply as “the ditch”. More than likely this “storage area” was in fact the old moat that surrounded the Tower in earlier days, and it appears that due to a poorly managed and corrupt ordnance supply system, much of the surplus from the war in the Crimea suffered a similar fate. With the coming of the American Civil War, and the urgent need for infantry long arms by both sides, a large number of obsolete British arms were sold as surplus, most of which were sold to the Confederacy by S. Isaac, Campbell & Company. According to Confederate purchasing records, some 14,900 British Pattern 1851 Mini” Rifles were purchased during the early days of the war. Most of these arms were purchased between August of 1861 and January of 1862, with a handful purchased in the summer of 1862. Records indicate that at least 10,000 of these arms (and probably all of them) were purchased from Edward Barnett & Sons of London, who acquired the guns from the British Ordnance Department. Due to the fact that the arms had been left exposed to the elements in the Tower ditch for several years, Barnett refurbished the guns to make them functional. This apparently included the replacement of worn, damaged or missing parts and also involved re-proving the guns at the London Proof House. All known examples of Confederate imported Pattern 1851 Mini” Rifles show at least the remnants of their original British military proofs, as well as a secondary set of London commercial proofs, applied during the Barnett refurbishment process. Barnett sold the majority of the arms to S. Isaac & Campbell at a rate of 40 shillings each, including the socket bayonet, and the Confederacy was charged 44 shillings. The summer of 1862 purchases were sold to the Confederacy at the lower rate of 40 shillings each. The guns were inspected by Messrs Curtis and Hughes, who had been hired by S. Isaac & Campbell to act as viewers of arms. The P-1851’s inspected by Curtis & Hughes bear the inspection mark of CH / 1 in a small circle, on the upper comb of the stock, forward of the buttplate tang. Confederate documents refer to the Pattern 1851 rifle muskets by a number of different names, including “Old Army Pattern, rifled”, “Second Hand Government Rifles”, “Mini” Rifles”, “Second Hand Rifles 1851 Pattern” , “Brown Bess Rifles 1851 Pattern” and “Rifled Brown Bessies”. Pattern 1851 rifle muskets were arriving in Confederate ports no later than January of 1862, with deliveries continuing throughout most of that year. According to the McRae Papers, P-1851’s were included in the cargos of the blockade runners Gladiator, Harriett Pinckney, Southwick, Stephen Hart and Ella Warely. While the guns that were aboard the Ella Warley and Stephen Hart (some 3,520 guns) were lost to capture by the Federal blockading squadron, 11,380 Pattern 1851 Mini” Rifles were successfully delivered to Confederate ports and were subsequently issued for service. These guns had already seen hard use in the Crimea, and saw additional hard service in Confederate hands. The end result is that the P-1851 Mini” Rifle is now a rarely encountered weapon and to my knowledge, less than a dozen Confederate marked P-1851’s are known to exist today.

The Confederate marked and imported P-1851 Mini” Rifle offered here is in about VERY GOOD+ condition. Like most arms that saw Confederate service during the war (especially those that were in use early in the war), the gun shows numerous signs of wear, tear and use in the field. The gun still has a visible CH / 1 CS inspectors mark on the top of the stock comb, forward of the buttplate tang. The lock is engraved in the typical manner for the P-1851 and has the usual (CROWN) / VR at the tail of the lock and the date 1852 / TOWER forward of the hammer. The usual British military (CROWN) / (BROAD ARROW) acceptance mark is present on the lock as well. The original British military proof marks are partially visible at the breech of the musket, but the London commercial proof marks that were applied during the Barnett refurbishment of the gun are still quite crisp and clear. The bottom of the barrel is marked with the usual British military proof and inspection marks and the initials T T, the mark of Birmingham gunmaker Thomas Turner who was one of the six contractors who had produced the P-1851 rifle muskets. The bottom of the barrel also has the assembly mating marks \ | / | | | |, which are repeated on the upper edge of the lock as well. The inside of the lock and the inside face of the hammer have matching punch-dot mating marks, and the interior of the lock also bears the usual Birmingham military inspectors marks, as well as the initials T S, which was probably the lock maker. The stock is marked FLAVELL in the mortise cut under the trigger guard tang. While I can find no reference to a Flavell that worked during the mid-19th century, several generations of Flavells operated as gun makers or assemblers in both London & Birmingham prior to and after the period that this gun was assembled. The mark is likely that of the man who “rough-stocked” the gun, inletting it for the lock, barrel and furniture. This job was done prior to the gun being delivered to the “setter up” who did the final assembly of the gun. The metal of the gun shows a mottled salt and pepper patina, with most of the dark patches associated with areas of pinpricking and peppering. The condition of the metal is consistent throughout the barrel and lock. The bore of the gun is in about GOOD+ to VERY GOOD condition. The bore retains well-defined rifling, and is lightly to moderately pitted along its entire length. A good scrubbing could well improve the overall condition of the bore. Unlike most Pattern 1851 Mini” Rifles, this gun is 100% complete, correct and original. It retains both of the original sling swivels, as well as the complete long-range rear sight (including the delicate ladder and adjustable slide). The gun also retains its original and correct ramrod, which retains barely visible British military inspection marks near the concave button head. The rod is full length and retains good threads on the opposite end. The original Lovell’s Pattern bayonet catch is in place under the barrel. This is another delicate piece that is usually missing when a P-1851 is found available for sale. The lock of the gun is mechanically excellent and functions perfectly on all positions. The brass furniture has a lovely, dark and untouched ochre patina that is very attractive. The stock of the musket is in about FINE overall condition. The stock is solid and sound, with no breaks, cracks or repairs. The stock has been lightly cleaned at some point in time, but does not appear to have been sanded and retains good edges and strong lines throughout. The initial K is carved into the reverse buttstock, and it appears that a name was lightly scratched into the obverse of the buttstock, from the middle of the stock towards the wrist. Unfortunately, the name is no currently legible. The stock does show a number of minor bumps, dings and marks from use during its service life. The musket clearly saw use, but was never really abused.

Overall this is a really wonderful, completely correct and original example of a Confederate imported Pattern 1851 Mini” Rifle. Considering the hard life that the gun likely experienced between the Crimean War and the Civil War, the gun is really in remarkably good condition. The 1852 lock date, which was the first year of production for these guns, all but guarantees the gun saw service during the Crimean War, and the CH / 1 is absolute proof the that musket was subsequently purchased and imported by the Confederacy. As previously noted, less than a dozen of these Confederate marked P-1851 rifle muskets are known to exist today. As such, even the most advanced collections of Confederate purchased British import arms are lacking this scarce and important weapon. The scarcity of any type of P-1851 on the collector market cannot be understated, and even pure British military guns with no Confederate markings or provenance bring mid-four-figure prices when found available for sale. This gun is every bit as Confederate as a Richmond or Fayetteville rifle or musket, and is much, much rarer. Many collectors have sought a P-1851 to purchase for years and have not been able to do so. I am very proud to be able to offer this extremely rare and 100% complete, correct and original Confederate marked P-1851 Mini” Rifle for sale, and I doubt that I will be able to offer another one for quite some time. This is a gun that could truly become the centerpiece of your Confederate imported arms collection, and for the price of a mid-grade Richmond rifle musket. I am confident that you will be extremely pleased with the addition of this gun to your collection.