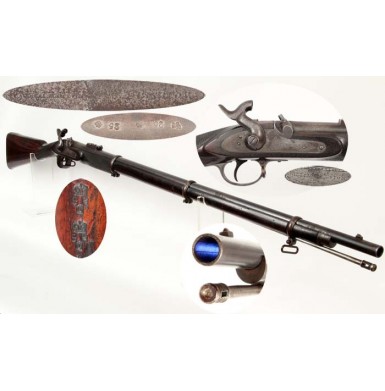 This is one of the most unique and truly scarce Confederate imported arms that I have ever had the opportunity to offer for sale. While we have always known that at a least a few high grade Pattern 1853 and Pattern 1856 “Volunteer Rifles” were imported by the Confederacy during the American Civil War, Confederate marked specimens have long eluded collectors and researchers. The guns have long been referred to by collectors as “Jeff Davis Rifles”, a term coined by collector & author Claude Fuller in his 1944 book Firearms of the Confederacy. Fuller’s attribution refers to a similar high-grade P-1853 Enfield in the Springfield Armory collection, attributed to having been captured with Confederate President Jefferson Davis at the end of the Civil War.

This gun is a very high grade P1853 Enfield Rifle Musket made or retailed by the Brighton gunmaker William Weston. The gun is made with a highly figured and finely checkered walnut stock and is engraved over the majority of the metal surfaces. The gun is also clearly and deeply marked with a pair of Sinclair, Hamilton & Company Confederate import marks, in the wood behind the triggerguard. William Weston was located at 7 Royal Colonnade, Brighton, Sussex from 1825 until 1866. In 1843 the street “Royal Colonnade” was re-named “New Road”. Brighton is an English port city about 50 miles due south of London and about 175 miles south of Birmingham. This gun is quite likely a perfect example of some of the individual rifles and muskets purchased directly from London area gun shops to obtain desperately needed arms for the Confederacy 1861, before significant arms contracts could be negotiated. Caleb Huse (the primary Confederate arms purchaser in England), literally purchased arms one and two at a time from local gun shops when he first arrived in England, in order to expedite the acquisition of small arms for the south. While we may never be able to know if this rifle was simply a way to fill the pressing need for firearms in the south, or if the high quality rifle musket was meant to be a gift or presentation to an important southern officer or political official, there is no doubt that this is a very special gun.

As previously noted, the gun features a highly figured and finely checkered walnut stock, and a significant amount of foliate engraving on the metal parts. The gun is iron mounted throughout, including the buttplate, triggerguard and nose cap. The gun rates at least VERY FINE in overall condition, if not better. The lock is fully engraved, both with the floral themes and the maker/retailers name: WILLIAM WESTON. The lock retains some traces of the original case hardened finish, which has faded and mixed with a mottled plum brown and pewter patina. The hammer is similarly engraved and retains about 30% of the original case hardened finish, blended with a lovely plum brown patina. The lock has an excellent, target grade action, which is incredibly smooth and crisp, and functions flawlessly. The barrel retains about 80%+ of its original deep rust blued finish, with some patches of finish loss, most of which are mixed with a plum brown patina. There are a few patches of minor to moderate patchy surface oxidation along the barrel, which have resulted in a handful of small areas of roughness. These patches also show a mostly faded blue and plum brown patina and seem to be the result of some less than perfect storage or not being cleaned after use. The breech area shows patches of scattered light to moderate pinpricking and peppering, the result of actual use and wear from percussion cap flash. The barrel tang is engraved in the same style as the lock, and the breech is also engraved WILLIAM WESTON BRIGHTON, much like the lock. The word “Brighton” is mostly obscured by pinpricking and cap flash erosion. The barrel exhibits the typical Birmingham commercial proof, view and definitive proof marks at the left side of the breech, interspersed with a pair of 25 gauge marks, indicating .577 caliber. The bottom of the barrel is maker marked by Henry Clive, a major Birmingham barrel maker who worked at 94 Bagot Street from 1838-1865. The bore of the rifle musket is in about FINE+ condition and remains mostly bright throughout, with sharp rifling. There is some light scattered pitting along the length of the bore, with the majority of it located in the last 2”-3” near the muzzle. The barrel bands are all lightly embellished as well, with edge line engraving, similar to the double lines typically found on standard P-1853 Enfield lock plates. The bands have all faded to a plum brown patina, and all retain their screw retention “doughnuts’ on the end of the tension screws. The original rear sight is in place on the barrel and retains about 85%+ original blued finish and is complete and fully functional. Both of the original sling swivels are present on the gun as well, both retaining about 30%+ of their original blue, mixed with the same plum brown patina found throughout the musket. The triggerguard and buttplate are both iron and feature the same style foliate engraving that is found on the lock and tang areas. Both retain traces of their original finish, mixed with a silvered out pewter and plum brown patina. The stud forward of the triggerguard which held the ring for the snap cap is missing, as is the snap cap (nipple protector) that would have originally come with the musket. All of the iron screws have had their heads engraved with a flower petal motif, even the buttplate and triggerguard screws. The original ramrod is present in the channel under the barrel and it is in excellent condition, with fine threads on the end. The walnut stock is truly gorgeous and is made from a furniture grade piece of highly figured walnut. The wrist and the forend are neatly checkered in a very fine way, and most of the checkering retains crisp lines and strong points. There is only some light scattered rounding and smoothing to any of the checkering, from actual handling and use. There are two very crisp and clear (CROWN / SH / C marks in the bottom of the stock, directly behind the triggerguard. This is the mark of Confederate purchasing agents SINCLAIR, HAMILTON & COMPANY. The stock retains excellent, sharp edges and crips lines throughout, with only the normal array of bumps, dings, rubs and nicks from actual handling and use. A single narrow scrape along the upper edge of the left side of the stock, running from the rear lock mounting screw to the breech area is the only mar worth noting specifically. The stock is free of any breaks, cracks or repairs, is full length and completely solid.

Overall this is simply an outstanding condition example of a very high grade example and incredibly scarce Confederate import marked P1853 Enfield “Volunteer” Rifle Musket. According to one of the most noted researchers and authors regarding English arms and equipment purchased by the Confederate government, no other checkered and engraved P-1853 is known to exist which also bears Confederate import marks. This may truly be a one-of-a-kind rifle musket, and it is highly unlikely that you will ever have another opportunity to own a gun like this. The best part of this wonderful gun is that is shows real use and was clearly fired a significant number of times. It was not a Confederate show piece, but a real fighting musket. However, the condition remains fantastic. The rarity of this Enfield is extreme, and for the advanced collector of Civil War era Enfield rifles and muskets, this is a gun that could truly be the centerpiece of a very high quality collection.