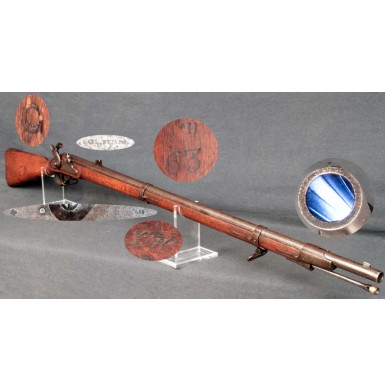 This is a wonderful example of the Austrian M-1854 Lorenz Rifle Musket, as imported by the Confederacy during the course of the American Civil War. The Lorenz was the third most used infantry arm on both sides during the war, and somewhere between with the US importing approximately 250,000 of the guns during the war and the Confederates importing at least 100,000, and quite possibly more. The Confederacy was always thought to have purchased most of their Lorenz’s after Caleb Huse visited Vienna as the Confederate Ordnance Department purchasing agent 1863, however more recent research indicates that Huse purchased his first Lorenz rifle muskets through S. Isaac, Campbell & Co of London in 1862. It appears that many of the guns that were purchased by the Confederacy were in their original 13.9mm caliber (about .547), while many of the US purchased guns were re-bored to more closely approximate the standard US caliber of .58. The importance of the .54 caliber Austrian M-1854 Lorenz to the Confederacy might best be illustrated by an invoice from the famous English ammunition manufacturer Eley Brothers. The invoice is contained within the McRae Papers, and is dated July 18, 1863 “ some two weeks after the Battle of Gettysburg and the fall of Vicksburg, MS. The invoice is for 700,000 paper cartridges. The order included “600,000 Austrian Rifle Cartridges “ Marked A” and “100,000 Ball & Buck Short Musket Cartridges “ Marked M”. While the caliber of the Austrian cartridges is not specified, it seems clear that the order would be for .54-caliber ammunition, as the order contains no request for any .58 ammunition. This order implies that the Confederate Ordnance Department laboratories were capable of supplying a sufficient number of .58 caliber cartridges for the guns in the field, but needed assistance in providing enough ammunition for Lorenz’s and smoothbore muskets.

This particular gun is in the classic “Confederate” configuration, often referred to as a “Type I” by collectors. It retains its original 13.9mm (.54) bore, has a block rear sight, and a cheekrest on the reverse of the buttstock. The gun is dated 860 for 1860 on the lock, forward of the hammer and the double-headed Austrian Eagle is stamped to the rear of the hammer at the tail of the lock. The top of the breech is stamped with the name of Vienna arms maker CARL HEISER. The most interesting mark on the gun is a small capital G, stamped sideways on the obverse of the buttstock. The letter is approximately .35” tall and .25” wide. This same pattern and size of “G” stamp has been noted on a handful of other arms, including a P-1853 rifle musket and an unmarked Model 1840 Light Artillery saber. A second example of an Austrian M-1854 Lorenz with this G mark in the stock is currently on display at The Southern Museum in Kennesaw, GA. The gun is in the same configuration (fixed sight, cheek rest) and is also dated 860. The condition of the displayed rifle is practically identical to the one offered here. (Unfortunately I was not able to discern a maker’s mark through the display case, nor could I determine if the gun was regimentally marked. The gun is on loan and will be available for further inspection in a few weeks.) It is generally believed, within community that is heavily involved with researching the imported arms used by the Confederacy, that the arms marked with this non-standard, small “G” were Georgia used / purchased arms which were marked after they arrived on Southern soil. The larger, better known, “Georgia G" found on Confederate imported Enfield rifle muskets is thought to have been applied while those guns were still in England. This particular Lorenz is additionally marked with a small B over the number 63 in the wood, forward of the triggerguard. With the assumption that the gun is a Georgia gun, it would be reasonable to conclude that this marking means “Company B, 63rd Georgia Infantry”. The 63rd Georgia was organized, and originally stationed in Savannah, GA on coastal defense duty. Companies B & K were subsequently transferred to Battery Wagner in Charleston Harbor, where they fought the battle made famous by the movie “Glory”, and held the fort against the valiant Federal attack lead by one of the first black regiments in US military service, the 54th Massachusetts Infantry. The 63rd GA also participated in the doomed Atlanta Campaign during the summer and early fall of 1864 and fought with Hood’s Army of Tennessee through the battles of Franklin and Nashville and continued through the Carolina’s Campaign, surrendering with General Joe Johnston and the tattered remains of the Army of Tennessee in North Carolina after the Battle of Bentonville. There is a single J carved into the cheek rest of the stock. Only one man with a last name that starts with “J” served in Company B of the 63rd GA “ John T Jones.

This Georgia G marked Austrian M-1854 Lorenz Rifle Musket is in VERY GOOD+ to NEAR FINE condition. The gun is quite crisp with fine edges present on both the metal and the wood. The gun has a lightly oxidized “salt & pepper” appearance to the metal, which shows a mottled gray-brown over pewter patina on all of the metal. There is some scattered light surface peppering and pinpricking over all of the metal surfaces as well. The gun is mechanically excellent and the lock functions crisply on all positions. As previously noted all of the markings on the metal of the gun remain legible and the lock markings remain sharp and clear. The original block rear sight, front sight/bayonet lug and both original sling swivels are present on the rifle. The bore of the gun rates about VERY GOOD+ to NEAR FINE. The original 4-groove Austrian rifling remains crisp, and the bore is mostly bright with some light frosting in the grooves and some scattered patches of light pitting along the length of the bore. The original ramrod is in the channel under the barrel and it is full length, with fine threads on the end. The stock of the rifle rates VERY GOOD+ to NEAR FINE as well. As noted, the stock is crisp and retains sharp edges and shows no signs of ever having been sanded. The “Georgia G” mark and the regimental markings are crisp and clear, with the expected light wear, which has dulled the sharp edges from the stampings. The stock is full length with no breaks, cracks or repairs noted. The stock even retains the cartouche of maker Carl Heiser, a script CH to the rear of the triggerguard. The stock does show the usual bumps and dings from use in the field, as well as a couple of minor gouges and chips. All of this minor “damage” is from actual use in the field and is old, worn and from the period.

Overall this is simply a wonderfully crisp, untouched and unmolested Austrian M-1854 Lorenz Rifle Musket in the very desirable Type I configuration. The gun is almost certainly a Georgia marked Confederate import, and it is very likely that the gun can be further identified to Company B of the 63rd GA and possibly to John T Jones! Untouched Lorenz’s with Confederate use are very difficult to find and this one is a really superb example that will be a fantastic addition to any collection and is worthy of additional research to further nail down its provenance and identity of the man who used it!