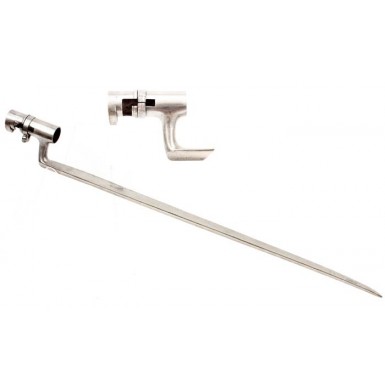 This is a FINE condition example of the angular socket bayonet produced by the Confederacy at their arsenal in Fayetteville, NC. This bayonet was designed to be used on the final production version (aka “Type IV”) of the Fayetteville Rifle, which had a standard front sight/bayonet lug, not on the earlier pattern guns that mounted a saber bayonet. On January 14 of 1864 the Confederate Adjutant & Inspector General’s Office issued General Order #6, which discontinued the manufacture of saber bayonets within the Confederacy. This lead Fayetteville to convert to the manufacture of “shank” or socket bayonets, and to discontinue the manufacture of saber bayonets and the mounting lugs for the rifles. Fayetteville received their bayonet making machinery from the English company Greenwood & Batley. This same firm had supplied bayonet-making machinery to the Bay State Tool Company at the beginning of the American Civil War. Bay State Tool had manufactured the first pattern socket bayonets for the Spencer Rifle, as well as the socket bayonets used on the Massachusetts “Drake” alteration M-1841 Mississippi Rifles. The machinery that Greenwood and Batley provided was apparently originally designed to manufacture the Spanish Pattern 1857 socket bayonet. These bayonets had been produced by Birmingham cutlers to go with orders for Spanish M-1857 rifle muskets that were manufactured in Birmingham on contract for Spain. All four of these bayonets have a distinctive sharp angle on the bottom of the shank at the blade to shank juncture, and have rear flutes that pass through the neck of the bayonet, rather than stopping at the shank. They also have a longer than normal for the period blade, that tapers more dramatically than the US bayonets of the period. The typical mid-19th century socket bayonet was equipped with a blade between 17 ““ and 18” in length. However, the Spanish bayonet and the Spencer had 18 ““ blades, while the Fayetteville and Drake bayonets has nominally 20” long blades. The extra blade lengths on the last two were to make up for the fact that the 33” long rifle barrel was not quite long enough, when mounted with an 18” blade, to effectively guard against cavalry.

The Fayetteville socket bayonet is depicted in Robert Reilly’s American Socket Bayonets & Scabbards as item #B116. This particular bayonet conforms very well to the dimensions set forth by Reilly and also has some physical features that are clearly Confederate. The bayonet has a 3” socket and a 19 7/8” blade. The bore diameter of the bayonet is .896”, only slightly larger than the nominal diameter of .889” referenced in Reilly’s book. This minor variation is more than acceptable on a hand-finished bayonet. The socket is also bored somewhat off center, a common feature on Confederate made bayonets that were often produced by craftsmen that were not skilled machinists and bayonet forgers. The blade is 13/16” wide at its widest point. The bayonet is completely unmarked, as it should be. The other salient feature is the face flute, which is somewhat cruder in its overall finish and application than an US bayonet. The flue shows some machine marks and rough finishing marks that were not completely polished out. The bayonet also features the typically crude locking ring stud on the socket that is not nearly as well finished as on Drake pattern bayonets or other US made bayonets. The overall condition of the bayonet is about FINE. The blade and socket retain the large majority of their original arsenal bright finish, which is toning to a pewter patina with some small scattered areas of minor age discoloration and very light surface oxidation. The bayonet blade is almost entirely smooth metal, with no pitting present and only a couple of tiny areas of the most minor pinpricking present. The original locking ring is present and is complete and functional, along with the typical large domed tension screw that is found on the Fayetteville bayonet locking ring. The socket has the same smooth, bright toning to pewter appearance as the blade, and matches perfectly. The socket and neck do show a little bit more scattered pinpricking than the blade does, but this is quite minor.

Overall this is a great example of a relatively scarce and desirable Confederate made socket bayonet from the waning days of the American Civil War. The Fayetteville made socket bayonet is one of the most reasonably priced of all Confederate made bayonets, but they are still regularly priced in the $1,000+ range when they are found in this condition. I have this example priced below market, to make it a quick sell to put in a Confederate collectors’ Christmas stocking. This is a very nice Confederate Fayetteville bayonet that will be a great addition to your collection and at a very reasonable price.