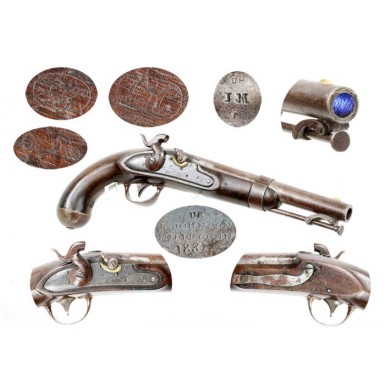 Confederate Fayetteville Conversion of a US M-1836 Pistol

This is a VERY GOOD+ to NEAR FINE condition example of a US M-1836 flintlock pistol, altered to percussion in the Confederacy. Robert Johnson of Middleton, CT, originally manufactured the .54 caliber, smoothbore pistol. Johnson produced 18,000 of the pistols under contract for the US Ordnance Department between 1836 and 1844. The M-1836 was the last US military flintlock pistol and was subsequently replaced by the US M-1842 percussion pistol. This pistol was originally produced in 1837, and is clearly marked with that date on the lock. The pistol was obviously sent to a southern state under the Militia Act of 1808 and was in a southern arsenal when the American Civil War broke out. It was subsequently altered to percussion in one of the shops and arsenals scattered around the south that worked feverishly to alter as many useable flintlock weapons to percussion as possible when the war broke out. The pistol was altered to percussion at the Fayetteville Arsenal, in Fayetteville, NC. An examination of similar arms in the seminal work Confederate Rifles & Muskets by Dr. John Murphy and Howard Madaus, clearly show the features that allow the location of the alteration to be identified. The pistol has the very distinctive “Fayetteville” style “S’ shaped hammer, as well as the drum bolster conversion complete with the clean out screw. Plate 2, on page 193 of the Murphy & Madaus reference clearly show an identical example of this alteration. Murphy & Madaus note that alphanumeric reassembly marks are usually encountered on these pistols, and this one is no exception. Two different sets of reassembly marks are present, indicating that the barrel alteration and the lock alteration were performed by different workmen at different times and the parts were reassembled at a later time, possibly by a third workman. The alphanumeric mark W 13 is found inside the lock mortise and on the rear of the breech plug. This mark mates the barrel to the stock. The primary reassembly mark 9 GG is found on the inside of the hammer neck (the hammer must be removed to see this), inside the lock plate and on the stock flat opposite the lock, under the original US inspection cartouches. The marks on the stock flat are slightly worn and somewhat difficult to see. According to Murphy & Madaus, records reveal that 1,093 US M-1836 pistols were altered to percussion at the Fayetteville Arsenal, and most extant examples are found on Robert Johnson contract pistols, with lock dates between 1837 and 1840.

As previously noted, the pistol is in VERY GOOD+ to NEAR FINE condition. The gun has a nice, tobacco patina over most of the barrel, which has a slightly mottled appearance with the brown over a mostly smooth, pewter base color. There is some light flash pitting around the breech and bolster area, as well as some scattered light patches of oxidized age discoloration and minor pinpricking on the pistol. The lock retains strong traces of its original dark blue-black case hardened finish, and remains extremely well marked. The lock is marked in four lines forward of the hammer:

The lock has had the external flintlock parts removed, and the associated holes plugged. The bolster is the typical Fayetteville pistol alteration bolster, a threaded drum which is screwed into the enlarged touch hole, supported by the remnants of the original brass flash pan. The bolster has a clean out screw as do the other extant examples noted by Murphy & Madaus. The hammer is the classic “S’ shaped Fayetteville hammer, with neatly cut coarse checkering on the spur. The lock of the pistol functions flawlessly, is very crisp and remains mechanically excellent. Internally the lock parts retain much of their original polish or fire blued finish, as appropriate to the part. The barrel of the pistol is quite smooth and still retains legible proof and inspection marks at the breech. The breech is clearly marked in three lines are a U.S. / JM / P. The bore is in about GOOD condition. It is mostly dark with moderate pitting along its entire length. The original captive ramrod is in place under the barrel and functions smoothly, as it should. The original brass blade front sight is in place on the end of the barrel as well a the original iron notch on the top of the breech tang at the rear of the barrel. An often encountered “southern” sighting modification is present as well, a notch filed in the barrel band that aligns with both the front and rear sights. The iron furniture is in the same condition as the balance of the pistol, being mostly smooth with a pewter base cover and mottled chocolate brown patina over much of the surfaces. The metal shows only some minor scattered pinpricking and peppering. The stock of the pistol is in VERY GOOD+ condition as well. It remains fairly crisp and does not appear to have been sanded. The stock is solid and complete with no breaks or repairs noted. There is one short grain crack running from the rear lock mounting screw up to the barrel channel. This is a common place to find a crack and is usually the result of the lock screw being over tightened. The stock flat retains two very good original US inspector’s cartouches. The forward cartouche is a script JM in an oval, the mark of arsenal sub-inspector Justin Murphy. It is his initials that are found on the barrel as well. The final acceptance cartouche are the script letters HKC, the mark of Captain (eventually Colonel) Henry Knox Craig of the US Ordnance Department. Underneath the original US inspection marks are the Fayetteville arsenal reassembly marks 9 GG. The stock remains relatively crisp and sharp, but does show the expected scattered light bumps, dings and mars of a military service pistol that likely saw use in the Mexican War as a flintlock and subsequently saw Civil War service in Confederate hands. The stock is free of any serious abuse or damage.

Overall this is a very attractive, 100% complete, correct and solid example of a scarce Confederate altered US M-1836 pistol. With only 1,093 of these pistols altered at Fayetteville, these are fairly rare and not regularly encountered pistols. Although the guns were woefully obsolete long before the outbreak of the Civil War, these single shot pistols saw significant service in the Confederacy during the early part of the war. While more modern and effective percussion revolvers quickly replaced them, when the war broke out, these percussion altered single shots were certainly better than no pistol at all. These guns are every bit as Confederate as any southern manufactured pistol like a Griswold & Gunnison or a Leech & Rigdon, and for about 10% of the price! There is probably nowhere else you can purchase a completely authentic Confederate pistol that is 100% complete and correct (and in such nice condition) for the price of an upper midgrade US rifle musket!