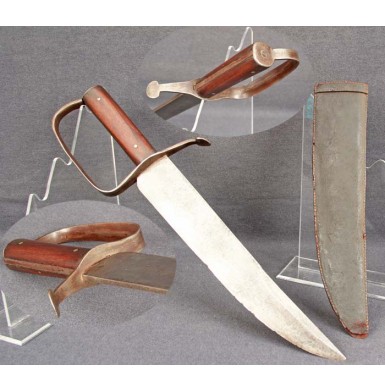 There is probably no more iconic Civil War image than that of the young Confederate soldier, heading off to war with an absurdly large fighting knife in his hand or on his belt. Early war southern ambrotypes and tintypes provide us a dizzying array of large, wicked, and sometimes comical fighting knives of all descriptions, usually made by local blacksmiths for the boys of 1861 to take to war. Over the years, the majority of these local knife makers have remained anonymous, although sometimes certain traits and characteristics of surviving knives can help us to make general statements about the likely region or state that an unmarked knife may have originated in. More recent scholarship has allowed us to identify some knives as to their maker, even though they bear no markings. The classic southern fighting knife was usually overly large and robust, with an overall length that was typically between 12” and 24” and with blades that varied from about 8” to over 18”!

This knife was produced by an unknown southern artisan, who tried to produce a functional fighting knife with some sense of art and aesthetic lines. The shaping and tapering of the iron knucklebow best illustrates this aesthetic sense, as does the spade shaped final that tops the upswept quillon of the guard. The knife is of a better quality than would normally be expected from a typical local blacksmith and is probably what would be most appropriately referred to as a “factory made knife”, rather than a “blacksmith made knife”. While the knife is from an unidentified maker it does have characteristics that are similar to known maker knives. The two-piece slab grip scales, secured by pins are very similar in shape and design to those found on some of the knives by Louis Froelich at his Confederate States Armory, which was eventually to be located (after a couple of relocations) in Kenansville, NC. A good example of these very similar Froelich grip panels can be found on page 85 of the newly released book Confederate Bowie Knives. The features of the guard and hilt are also quite similar to other knives pictured that are of North Carolina origin. The blade shape is more reminiscent of those knives made in Georgia or Louisiana, with the extended clip point, and the angled choil at the ricasso. Several Georgia Arsenal knives with very similar blades are pictured in the new book, and a Louisiana D Guard with a similar finial on the quillon is pictured on page 209 as well. While the authentication of Confederate fighting knives can be problematic at best, one feature appears quite universally in the better-made ones that I have handled. No matter how awkward or strange they appear, they usually handle and balance very well in your hand. This large knife passes that test with flying colors. Its origin, provenance and the collection from which it comes provide additional testimony to its absolute authenticity.

The knife weighs in at a hefty 1lb 12oz and is 18” in overall length. The slightly upswept clip-point Bowie blade is 12 11/16” long and the hilt is 5 ““ in length. The blade, as is typical of southern wartime knives, appears to be made from a recycled piece of steel; in this case most likely a wagon spring. The blade is 2 1/16” wide at the widest point, near the ricasso, with an approximately ““ long and wide choil cut at a 45-degree angle to the blade. The blade has a 5 ““ long, unsharpened false edge near the tip. The spine of the heavy blade is just under ““ (.23”) wide at the ricasso, narrowing to about 3/32” wide at the tip. The large, flat, D-shaped knuckle guard is about 2 ““ (on average) from the hilt and is just under 5 ““ long. The guard is about 7/8” wide at the widest point, and tapers to about 5/8” wide at the rear of the hilt. The guard forms the pommel cap of the hilt with a 1 ““ diameter disc, which is integral to the knuckle guard and is secured by peening the tang of the knife through this disc. The upswept quillon of the guard extends about 2” above the spine of the blade and terminates in a spade shaped projection that is about ““ long and about 15/16” wide. The scales (grip panels) are made from a dark, straight-grained hardwood, probably walnut. The grip panels are about 4 15/16” in length, and are about 1 ““ in both height and width, and have a hand filling girth of about 3 7/8”. The grip panels are secured to the knife by a pair of brass pins that have been peened. The knife is in about VERY GOOD+ condition. The blade has a medium pewter patina, with scattered areas of lightly oxidized salt & peppering and minor age discoloration. The blade is almost entirely smooth with only some minor patches of light pinpricking present. The edge of the blade shows a number of nicks and wear marks, and the blade shows some minor sharpening marks as well. The guard has a darker gray patina than the blade, with a mottled brown patina scattered over the guard. The wooden grip panels are smooth and free of any breaks, cracks or repairs. They do show some light handling marks and minor dings, but nothing serious. The thin leather scabbard is about 12 7/16” in length and fits he blade like a glove. Like the scabbards of so many Confederate knives, it appears much too flimsy to support and carry the knife for any length of time. The damage to the scabbard from wear and use are testimony to this, and are probably the reason that the knife has survived to today. It was almost certainly sent home from the field when it was found impractical to carry. The scabbard is in about GOOD condition. The scabbard is constructed with two thin pieces of leather, sewn together along their outer edges. The throat of the scabbard is reinforced with a 9/16” wide strip of leather on both the front and the rear. A 4 5/8” long belt loop is stitched to the rear of the scabbard. It is only 5/8” wide and can accommodate a belt of about 3 ““ in width. An additional belt loop, about ““ wide and 3 ““ long was formed by simply cutting the rear of the scabbard. It is not clear if the integral belt loop was done before or after the addition of the sewn on belt loop. Neither would seem to do a very good job of supporting this heavy knife on a belt. The very tip of the scabbard is gone, and most of the stitching has opened along the blade edge side of the scabbard. Only a small area, about 2” long, roughly 3” from the tip, remains securely stitched on that side. There is also a thin piece of brass wire securing the two halves at the throat, along the blade edge side of the scabbard. The spine side of the scabbard remains tightly stitched along the majority of its length, with only the region near the tip having begun to open up.

Overall this is a really attractive and very imposing example of the classic blacksmith made Confederate D Guard Bowie Knife. The knife comes from a fantastic collection (possibly the best private collection there is) of fine Confederate fighting knives, and the new owner will be provided with this information and known chain of provenance. In fact this knife is from the collection that provide 42 of the knives published in the new book: Confederate Bowie Knives by Jack Melton, Josh Phillips & John Sexton. Every collection of Civil War era arms needs at least one fighting knife in it, and there is nothing better to fill this void than a Confederate D-Guard. This is a great looking knife that displays wonderfully and will certainly be a great centerpiece to any advanced Civil War collection or display.