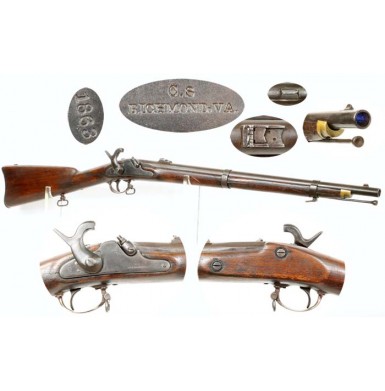 During the course of the American Civil War, no Confederate arms manufactory ever produced as many firearms for the Confederate cause as the Richmond Armory. The armory utilized the rifle musket making machinery captured at the US arsenal in Harper’s Ferry, and managed to produce more than 37,000 long arms, not counting the thousands of weapons that were repaired and altered at that facility. The largest majority of that production were rifle muskets, based upon the US M1855/61 patterns, with just over 31,000 produced between October of 1861 and January of 1865; no new arms are known to have been produced at Richmond after January of 1865. The second largest group of long arms was the .58 caliber Rifled Carbine, with about 5,400 produced between November of 1862 and January of 1865. One thing that makes Richmond Carbines so unique that they are the most inconsistent of Richmond made arms in terms of features. Many Richmond carbines were assembled with a mixture of Richmond made parts and older parts that were on hand from Harpers Ferry or from parts scavenged from damaged arms and battlefield recoveries. In fact, thanks to Paul Davis’ research in his authoritative book CS Armory Richmond, we know that at least 622 .58 caliber Richmond carbines were produced utilizing “old barrels”. Other parts from salvaged US arms that are known to be used on Richmond carbines include M1861 locks, M1855 stocks and patch boxes, M1861 nose caps and M1861 iron butt plates, just to name a few.

Richmond Rifled Carbines do have a number of consistent features. They are nominally 41” in overall length, with a barrel that is 25” long, secured to the nominally 38 ““ stock by two spring-retained, flat, solid iron barrel bands. The bands are usually stamped with the “U” mark indicating UP, but are usually much less consistently marked than their US made counterparts. The majority of Richmond carbines have a plain, unmarked brass butt plates, but do appear with repurposed iron buttplates as well. Later production, Richmond-made brass nose caps secured by a single iron screw are most common, but again earlier production Richmond nose caps, as well repurposed US nose caps appear as well. Most surviving examples have Richmond produced locks, although re-used US locks are not unknown. The standard rear sight was a Richmond produced sight based upon the US M1858 rear sight, while other salvaged US sites do appear from time to time. The front sight was a very distinctive, Richmond-made “pinched” front sight that was brazed to the barrel about 1” from the muzzle. The ramrod was typically a Richmond-made, thin-shank iron rod with a tulip shaped head and without the swell found on US M1855 and M1861 style rods. The guns were equipped with three sling swivels instead of the more conventional carbine sling bar and ring. Two swivels were mounted in the traditional long arm locations; on the trigger guard and the upper barrel band. The third was screwed into the toe of the stock about 1 ““ from the rear of the trigger guard tang. Most of the guns utilized Richmond made stocks, with the lock mortise inlet with the distinctive “Mules Foot” bearing surface in the wood, and without the additional cut outs needed to accommodate the M1855 Maynard Tape Priming lock works. However, at least some older M1855 stocks were utilized, and a number of the carbines were produced with M1855 style iron patch boxes. The Richmond made stocks are typically unmarked.

The .58 Richmond Carbine offered here is in about GOOD+ to NEAR VERY GOOD overall condition, and like most of the guns is a composite of Richmond made parts, repurposed US parts and left-over Harpers Ferry parts. The carbine has the Type III Low Hump Richmond lock that is marked in two horizontal lines forward of the hammer: C.S / RICHMOND VA. The rear of the lock is stamped vertically with the date 1863. At some point during 1863 production the date die was damaged, resulting in the “8” being incomplete on the guns made later in the year. The die continued to degrade as it was used, the latest production 1863 guns having the least complete “8’s. This gun was made prior to the die break, and was likely manufactured during the first half of 1863. The lock itself is in about VERY GOOD condition showing some file and crude finishing marks typical of Richmond work, and retaining very crisp and clear markings. The lock remains fully functional and operates correctly, and appears to be a combination of Richmond made internal components and repurposed US lock components. The exterior of the lock has a mostly smooth, plum-brown patina with some areas of light pitting around the bolster. The hammer has somewhat crude cross-hatching on the spur, certainly much cruder than a US made hammer. The barrel appears to be Richmond made as well, as the mortise for the rear sight shows a crude “steady pin” cut typical of Richmond work, rather than the well machined “T” shaped cut found on a US M1855 barrels. M1861 barrels do not have the projecting “steady pin” cut found on the Richmond made barrels and US M1855 barrels. The barrel has a faint set of V / P / (Eagle Head) proof marks on the left angled flat at the breech, and no date is visible on the top of the breech. The rear sight appears to be Richmond work, with a US M1855 type base with a steady pin, and the swept-wing shaped elevating leaves. The long-range, 500-yard leaf is missing, but the L-shaped 100-yard/300-yard leaf remains in place. This leaf is more crudely made than would be expected of US arsenal work, and retains only a faint 3 mark on the mid-range leaf. The front sight is a wonderful example of the classic Richmond “pinched” front sight. The bore of the carbine is in GOOD condition. It is dark, dirty, heavily oxidized and even light pitting along its entire length. While rifling is visible in the bore, it appears quite weak. A good cleaning might improve the condition of the bore somewhat and make the rifling more apparent. The rear barrel band appears to be a re-used US band, with a well centered “U” mark. The band is correctly positioned about 9 3/8” from the breech plug. The upper barrel band is probably a Richmond-made iron band with an offset “U” mark, stamped about ““ higher than would be normal on a US made barrel band. This band is also correctly spaced at about 18 13/16” from the breech. The carbine retains all three sling swivels, including the ones on the trigger guard and upper band, as well as the one screwed into the toe of the stock about 1 ““ from the rear of the trigger guard. The original Richmond “thin shank”, tulip head iron ramrod is present as well, and is full-length, including the threads at the end. All of the iron surfaces of the gun have an even plum-brown patina that may have been chemically enhanced in some areas to make it so even. There is some scattered light pitting across nearly all of the iron surfaces of the barrel, bands and trigger guard, which seems to be the result of poor storage over the years. The breech shows more moderate pitting around the bolster, as would be expected. The gun was probably lightly cleaned long ago, has toned down and oxidized with time, and at some point, might have had a little chemical help to make it more attractive. It is worth noting that the barrel under the rear sight and the bottom of the rear sight base both had a crusty, lightly rusted and evenly oxidized appearance, suggesting years of poor storage in a location like an attic. The Richmond-made brass nose cap has deep, untouched ocher color to it. The nose cap is the late production Richmond-type, secured by a single iron screw. The buttplate is an unmarked iron one, rather than a Richmond-made brass one. Since the buttplate is not “US’ marked, it was probably part of the group of unfinished parts from Harpers Ferry that were eventually used up. Since most of these unmarked iron buttplates ended up on 1862 production rifle muskets, it may well have been scavenged from a damaged Richmond musket returned the armory for repair or dismantling to recover parts. The walnut stock is Richmond-made as well, and is in about GOOD+ to NEAR VERY GOOD condition. The lock mortise has the classic “Mule’s Foot” inletting found on Richmond made gun stocks, which is clearly pictured below. The stock has a crack inside the lock mortise area that shows an old glue repair, and which remains solid. There is also some wood loss due to burn-out behind hammer, to the rear of the bolster. This is commensurate with the pitting on the breech, the condition of the bore, and is completely expected. The stock shows some rough finishing marks, including some draw filing around the wrist, not uncommon on Richmond stocks. The stock has been lightly sanded, resulting in the edges being softened somewhat. The stock also shows the usual assortment of scattered bumps, dings, and mars that one would expect from a military arm that saw service. The wood to metal fit is excellent throughout, and shows a high level of fit and finish and underscores the skill of the craftsmen and artificer’s who worked at the Richmond Armory.

Overall this is a really attractive and complete example of a Richmond Armory produced .58 caliber rifled carbine. These guns represent slightly less than 15% of the total Richmond Armory production, with about one of them produced for every six of the rifle muskets that were assembled. For most collectors of Confederate arms the “holy grail” is to own a gun with the romantic name “RICHMOND” on it. However, the frequent alteration, modification and downright faking of Richmond arms makes them a dangerous place for collectors to place their money. That is why I have provided so much information in this description and so many pictures “ both internal and external to see all of the features that make this an authentic Richmond carbine. Richmond arms tend to be priced all over the place these days, with the motivating factor often being the price paid for the gun during the height of prices back around the year 2000. Back then rough Richmond carbines were often priced at $10,000 and great ones at more than $15,000. This is one example of a Confederate Richmond Armory .58 Muzzleloading Carbine that is real, has nice eye appeal and that you will be very proud to own. It also priced realistically for the current market, and represents a wonderful opportunity to own a legitimate “Richmond” for a very fair price.