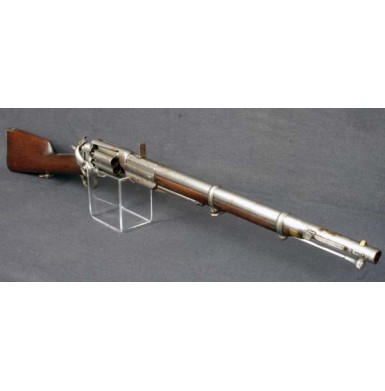 Over the last few years I have had the opportunity to offer some really rare and exciting Civil War era firearms for sale. More than once I have sold an item and really wished that I had held it back as a collector’s piece for myself, because I knew that the rarity or quality would difficult, if not impossible to ever replace. This item that I am offering here will likely fall into that category once I sell it “ it is destined to be an item that I will wish I have kept! This is one of the rarest and least often seen far sale variations of the Colt M-1855 Revolving Carbine, the Artillery Carbine.

Between 1856 and 1864 Colt produced approximately 4,435 revolving carbines in a variety calibers (.36, .44 & .56) and barrel lengths from 15” to 24”. The guns were all produced on Elisha King Root’s patents for a side hammer action that allowed for a removable cylinder pin that was removed from the rear instead of the front of the frame. All of the carbines were produced without a wooden forend, except for the very rare “Artillery” model, which had a wooden forend which was secured by one or two clamping barrel bands and had a brass nose cap, similar to that found on an Enfield rifle or musket. The other distinguishing characteristics of the scare artillery carbine are a lug for mounting a saber bayonet on the right side of muzzle, with a 2 7/8” long key and a 24” long barrel “ the only carbine made with that odd barrel length. According to the late Robert M. Reilly, noted arms historian and researcher, Colt manufactured only 62 of these artillery carbines, and all were delivered on a contract to the US government. Based upon the few extant examples it seems that the Federal government retained none of the arms all of them were issued to the various states under the Militia Act of 1808. A large number of these guns apparently went to North Carolina, as a number of extant examples in private and public collections have a North Carolina provenance, and some exist with specific identifications. This wonderful Colt carbine conforms to the artillery carbine specifications in every way except for one “ it has the more standard 21” carbine barrel. The gun is in every other way an Artillery Carbine and was clearly produced by Colt in this configuration. It is a 5-shot, .56 caliber revolving carbine with a 21” barrel. The gun is mounted with the correct 3-leaf site, with a middle fixed leaf for 100 yards and two additional flip up leaves for 300 and 500 yards. Colt used this same pattern of rear site for the Mississippi rifles that they converted to .58 caliber. The gun has the requisite wooden forearm with a brass nose cap, which is retained by two clamping barrel bands, the lower of which has a sling swivel. The gun has the correct style saber bayonet lug on the right side of the muzzle, with the correct 2 7/8” long key. The loading lever is mounted flush with the forend bottom and not with the bottom of the barrel as in all other Colt carbines. Since there are so many variations in Colt revolving carbines and rifles (even the few artillery carbines were produced had minor physical variations) it seems logical that the 21” barreled version was simply another typical Colt expedient to produce an item that had been ordered with available parts on hand.

The revolving carbine offered here is in about VERY GOOD+ condition overall. Although it retains no original finish, the metal is almost universally smooth with only some light scattered peppering and pinpricking present, along with some very light scattered patches of minor oxidation on the frame and some very small areas on the cylinder. There are a few patches of darker scattered age staining present on the barrel as well. The metal retains sharp edges throughout and good definition, especially on the octagon section of the barrel just forward of the cylinder. The bore is about good to very good with strong rifling present and even scattered light pitting present over its entire length. The original saber bayonet lug is present on the right side of the barrel and has been modified long ago to accept a different saber bayonet than the one originally designed for the gun. The 2 7/8” long key has been ground down to a much shorter 1 7/8” long key- allowing a different saber bayonet to be fit to the gun while it was in service. As noted earlier, the gun retains its correct and original multi-leaf rear site. The gun also retains its original, full length cleaning rod, complete with threads, which secure the rod in place by threading into the receiver. The gun retains both of its original sling swivels, one on the lower barrel band and one on the tang to the rear of the trigger guard. The revolving carbine functions very well and the action remains tight and crisp. The gun indexes and locks up, as it should. The ratcheting loading lever also works perfectly. The top of the frame is clearly marked in the sighting groove:
COL. COLT HARTFORD CT U.S.A.
The gun is serial numbered 2499 on the lower tang of the trigger guard, on the bottom of the frame, on the cylinder arbor pin and on the bottom of the barrel, under the wooden forend (which must be carefully removed to see the number). The loading lever does not appear to be numbered, and the cylinder is not numbered to the gun, with a well worn serial number 18XX visible in the rotational groove on its rear face. Considering the matching condition of the cylinder to the gun and the fact these cylinders were known to burst in use, I feel that the cylinder was likely replaced during the period of use. The oil-finished buttstock is in about very good condition and shows a significant number of bumps, dings, bruises and rubs from use. The sliding trapdoor in the butt to hold the cleaning rod extension is present and fully functional, but the trap is empty. The forend also shows a number of bumps, dings and bruises, as well as a couple of minor cracks and a small repair. The forend design is quite fragile and “navy” style locking latch for the loading lever that is inlet into the forearm makes it very thin in that region. There are two small cracks on either side of the locking latch, and a small crack that has been repaired with some wood filler for stabilization in the groove of the forearm, under the loading lever. These are clearly shown in the pictures below and in no way effect the integrity or display of this wonderful carbine. These minor issues are mentioned for exactness.

Colt revolving military arms are always very collectible and highly sought after. Typically they are found with significant condition issues a variety of modern replacement parts. This gun is 100% original Colt, even if the cylinder is mismatched. These artillery style carbines are extremely scarce and are seldom offered on the market for sale. While it is only conjecture, many serious collectors feel that nearly every one of these carbines went to war in the hands of a southern soldier. This particular gun came out of a very old collection from a North Georgia estate and is completely fresh to the market. If you have ever wanted to add one of these very rare and seldom encountered full-stock military revolving carbines to your collection of Civil War or Colt guns, now is likely the only chance you will have for quite some time. I am sure I am going to regret selling this wonderful carbine.