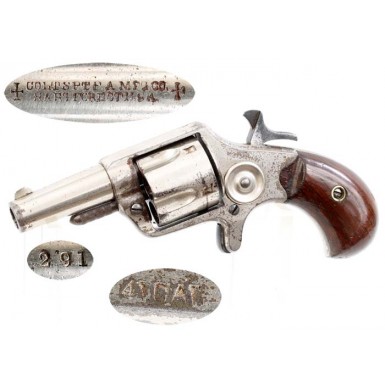 Offered here is a FINE condition example of a very early production, 1st Model Colt New Line .41 Rimfire Pocket Revolver. The New Line .41 revolvers had the largest of the New Line frames and were only produced for six years, from 1874 to 1879. During that time frame only 9,363 .41 caliber New Line revolvers were produced, making it the second rarest of the New Lines, second only to the .38 caliber variants. Because the revolver is such an early production example (serial number 291) there is no acid etched panel on the left side of the barrel. Instead the left side of the frame, below the cylinder is stamped 41 CAL. The revolver is from the begging of the first year of production of the .38 & .41RF New Lines, as 1874 production ran from approximately serial #1 to about #1,000. As a first model the revolver has the short cylinder flutes, with stop notches cut on the rear side of the cylinder, rather than the rear face. The top of the 2 3/16” long round barrel is clearly roll marked in two lines: COLT’s PT.F.A. Co / HARTFORD, CT. U.S.A.. The barrel address is bracketed by a pair of Maltese Crosses, one at each end. The very low, three-digit serial number 291 is stamped on the bottom of barrel, on the rear face of the cylinder between two of the chambers and on the left side of the bird’s head grip frame, under the grip panel. Both grip panels are numbered 291 in faded ink in a period hand on their interior surfaces. As noted above, the revolver is in about FINE condition. It retains about 65%+ of its original nickeled finish overall. The barrel retains about 80%+, with only some minor high edge loss, especially around the muzzle and some small patches of minor flaking and wear. The frame retains less finish, about 60% and show moderate flaking and loss from carry and use. The cylinder shows slightly more flaking than the frame and retains about 50%+ of its finish, with moderate flaking, and wear around the entire cylinder. The nickel has a nice, medium bright appearance and remaining nickel has the polished look that approximates the level brilliance the revolver had when new. The areas where the nickel has flaked and worn have developed a smooth, dark, chocolate brown patina. The metal is almost entirely smooth and free of any significant pitting, although there is some scattered pinpricking present. There is also some scattered surface oxidation and flecks of oxidized surface scale are scattered on the frame and cylinder. All markings in the metal are crisp, sharp and fully legible, with the exception of the “41 CAL” mark, which is slightly blurred due to flaking and finish loss on the lower portion of the frame. The top side of the hammer retains about 40% of its original niter blued finish, with the sides showing a moderately oxidized, mottled brown and gray appearance. The niter blued trigger retains a similar amount of its original finish as well, and like the hammer has dulled and faded significantly and is no longer very vibrant. The screws all retain strong traces of their niter blued finish as well, but show significant dulling and fading. The screws show some moderate slot wear also. The blued cylinder arbor pin has a faded dusky bluish patina, and the knurling shows some flattening and wear, the result of someone muscling out the pin with the help of pliers. The bore of the revolver is in about FINE overall condition and is mostly bright with crisp rifling, showing only some minor pinpricking along its length and some light pitting near the muzzle. The original German silver front sight is in place on the barrel but shows a rather significant bend to the left, indication the revolver was probably dropped on the sight at some point in time. The revolver is mechanically FINE and functions correctly on all positions. The revolver indexes, times and locks up exactly as it should. The two-piece grips are in FINE condition as well and as noted they are correctly numbered to the revolver. The grips appear to be walnut, rather than the more commonly encountered rosewood. The grips are solid and complete and are free of any breaks, cracks or repairs. They retain about 50%+ of their original varnish, with most of the loss along the high edges and contact points. The grips show some minor surface scuffs and some light bumps and dings from carry, use and storage, but show no signs of abuse.

Overall, this is a solid and crisp example of the largest sized Colt New Line Revolvers. The gun is 100% complete, correct and original and retains the large majority of its original nickel finish. With less than 10,000 of these powerful little revolvers manufactured over the six-year period form 1874-1879, it can be difficult to find these large bore pocket pistols. This is a very nice example that is worthy of being added to any nice collection of New Line Colt revolvers. This is one of those no excuses revolvers that displays well and is a good value, as you can rarely purchase an old west period Colt revolver for under $600, particularly in .41 caliber and with this much original finish.