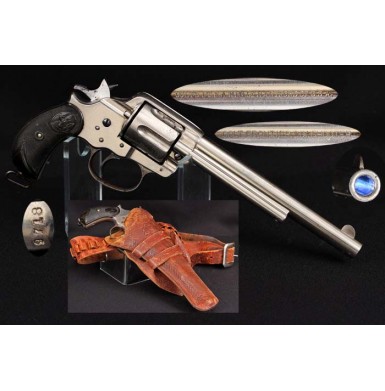 The Colt Frontier Model of 1878 represented a major departure in design philosophy from that firmly established by Colonel Colt when he started the Colt Patent Firearms Company. The “Frontier” was the first large frame, large caliber, double-action handgun to be produced by Colt, and was a hybrid between their incredibly successful M-1873 Single Action Army and the M-1877 Double Action Revolver (better known as “Lightning”, “Thunderer” or “Rainmaker” depending upon caliber), which had been introduced the previous year. During his lifetime, Samuel Colt had repeatedly argued that double action revolvers were difficult to shoot due to their heavy trigger pulls and were unsafe when compared to single action models. However, less than 20 years after his death, the company that he created dove head first into the double action revolver market, and never looked back. The M-1877 revolver was a mid-sized, double action revolver chambered in either .38 Colt (Lighting), .41 Colt (Thunderer) or very rarely in .32 Colt (Rainmaker). The model was the Colt company’s first foray into the production of a double action mechanism and was met with mixed reviews upon release. For the average customer on the American frontier, the guns lacked two important features that both revolved around ammunition. They were not chambered in a major, “man-stopping” caliber like .45 Colt, .44-40, or .38-40 and they did not allow the interchangeable use of ammunition between the revolver and a rifle, like the .44-40 and .38-40 did. Colt addressed this in 1878 with the release of the Double Action Frontier Model of 1878. This revolver was a hybrid of the large frame Single Action Army revolver, combined with the lock work and birds head grip of the Lighting / Thunderer series. The guns were offered in a wide array of large and medium bore chamberings like the Single Action Army was, with the expected calibers of .45 Colt, .44 WCF and .38 WCF leading the pack in popularity. The M-1878 was Colt’s first big bore double action revolver, but it still resembled the single action variants. It had a frame-mounted gate through which the gun was loaded and unloaded, just like a single action revolver. It would be six more years before Colt would revolutionize double-action revolvers with the swing-out cylinder design of the M-1889 revolver. During its production run from 1883 through 1905, some 51,210 DA Frontier Models were produced by Colt. This was a far cry from nearly 358,000 Single Action Army revolvers produced during its original production life span from 1873 to 1940, but the Frontier paved the way for Colt to become the leading American manufacturer of double action revolvers from the late 19th through the mid-20th centuries.

Like most Colt revolvers of the time, the DA Frontier was available in a variety of finishes, barrel lengths and calibers. The standard finishes were blued or nickel-plated, with hard rubber grips. Engraving, special adornments and fancy grips were always available options. The barrel lengths were the same as the Single Action Army, with 4 “, 5 ““ and 7 ““ being standard, but longer and shorter barrels (often without ejector rods) being available as well. The standard Frontier was chamberings were Colt’s classic .45 Long Colt, and their less popular .41 Colt, as well the three popular Winchester Center Fire (WCF) calibers of the era; .32-20, .38-40 and .44-40. Special order calibers included .44 Russian, .44 German Government (11mm Reichsrevolver), 450, 455 and 476 Eley, .22 rimfire and .38 Colt. The revolver had a six shot, fluted cylinder, which was loaded and unloaded through a pivoting gate that was located on the right side of the frame. The cartridges were removed via a manual, spring-loaded ejector rod, mounted along the lower right side of the barrel, like that on the Single Action Army. An oval shaped, swiveling lanyard loop was mounted on the butt of the bird’s head grip of most of the Frontier revolvers. Although the Frontier never achieved the level of success of the Single Action Army, a variety of western notables, including Buffalo Bill Cody, Pawnee Bill Lilly and Rowdy Joe Lowe all owned and used Colt Double Action Frontier revolvers.

This Colt M-1878 Double Action Frontier Revolver is in about EXCELLENT condition and is accompanied by its period Mexican loop holster and cartridge belt, as well as a Colt Factory Letter. The revolver is serial number 9718 and was manufactured in 1883. It has a 7 ““ barrel, is chambered in .44WCF (.44-40), has a nickel-plated finish and hard rubber grips. All of these features are confirmed by the October 30, 2009 dated Colt archives letter. The revolver was shipped on March 15, 1883 to Hartley & Graham in New York. During the mid to late 19th century, Hartley & Graham (previously Schuyler, Hartley & Graham) was probably the single largest retailer of Colt firearms, and their custom shop also produced a dazzling array of engraved and embellished Colt arms, often with fancy and carved ivory grips. This revolver was part of a shipment of 50 identical guns sent to Hartley & Graham on that day. The revolver is 100% complete, correct and original. The gun retains about 93%+ of its Colt factory nickel-plated finish, with most of the finish loss the result of flaking within the cylinder flutes. There is also some flaking loss inside and around the triggerguard, and a few tiny specs of loss along the barrel. The areas where the nickel had flaked have developed a smooth brown patina. As is typical of 19th century nickel finishes, this one has dulled and frosted with age and has a slightly “milky” tone to the finish. The barrel of the revolver is clearly marked in a single line, left hand side: COLT FRONTIER SIX SHOOTER. This was Colt’s way of indicating the caliber of the gun was .44-40. The mark is applied with a roll die, and is not in an acid etched panel, as would be appropriate for the earlier production M-1878 revolvers. Colt started using the roll die mark instead of the acid etched mark during 1881. The top of the barrel is crisply marked in a single line as well and reads: COLT’s PT. F.A. MFG. Co. HARTFORD CT. U.S.A.. The bottom of the bird’s head grip is clearly marked with the serial number 9718, and the rear face of the cylinder is marked with the last three numbers, 718. The gun is mechanically excellent and functions exactly as it should. Both the double action and single action modes work crisply and the revolver times and indexes perfectly. The screws and small parts all retain an average of about 80%+ of their bright fire-blued finish, and the screw heads are mostly crisp with only the most minor slot wear noted. The loading gate operates as it should and the ejector rod functions smoothly and correctly. The original lanyard loop is present in the butt of the revolver and swivels and pivots appropriately. The bore of the revolver rates about excellent and is bright and shiny with very crisp rifling. Only some light scattered pinpricking and mild frosting in the grooves is noted. The two-piece, Rampant Colt hard rubber grips are in about fine condition overall. They are solid and free from any chips or breaks. They show the typical color fading that is expected from Colt hard rubber grips as they age, and now have a brownish color with a slightly green tinge, instead of their factory new black color. The Rampant Colt logos remain crisp and clear and the checkering shows only minor wear and light handling marks. The left grip panel has a minor stress crack at the top that is barely noticeable. It has been reinforced from the inside with epoxy to make it stable. This is a minor issue that can hardly be seen and does not affect the display of this wonderful condition revolver, but it is mentioned for exactness. The revolver is accompanied by a late 19th (or possibly very early 20th) century straight drop, Mexican Loop holster and cartridge belt, set up for right hand carry with the butt to the rear. The holster shows great age and has clearly been with this revolver for a very long time, as the fit is perfect. The oversized triggerguard of the M-1878 makes it difficult to fit in a holster for a Single Action Army, and this gun and holster fit so well that I have to believe the holster was made for this model of gun. The holster has impressed boarder tooling and a floral motif embossed near the mouth. The holster shows wear from use and carry, with some finish loss and flaking. However, the leather remains supple and all of the original stitching is in place and tight. The holster appears to be unmarked. The cartridge belt is unmarked as well, with the exception of the sizing mark 38 near the end of the billet. The overall length of the belt from the tip of the billet to the end of the buckle is 42”. The belt also shows real wear and use, similar to that of the holster. It has a nickel-plated buckle and the billet has 7 holes on 1” centers for adjustment. The belt has 37 cartridge loops sewn onto it, with about a half dozen of the loops broken and one missing completely. This appears to be from the wear caused by the holster riding over the loops. The loops are the appropriate size for .44/.45 caliber ammunition. This is a great old west workingman’s belt and holster rig, and not a latter day Hollywood piece. The rig is a wonderful addition to the display of this excellent Colt revolver.

Overall this is simply a fantastic condition example of Colt’s ground breaking, large frame double action “frontier” revolver. This is the gun that is father of all of Colt’s large frame double action revolvers, and is a great piece of old west history. The gun is in simply wonderful condition, and is accompanied by a wonderful western belt and holster rig and a Colt Factory Letter. The gun is 100% complete, correct and original, retains nearly all of its original finish and is mechanically perfect. This would be a great addition to any display of Colt revolvers or firearms of the American West, and is a gun you will be very proud to have in your collection.