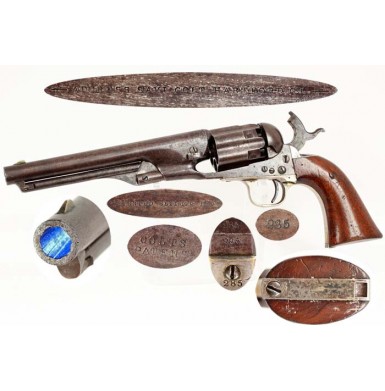 The “New Model” Army Revolver, as Colt referred to their new .44 percussion handgun introduced in 1860, was the result of experimentation to reduce the size and the weight of the current production .44 Dragoon revolvers. The Dragoon itself had undergone improvement and modification since its introduction in 1848, when it was designed as an improvement on the massive Walker Colt. From the very beginning of Colt’s manufacture of these .44 caliber handguns, their size and weight had in part been dictated by the metallurgy technology of the time. The relatively weak, high carbon steel of the period required large cylinders, frames and barrels to handle the pressure of discharge and to survive the rigors of the service. Even with the massive cylinders, catastrophic failures of Walker Colt cylinders were a significant problem, and even the Dragoon revolvers experienced some failures. The introduction of English low carbon steel during the 1850s allowed Colt and his team of designers to work on a slimmed down, lighter weight version of his Dragoon revolver. The massive Dragoon revolvers weighted in at slightly over 4 pounds, and made their use as “holster pistols’ in anything but a pommel holster somewhat inconvenient. By using what Colt referred to as “Silver Spring Steel”, the goal was to reduce the size and weight of the handguns. Initially Colt tried to simply scale down the Dragoon by shaving bulk and weight off the cylinder, frame and barrel. However, this was not particularly effective. The next step was to adapt the very successful Navy (M-1851) revolver frame and grip strap to a larger, .44-caliber cylinder and slightly bigger barrel. This was achieved by use of a rebated cylinder that was smaller in the rear, where it mated with the “Navy” sized grip frame, recoil shield and mechanism, and larger in the front where it accepted .44 balls and mated with the larger barrel. The new prototype pistols weighed in at around 2 pounds, 11 ounces, which was about a 25% savings in overall weight from the Dragoon revolvers. In 1860 Colt offered up his new design, the New Model Army Revolver. These revolvers had 7 ““ long, .44 caliber barrels, a “Navy” sized frame that used the same lock mechanism as the M-1851, and initially the same “Navy” sized grip frame and grips. The revolvers also had a more elegant solution to mating a larger caliber cylinder to the smaller frame. Colt introduced a fully fluted cylinder that was both aesthetically pleasing and helped to keep weight down. The revolvers also had round barrels, which were both lighter and easier to polish than the older octagon barrels, and a newly designed “creeping” loading lever that worked on a ratchet principle. This new lever was a significant improvement over the older hinged lever system. After about the first 100 of the New Model Army revolvers were produced, a new larger and longer grip frame and grip was adopted to increase control and handling of the pistol. While the initial grip strap and back strap material had been brass, iron was soon adopted for the backstrap to increase strength and durability. In May of 1860 Colt submitted a pair of his New Model Army to the US board of Ordnance for testing and evaluation. These guns weighed in at 2 pounds, 8 ounces (fully 1/3 lighter than the 4 pound, 2 ounce 3rd Model Dragoon) and had the original 7 ““ and a new 8” barrel lengths. The Ordnance Department was impressed with the revolver and showed a strong preference for the 8” version after completing their testing. From that point on, the demise of the 7 ““ barrel was only a matter of time, and after about 1,000 New Model Army revolvers were produced, the 8” barrel length became standard. However, the initial buyers of the New Model Army revolver were not the US Ordnance Department, but the various southern states that felt that the election of Abraham Lincoln was certain to lead to war. In the roughly 5 month period between Lincoln’s election and the firing on Fort Sumter on April 15, 1861, some 2,230 New Model Army revolvers were shipped to southern states or southern arms dealers. Some of the biggest orders were 1,100 to Kittredge & Folson of New Orleans, LA, 500 to Peter Williams & Company of Richmond, VA and 300 directly to the state of Georgia. Other southern gun dealers who purchased the New Model Army in smaller quantities William Sage (Charleston, SC), William T. Martin (Natchez, MS), H.D. Norton & Brothers (San Antonio, TX) and D.C. Hogkins & Sons (Macon, GA). It was H.D. Norton & Brothers that brought the fact that the new “fluted” cylinders of the New Model Army revolvers were bursting to the attention of Colt. The failures appeared to be due to the thinness of the metal between the chambers, and Colt tried to rectify the problem by drilling the chambers with a taper to the rear, instead of straight to the rear. This left more supporting material at the weakest part of the cylinder. This “work around” did not effectively resolve the problem, and by mid-1861 the fluted cylinders were effectively superseded by the original rebated round cylinder from the initial prototype design. While fluted cylinders appear in the #3 to #8000 range, it is generally believed that only about 4,000 of the New Model Army revolvers were produced with them, and many of those revolvers eventually ended up with replacement cylinders, either the taper bored, fluted pattern or the later rebated round variant. During the early production of the New Model Army, Colt also changed their barrel address from the “Hartford” address that had been adopted c1857 to the 2nd “New York” address that appeared sometime during 1861. This makes early production New Model Army revolvers with their original straight bored fluted cylinders and 7 ““ Hartford addressed barrels extremely scarce, even more so as so many of the early revolvers were sent to southern dealers, where they subsequently saw hard use during the American Civil War.

Offered here is a VERY GOOD+ to NEAR FINE condition example of a first year of production Colt New Model Army Revolver (aka M-1860 Army). The revolver is serial number 285, and is one of the earliest production guns. Only about 2,000 New Model Army revolvers were produced in 1860. This one has all of the scarce and desirable early production features. It has the correct 7 ““ barrel, the fully fluted cylinder without tapered chambers, and the Hartford barrel address. The gun also has the unique feature of a silvered iron backstrap. The earliest production Army revolvers had silver plated backstraps and gripstraps, as did the M-1851 Navy revolvers. Early in production, an iron backstrap was adopted for strength and durability. These backstraps were almost always blued, with only the brass gripstrap silver-plated. This pistol has both the brass gripstrap and the iron backstrap silver-plated. The revolver is in really remarkable original condition, considering its age, and the fact that most New Model Army revolvers ended up seeing Civil War service, mostly on the side of the Confederacy. The gun is entirely matching throughout, with the serial number 285 appearing on all the major components, including within one of the cylinder flutes and on the barrel wedge. The pistol remains crisply and clearly marked throughout as well. The lower left portion of the frame, near the barrel junction is marked COLTS / PATENT, and the top of the 7 ““ round barrel is marked: - ADDRESS SAML COLT HARTFORD CT - . The cylinder flute above the serial number is marked: PATENTED SEPT. 10th 1850. The pistol is uncleaned and untouched and has a lovely medium plum-brown patina over all of the iron components, mixed with flecked traces of original bright blue finish. The pistol may in fact have as much as 10% original finish present, scattered in tiny flecks over the entire gun. This is clearly one of those revolvers that suffered from finish flaking during its lifetime. The case hardened frame has a similar plum brown patina, with traces of the original mottled case coloring peeking though. Under the right light, the faded remnants of purples, blues and browns can be seen on the frame. The hammer and the loading lever retain similar traces of case colored mottling, mixed with the plum brown patina that covers the majority of the revolver. The brass gripstrap retains about 70%+ of its original silver plating, which is wearing and thinning at the points of most contact, as would be expected. The iron backstrap retains about 90% of its original silver plating, and has a dull, lightly tarnished tone to it. The pistol clearly saw use, and the chambers and cone recesses of the cylinders all show the accumulated gunk and filth from use over 150 years. While the metal of the pistol is predominately smooth, there are some small, scattered areas of very minor pitting (mostly around the cone recesses) and some small patchy areas of pinpricking and light surface oxidation. The bore of the revolver rates about VERY GOOD+ to NEAR FINE and retains crisp rifling for its entire length. The bore is mostly bright and shows lightly scattered pitting along its entire length, with a few more moderate patches present as well. The pistol is in EXCELLENT mechanical condition and the action remains extremely crisp. The revolver indexes, times and locks up perfectly and appears as tight as the day it left the factory. The loading lever functions smoothly and correctly, exactly as it should, and locks into place under the barrel securely. The original German silver front sight blade is in place on the barrel as well. The cylinder retains all of its original cones (nipples) and rear face of the cylinder retains at least a good portion of all 6 safety pins. A couple of battered and worn, all show use, but in general they are all in very nice condition. The one-piece walnut grips are in about FINE condition. They retain about 80% of their original varnish, with the most obvious wear being around the flared bottom edges and contact points. The grip is solid and shows no breaks, cracks or repairs. The letter S is carved into the upper portion of the left side of the grip, and the grips show a number of bumps, dings, handling marks and mars, as would be expected. The grips are not numbered, but the fit is perfect and the wear and patina match the balance of the pistol quite well.

Overall this is a very crisp and extremely attractive example of a scarce and desirable early production Colt New Model Army Revolver. The pistol is extremely well marked, has all matching numbers, and retains some traces of finish with a lovely patina. It has all of the desirable early features including a straight bored fluted cylinder, a 7 ““ barrel and a Hartford address. The gun probably one went to a southern retailer that was acquiring Army revolvers in late 1860 and early 1861. Unfortunately, most 2 and 3 digit New Model Army Colt revolvers cannot be researched with a factory letter, as the records were lost in the Colt factory fire in February of 1864. Even without a letter this is a wonderful example of a very early production “Fluted Army” in a very nice state of preservation, and is a gun that saw real use during its lifetime, rather than sitting unused in a wooden case. This will be a very nice addition to your Civil War revolver collection and is a pistol you will be very proud to own.