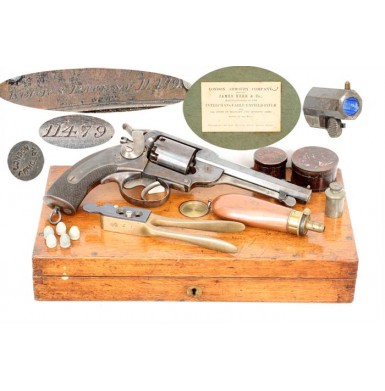 The Kerr’s Patent Revolver offered here is an extremely scarce, fully cased example in NEAR EXCELLENT condition. The gun was retailed by James Kerr after the dissolution of the London Armoury Company, but appears to have been assembled from parts manufactured prior to the London Armoury Company’s failure. The revolver retains a full complement of period and original accessories. The gun is serial numbered 11479 on the right side of the frame and on the cylinder. The lock plate of the pistol is clearly marked in a small, two-line, stamped, oval cartouche: LONDON / ARMORY. The lock marking is not the large, engraved London Armoury mark typical of pre-civil War and Civil War era Kerr revolvers, suggesting it was produced after the failure of the company, but that Kerr was still trying to trade on the company name as a sign of quality. The mark was made with the same stamp that was used to mark the left side of the frame of earlier production Kerr revolvers. The right side of the frame is marked: KERR’s PATENT 11479 and the matching serial number 11479 appears on the cylinder as well. Alternating (Crown) / V and (Crown) / GP marks are also found between the chambers of the cylinder. The left upper flat of the octagonal barrel is marked near the frame: L.A.C. along with the commercial London view and proof marks of a (Crown) / GP and (Crown) / V. The pistol is marked with the typical London Armoury Company assembly numbers. The number is present on the face of the cylinder, inside the trigger guard, on the trigger web and inside the bottom of the frame. The assembly number is 227 and matches in all of these locations. These assembly numbers are often illegible due to wear at the face of the cylinder and inside the frame, and only the number in the triggerguard typically survives clearly readable. The original cylinder pin retention spring is present and secure, and the action of the pistol works perfectly. The timing and lock up are very good as well. The original loading lever is present and functions smoothly also. The gun retains about 80%+ of its original blued finish overall. The barrel retains about 85% of its original bright, rust blue but shows some minor wear and finish loss, mostly along the sharp edges and points of contact, combined with some flaking around the muzzle. The frame retains about 70%+ of its original blued finish with most of the loss being due to flaking along the lower portion of the frame on both sides. The barrel web forward of the cylinder and the top strap both retain nearly all of their original bright blue. The areas of the frame where the finish has flaked have a nice, smooth, plum brown patina, with flecks of blue remaining. The cylinder retains about 85% of its original blue as well. The hammer also retains about 80%+ of its original case coloring, which has dulled and faded somewhat, and has a smoky gray undertone. There is some minor finish loss along the sharp edges and contact points of the hammer. There is also moderate loss of blue along the contact points of the backstrap, frontstrap and triggerguard. As with the lower frame, the areas where the blue has worn or flaked now have a smooth plum brown patina that blends well with the remaining finish. The lock plate retains about 80%+ of its original mottled case coloring, with the expected fading and dulling from age, making the colors somewhat less vivid than they were when new. The loading lever retains a similar amount of case coloring, and also shows some minor dulling and fading. The case hardened trigger retains about 65%+ case coloring, with the same muting, fading and dulling noted on the lock plate and loading lever. The fire blued spring cylinder arbor pin retaining clip and the loading lever locking clip both retain about 80%+ brilliant purplish-blue finish and are quite attractive. All of the edges and markings of the pistol remain extremely sharp and crisp. Like most Kerr revolvers, this one has a lanyard ring in the butt caps. The butt cap, retain about 40%+ of its original finish, which had blended with a smooth plum-brown patina. The original brass post sight is present on the end of the barrel near the muzzle and remains full height with the original crowning to its end. The bore of the pistol is in about EXCELLENT condition and remains quite bright and sharp. The bore retains very crisp rifling, and shows only the most minor traces of lightly scattered pinpricking in the grooves. The one-piece checkered walnut grip is in about EXCELLENT condition as well. It retains extremely sharp checkering over most of its surface, with only the most minor indication of handling and light use. The grip is free of breaks, cracks, chips or repairs, and have a rich chocolate brown color.

The pistol is contained within its original English casing and is complete with all a full complement of original and period accessories. The casing is typical varnished English oak design with brass hinges and a brass escutcheoned lock on the front. The case is in about VERY GOOD condition and shows moderate wear and finish loss, along with a couple of more recent dings and mars. The case shows some small chips and dings, and a couple of very minor surface grain cracks. The brass lock escutcheon is in place in the front of the case, but the key is missing. The interior compartments are lined with a faded green baize that shows good age and wear, and appears to be completely original to the casing. The case is in solid condition with no serious weakness to the structure itself or the interior compartment dividers. The brass hinges may be period replacements, or may simply be worn, as the “bible” hinges no longer hold the lid upright when open, allowing it to fold over completely to the rear. There is a wonderful original James Kerr retailer label inside the case lid. The label reads in eight lines:

The paper label remains in FINE condition with some age staining and light foxing present, mostly around the edges. The label seems to be straddling a fine line between trading upon the name of the defunct London Armoury Company, while still making it apparent that the retailer is actually James Kerr & Co, the struggling successor to L.A.C. Realistically, based upon the serial number of the gun and the label in the case the revolver was probably produced and retailed in late 1866 or early 1867, and is likely among the very last of the Kerr revolvers produced in England, prior to the sale of the remaining parts and machinery to produce the guns to Spain. The case is filled with the expected Kerr revolver accessories, all of which are contained in compartments. Included in the casing are the following original related Kerr accouterments:

1) 54-Bore Bullet Mould, in EXCELLENT condition. The mold is the typical 2-cavity brass mold found in many English casings, but casts two Kerr’s patent pointed-round nosed bullets with a single grease groove and shallow heel. The mold is marked 54 on the side, indicating 54-Bore. The mold is also marked with a Robert Adams patent mark, suggesting the mold may have been obtained from the former London Armoury employee who was running his own business at the time. Adams marked molds are typically encountered in late production cased Kerr revolver sets, suggesting that Kerr was obtaining his molds from Adams rather than making them himself. The mold cavities are distinctly Kerr in style and not the half-circle round-nose shape of Adams patent bullets. The brass body has a rich ocher patina that is untouched and uncleaned, and the mold cavities remain bright and clean with excellent edges. The blued sprue cutter is in wonderful condition, functions smoothly and retains about 70% of its original bright fire blue, which is fading and starting to turn a plum-brown color.
2) Powder Flask in about FINE overall condition. The small bag shaped flask is of copper with an adjustable brass spout and top. The body of the flask retains much of its original protective varnish and shows only a few small bumps and dings. The polished brass top is clearly marked in three lines JAMES . DIXON / & SONS / SHEFFIELD. The original fire blued closure spring is in place on the top of the flask and the flask functions correctly. The adjustable spout allows the flask to throw charges of 3/8, 1/2 or 5/8 Drams of powder.
3) Cap Tin in FINE condition. This original jappaned tin is empty, but retains much of its original finish. The lid is clearly embossed with ELEY BROs in an arc over LONDON.
4) Pewter Oiler in EXCELLENT condition. The oiler is complete with the detail oiler attached to the inside of the lid. The bottom of the oiler is clearly marked: JAMES DIXON / & SONS / SHEFFIELD.
5) Jappaned Tin for Bullets in FINE condition. The jappaned tin shows bumps, dings and dents from handling and use and from holding the lead bullets. It retains most of its original paper lining. It is unmarked and empty.
6) 5 Lead Bullets in VERY GOOD condition. The bullets have a thick white age patina. The bullets have a more rounded ogive than the mold cavities and appear to be more typical of Adams bullets than Kerr bullets. They do, however, add nicely to the display of the set.

Overall this is a really wonderful example of a very late production Kerr’s Patent Revolver complete with original casing and accessories. The pistol is about EXCELLENT condition and is surely an investment-grade example that would be rather difficult to upgrade from. The gun is absolutely 100% complete and correct in every way and is in perfect mechanical condition. This will be a wonderful addition to your collection of English percussion revolvers and is a perfect bookend to show the last of the English made percussion Kerr revolvers, which were soon supplanted Spanish made percussion and later cartridge Kerrs.