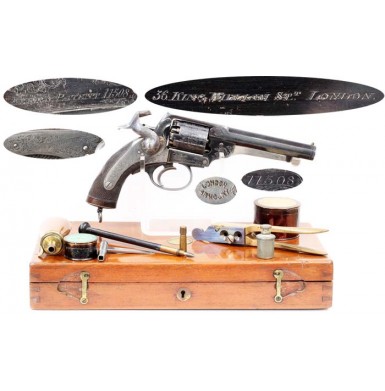 The pistol is contained within its original English casing and is complete with all a full complement of original and period accessories, including the extremely rare Kerr revolver combination tool. The casing is typical varnished English design that appears to be of mahogany (or at least veneered with mahogany) rather than the more commonly encountered oak. The case is trimmed with brass hinges and a brass escutcheoned lock on the front, and has a pair of closing clasps more often associated with Tranter style casings than Adams style casings. The case is in about FINE condition and shows some light moderate wear and finish loss, along with a couple of more recent dings and mars. The case shows some small chips and dings, and a couple of very minor surface grain cracks. The brass lock escutcheon is in place in the front of the case, but the key is missing. The interior compartments are lined with a faded green baize that shows good age and wear, and although its wear makes it appear as if it is original to the casing, the less than expert application of the lining suggests that it is in fact a very old (and possibly period of use) replacement lining. It could well be original to the case, but the quality of the installation is just not what is typically encountered on mid-19th century British firearm casing. The case is in solid condition with no serious weakness to the structure itself or the interior compartment dividers. The soft wood bottom of the casing does show some minor grain cracking and wear, which is typical. The brass hinges appear to be original to the casing. There is a wonderful original James Kerr retailer label inside the case lid. The label reads in nine lines:

The paper label remains in FINE condition with some age staining and light foxing present, mostly around the edges and one obvious tear in the lower left portion of the label, below most writing and not obscuring any of the graphics. Realistically, based upon the serial number of the gun the, revolver was probably produced and retailed in late 1866 or early 1867, and is likely among the very last of the Kerr revolvers produced in England (if not the actual last one), prior to the sale of the remaining parts and machinery to produce the guns to Spain. However, the label in the case appears to be from the earlier London Armoury era (probably from the late 1850s), as the two-line notice: SOLE MANUFACTURERS OF / ADAMS’ & KERRS REVOLVERS is present under the English Royal Coat of Arms. This suggests that as the company was winding down, an older label was employed in the casing. The case is filled with the expected Kerr revolver accessories, all of which are contained in compartments. Included in the casing are the following original related Kerr accouterments:

1) 54-Bore Bullet Mould, in EXCELLENT condition. The mold is the typical 2-cavity brass mold found in many English casings, but casts two Kerr’s patent pointed-round nosed bullets with a pair of narrow grease grooves and shallow heel. The mold is marked 54 on the side, indicating 54-Bore. The mold is also marked with a Robert Adams patent mark, suggesting the mold may have been obtained from the former London Armoury employee who was running his own business at the time. Adams marked molds are typically encountered in late production cased Kerr revolver sets, suggesting that Kerr was obtaining his molds from Adams rather than making them himself. The mold cavities are distinctly Kerr in style and not the half-circle round-nose shape of Adams patent bullets. The brass body has a rich ocher patina that is untouched and uncleaned, and the mold cavities remain bright and clean with excellent edges. The blued sprue cutter is in wonderful condition, functions smoothly and retains about 85%+ of its original vibrant fire blue, which is fading and starting to turn a plum-brown color.
2) Powder Flask in about FINE overall condition. The small bag shaped flask is of copper with an adjustable brass spout and top. The body of the flask retains much of its original protective varnish and shows only a few small bumps and dings. The polished brass top is clearly marked in three lines JAMES - DIXON / & SONS / SHEFFIELD. The original fire blued closure spring is in place on the top of the flask and the flask functions correctly. The adjustable spout allows the flask to throw charges of 5/8, 4/8 or 3/8 Drams of powder.
3) Cap Tin in FINE condition. This original jappaned tin is empty, but retains much of its original finish. The lid is clearly embossed with ELEY BROs in an arc over LONDON.
4) Pewter Oiler in EXCELLENT condition. The oiler is complete with the detail oiler attached to the inside of the lid. The oiler is unmarked.
5) Jappaned Tin for Bullets in FINE condition. The jappaned tin shows bumps, dings and dents from handling and use and from holding the lead bullets. It retains most of its original paper lining. It has a lovely ELEY BROs label and contains 9 lead bullets that conform to the dimensions and pattern of the mold cavities. The bullets have a moderate amount of white oxidized patina, but are of indeterminate age.
6) An ebony cleaning rod with a removable brass jag that reveals a ball screw to pull loaded charges from the cylinder. The rod is in FINE and complete condition.
7) An original Kerr’s Patent Revolver combination gun tool in FINE condition. There are two known styles of these tools and since the other style is encountered in cased sets with lower serial numbers, I have arbitrarily assigned this tool the designation of “Type II”. The tool is extremely rare, and in fact this exact tool is pictured on page 234 of The English Connection by Russ Pritchard Jr., C.A. Huey, et. al. No other example of this pattern of tool was available to be photographed for the book. Pictured on the same page are an identical pattern powder flask and cleaning rod from another cased Kerr revolver, which match these accessories perfectly. Like most English combination tools, this one combines a cone (nipple) wrench, a screwdriver and a small oil container with a detail oiler as part of the oil compartment cap. The tool is bright metal and appears to have been finished in the white. In more than two decades this is the only example of this pattern of tool that I have ever seen, and as an extremely rare Kerr accessory I feel the tool itself is worth approximately $1,000. There is no doubt that the tool is original to the casing as the compartments are specially cut to accommodate the tool, supported above the spout of the powder flask.

Overall this is a really an outstanding example of a very late production Factory Engraved Kerr’s Patent Revolver complete with original casing and accessories. The pistol is truly in EXCELLENT condition and is absolutely stunning in person. Cased Kerr revolvers are extremely rare and factory engraved Kerrs are confined to a handful of extant examples that practically never appear on the market for sale. This is surely an investment-grade example that would be almost impossible to upgrade from. The gun is absolutely 100% complete and correct in every way and is in perfect mechanical condition. This will be a stunning addition to your collection of English percussion revolvers and is a perfect bookend to show the very last (if not the last) of the English made percussion Kerr revolvers, which were soon supplanted Spanish made percussion and later Spanish cartridge Kerrs. To put this wonderful set in perspective, if this was a cased & factory engraved Colt Army or Navy in the same condition the price would likely be in the mid-$30,000 to as high as the $50,000 range. As such, this equally historic and wonderful gun is a real bargain for the discerning collector!