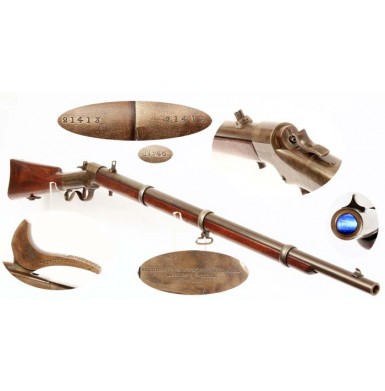 The Ballard Military Rifle was one of the best single shot, self-contained cartridge rifles to see use during the course of the American Civil War. In fact, arms historian and author John McAulay, in his book Rifles of the US Army 1861-1906, referred to Ballard military rifles as “the most advanced single shot rifles to see service in the Civil War.” Charles H. Ballard of Worchester, MA invented the Ballard rifle, and was granted patent number 33631 in November of 1861. The single-shot rifles utilized a dropping block action, actuated by an under-lever that doubled as a triggerguard and pistol grip. The action dropped and tilted out of the way to allow the loading and unloading of the chamber. All of the rifles were produced to use self-contained metallic rimfire cartridges. The fired cartridges were ejected with a manually operated extractor. A short lever, under the forend was drawn backwards when the action was open, extracting the cartridge. The extractor was tensioned by a coil spring, which returned the extractor to its resting position when the lever was released. During the first few years of production, five different companies produced the Ballard rifle, with Merwin & Bray of New York handling the distribution and sales of the rifles (at least on some level) for all five companies. Ball & Williams of Worcester, MA, initially produced the rifles, with production running from 1862 to 1865. In 1863, due to the inability of Ball & Williams to produce enough guns to fill contract orders, Dwight, Chapman & Company of Bridgeport, CT began producing the rifles as well, and did so into 1864. Post Civil War production of the rifles was handled by Ball & Company (the re-named Ball & Williams Company) from 1865-1866, by Merrimack Arms Company of Newburyport, MA from 1867-1869 and by Brown Manufacturing Company of Newburyport, MA from 1869 to 1873. When Brown went out of business in 1873, their assets were sold at auction and the buyers arranged to have the John Marlin produce Ballard patent arms. In 1881 Marlin incorporated as the Marlin Firearms Company and Marlin continued the production of “Marlin-Ballard” rifles until 1891. During that decade, the Marlin-Ballard developed a reputation for being one of the finest single-shot rifles on the market. Brown Manufacturing only produced about 1,700 Ballard rifles of all types during the 4 years that they manufactured the rifles. Of those about 700 were sporting arms, and it is estimated that about 1,000 were military rifles. The military rifles were all chambered for .46 Rim Fire, and handful of them were manufactured with a dual ignition system that allowed the guns to fire both rimfire ammunition and allowing the arms to be ignited with percussion caps as well. The theory was that the spent rimfire cartridges, which were not reloadable, could be loaded manually with powder and a bullet, and then have a small hole drilled in the bottom of the casing, allowing ignition with the percussion cap; similar to the cartridges used by 1st and 2nd model Maynard carbines. Brown apparently hoped to acquire foreign military contracts for their Ballard military rifles, but none were forthcoming, contributing to the financial failure of the firm.

This is a VERY FINE+ condition Ballard Military Rifle produced by the Brown Manufacturing Company. The gun also utilizes the rarely encountered dual ignition, rimfire & percussion ignition system, which was very rarely offered on the military rifles and was primarily found on sporting rifles. The rifle is a later production Brown Manufacturing gun, with the serial number 21413 found on the top of the barrel and the top of the receiver. Brown production is believed to have run concurrently from the earlier Merrimack Arms serial numbers, with production being in the 20,300 to 22,000 range. The top of the barrel is also marked clearly No46, indicating .46 caliber. The left side of the receiver is clearly and crisply marked in three horizontal lines: BROWN MFG Co NEWBURYPORT, MASS. / BALLARD’s PATENT / NOV 5, 1861. The left side of the hammer spur is clearly marked: PATENTED JAN 5, 1864. The Brown dual ignition system was somewhat simpler than the original Ballard dual ignition system. The original system required the user to swivel the hammer striker for either rimfire or percussion use. The Brown system used a floating firing pin in the breechblock and recessed hammer nose that allowed the same hammer to fire both systems simultaneously without adjusting the hammer. The downside to this was that the percussion cone was set below the center of the cartridge base, requiring the ignition hole in the base of the cartridge to be large enough to insure the flame from the offset cap flash ignited it. As noted earlier, the gun is in VERY FINE+ condition. The rounded frame and receiver of the rifle retain about 70% vivid case coloring, with some fading towards a tobacco brown patina. The breechblock retains about 90% vivid case colors. The operating lever retains about 70% of its original case coloring as well, with the balance having faded to the same tobacco patina. The hammer retains slightly more vivid coloring, around 80%. The case hardened barrel bands have faded to a tobacco brown color with strong traces of original case coloring. The 30” round barrel retains about 30% original blue on the exposed surfaces, which have also faded to a smooth, smoky grayish-brown patina. The bottom of the barrel (protected by the forend) and the barrel under the bands, retain about 70%+ of the original blued finish. The action of the rifle functions perfectly, with the breechblock tilting smoothly and locking tightly into position. The hammer functions correctly, and engages at both “ cock and full cock perfectly. The bore of the rifle is in about FINE condition. The bore is mostly bright with crisp rifling. The bore shows only some lightly scattered pitting along its length, most of which is confined to the grooves. The rifle retains its original L-shaped, long-range aperture rear sight and the original front sight. The rifle also retains both original sling swivels. The wood of the rifle rates about FINE as well. The forend is full length and is free of any breaks, cracks or repairs. The forend shows a few minor bumps and dings from use, and some light surface scrapes from the removal of the barrel bands for cleaning and maintenance. The buttstock is in similarly FINE condition, and is also free of any breaks or repairs. The buttstock also shows a number of minor bumps and dings from handling and use, along with some minor surface scuffing.

Overall this is a really wonderful condition example of a scarce Brown Manufacturing Company Ballard Military Rifle with the very rare dual ignition system. The rifle is 100% complete, correct and original and is simply gorgeous. This would be a great addition to any collection of post-Civil War, secondary military rifles and would be a very difficult example to upgrade from.