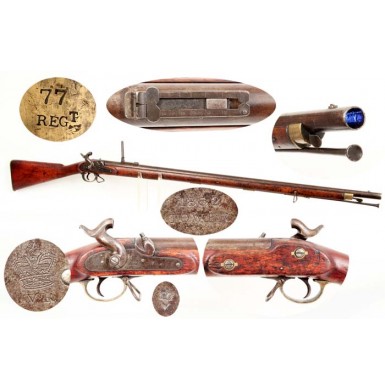 The P-1851 Mini” Rifle offered here is in about VERY GOOD+ to NEAR FINE condition. The gun is a pure British military example and shows no indication of having been refurbished and sold to the Confederacy. The stock shows indications of heavy use, with numerous bumps and dings from service, but the gun remains in crisp condition with no abuse noted. The musket is 100% complete and correct, which is certainly uncommon for a P-1851 and all of the usual parts that are typically missing (rear sight, ramrod, Lovell’s catch) are present. The gun is clearly and well marked throughout, with all marks in the metal remaining very legible. The most interesting mark is on the bottom of the butt plate, which is stamped, upside down, 77REGT. As noted above, the 77th was one of the first 10 regiments to receive the P-1851 for trial purposes. The marking on the butt certainly does not follow standard British military marking protocol, but may have been applied to the early production trials guns from the initial issue or may have been applied in the field in the Crimea. The 77th carried P-1851s in the Crimea, and used them at all the major battles they were engaged in, including Inkerman. A couple of Fenton images (the “Brady” of the Crimean War) are included below with the pictures of the musket, showing the 77th in the field in the Crimea carrying P-1851 Mini” Rifles in winter dress. These images are from the on line catalog of items in the National Army Museum (England).

The lock of the rifle musket is engraved in the typical manner for the P-1851 and has the usual (CROWN) / VR at the tail of the lock and the date 1852 / TOWER forward of the hammer. The usual British military (CROWN) / (BROAD ARROW) acceptance mark is present on the lock as well. The original British military proof marks are crisp and visible at the left breech of the musket. These include a (CROWN) / (BROAD ARROW) followed by a (CROWN) / B / 9 and a (CROWN) / TT / (BROAD ARROW). The top of the breech is also struck with a (CROWN) / (BROAD ARROW) acceptance mark. The bottom of the barrel is marked with the usual British military proof and inspection marks, including a (CROWN) / B / 7 and a (CROWN) / B / 3. The barrel is additionally marked H&S / Y for Hollis & Sheath, and with the initials R.W and J.M. Hollis & Sheath were among the four “old contractors’ who delivered the entire initial order of P-1851 Mini” Rifles. The other three contractors included Thomas Turner, Swinburn & Son and Tipping & Lawden. The bottom of the barrel also has two sets of assembly mating marks X \ / | | | and \ / | |. Both of those assembly marks are found on the lower edge of the lock as well. The interior of the lock is marked J.M over the mainspring, and G&F near the bridle. The interior is stamped with a (CROWN) / B / 6 inspection mark, and the inside of the hammer neck is stamped with a (CROWN) / B / 12 mark. Both of the lock mounting screws bear the mating mark X \ / | | |, as does the barrel tang screw. The marks are also found on the edges of the three barrel wedges. The same mating mark is found in the ramrod channel, along with some blurred Crown/B/# inspection marks and an illegible stock maker’s name. The metal of the gun is mostly smooth, with some lightly scattered pinpricking present as well as some small patches of minor surface oxidation. The barrel has a lovely, smooth plum brown patina over most of its exposed surfaces, with only some light pitting around the breech and bolster area and the muzzle. There may be some traces and fleck of the original barrel browning mixed with the attractive patina. The lock has a mottled gray appearance, with a smooth pewter base color and darker gray mottling and some lightly oxidized surface staining. Some minor traces of the original case hardened coloring of the lock may actually be present within the mottled patina. The bore of the gun is in about GOOD+ to VERY GOOD condition. The bore retains well-defined 4-groove rifling, and is lightly to moderately pitted along its entire length. A good scrubbing could well improve the overall condition of the bore. Unlike most Pattern 1851 Mini” Rifles, this gun is 100% complete, correct and original. It retains both of the original sling swivels, as well as the complete long-range rear sight (including the delicate ladder and adjustable slide). The gun also retains its original and correct ramrod, which retains barely visible 1 mark near the concave button head. The rod is full-length and retains good threads on the opposite end. The original Lovell’s Pattern bayonet catch is in place under the barrel. This is another delicate piece that is usually missing when a P-1851 is found available for sale. The lock of the gun is mechanically excellent and functions perfectly on all positions. The brass furniture has a lovely, dark and untouched ochre patina that is very attractive. The stock of the musket is in about VERY GOOD overall condition. The stock is solid and sound, with no breaks, cracks or repairs. The stock does show a significant number of bumps, dings and mars from carry and use during its military service life. The musket clearly saw use, but was never really abused. There is a small sliver of wood missing along the upper edge of the stock line, on the right side, just forward of the middle pipe. This area is worn smooth with age and the sliver was almost certainly lost during the period of use. The stock bears an interesting brand on its obverse that I have not identified. It is a large circle with the center divided into quarters, with the mark W T B & S Co. It is not clear who the “WTB & C Company” is, or why they branded the gun. I would have to assume that this mark was applied after the musket had completed its British military service life, and was applied by a surplus dealer or the company that purchased the gun for use. Any further information would be appreciated.

Overall this is a really wonderful, completely correct and original example of a British military Pattern 1851 Mini” Rifle. Considering the hard life that the gun likely experienced during the Crimean War, in post-war storage and in some form of post-British military service life, the gun is really in remarkably good condition. The 77th Regiment of Foot marking on the buttplate certainly implies that the musket was present at Inkerman, the Siege of Sevastopol and Alma, where it no doubt saw hard service. The scarcity of any type of P-1851 on the collector market cannot be understated, and many collectors have searched for one of these muskets for more than a decade and been unable to find one. Some have searched even longer, hoping to find a 100% complete example that remains in reasonably crisp condition. This is just such a gun, a truly rare British military musket that is an essential part of any serious mid-19th century British military collection and a gun that would be a fantastic addition to any advanced Crimean War collection.