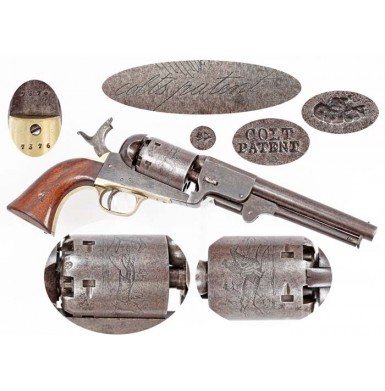 This is a very crisp and NEAR FINE condition example of a Colt “Brevete” 3rd Model Dragoon Revolver, manufactured under license in Li’ge, Belgium. Brevete is the French word for “patented”, and as the word often appears on foreign made Colt revolvers, collectors have applied the term “brevete” to all foreign made revolvers that are similar to, or direct copies of, Colts. For many years, collectors felt that all of these foreign-made “copies’ of Colt Patent Firearms handguns were illegally manufactured, patent infringement guns. While some of the guns certainly fall into that category, the reality is that many were manufactured legally, under an agreement with Colt. The plan was the brainchild of Colonel Colt himself. Samuel Colt realized that his designs and patents would be very popular and would tempt the gun makers in Li’ge, as well as all across Europe, to manufacture guns that violated his patents, and might even be outright counterfeit arms. To forestall these events, and to make sure that his company would profit from any arms manufactured under his patents, Colt’s patent agent William E Newton negotiated a royalty fee of 10 francs per copy with many of the major gun makers in Li’ge, Belgium and across the continent. Via Newton’s negotiations, the Colt Patent Firearms Company entered into licensing agreements with numerous arms manufacturers to produce revolving arms under Colt’s patents, and to pay licensing fees and royalties to the Colt’s Patent Firearms Company. This was a brilliant business strategy, as it essentially undermined the potential faking of Colt revolvers, and also insured a revenue stream for the company. Under the agreement, the foreign-made guns were to be sold in Europe only, and were not intended to be arms that would directly compete with Colt’s products in the United States. This did not work out exactly as planned, and by 1853, Colt was pursing legal action against several continental gunmakers who were offering copies of his guns for sale to American retailers. Colt also warned American retailers that foreign made copies of Colt revolvers were not intended for sale in the United States. Many arms historians and authors believe that Colt also used the foreign manufactures as a dumping ground for pistol parts. The “brevet” revolvers that are nearly identical copies of Colt products are believed to include at least some Colt manufactured parts, likely over-runs and factory second frames, barrels, cylinders, etc. These were then combined with locally manufactured parts to complete the revolvers. By the late 1850s, the licensing agreements with many of the foreign manufacturers were beginning to break down (or expire) and Colt found himself combatting a large number of “counterfeit” continental arms that were being offered for sale in America. In 1859 Colt sent an “advisory notice” to many American retailers. This November 24, 1859 missive is officially filed in the Colt archives at the Connecticut State Library under the document name: “Caution to Manufacturers, Merchants and Purchasers of Rotating Breech Chambered Fire Arms”. Clearly, from the title of the notice, Colt was trying to undermine the “brevete” market in America by dissuading both retailers and retail customers from buying the pistols. Colt likely made the “caution” public by releasing it to the press as well, for publication in US newspapers. This clearly proves that while the foreign-made “Colts’ were never intended for American sale, they became a significant enough problem that Colt had to try to intervene and stem the flow of brevete arms to America.

This Colt “Brevete” 3rd Model Dragoon Revolver was manufactured by Nicholas Gilon of Li’ge, Belgium, likely in the late 1850s. Gilon was one of the first Belgian manufacturers to enter into a licensing agreement with Colt, but by the late 1850s Gilon was manufacturing what Colt himself termed “counterfeit” revolvers. This was because the licensing agreement between Colt and Gilon had expired, but Gilon continued to manufacture Colt patent arms, without paying the 10-franc per gun royalty. At least one Gilon produced Colt M-1851 Navy is in the Museum of Connecticut History that was included in an 1861 inventory of Colonel Colt’s “Large Office”, and was listed in that 1861 inventory as “Counterfeit (French) Navy pistol No 5014”. This gun is likely one of Gilon’s “counterfeit” 3rd Model Dragoon revolvers. Colt did not introduce the 3rd Model Dragoon until 1851 and it typically took a year or two for the continental makers to update designs and models. As such, Gilon probably did not start making 3rd Model Dragoons until 1852 or 1853, and his licensing agreement with Colt appears to have expired circa 1854-55. The revolver is in NEAR FINE condition, and is extremely crisp throughout. The gun has a 7 7/8” octagon to round barrel, a 2 3/16” long cylinder, and is about 14 ““ in overall length. The massive revolver weighs in at a hefty 4 pounds, 3 ounces! The gun is clearly marked in two lines on the top barrel flat: COLT / PATENT, and is engraved in script on the cylinder: colt’s patent. The cylinder is marked with the Belgian proof of an E / LG / * within an oval. This proof mark was in use on Belgian arms from 1846-1893. The gun is serial numbered 7376, and the serial number appears on the bottom of the barrel web, the bottom of the frame and on the forward portion of the brass triggerguard. Unlike Colt made revolvers, the cylinder, arbor, butt, loading lever and wedge are all un-numbered. The face of the cylinder is marked N / GILON, with the name “Gilon” in an upward arcing curve. The loading lever is also marked NG on its bottom, just forward of the plunger hinge. The cylinder is deeply roll engraved with a wonderfully clear scene of mounted US Dragoons chasing a mounted Indians. The cylinder retains about 90%+ of this original scene and is really striking and attractive The frame and the barrel of the gun retain some traces of their original finish, which has faded and blended with a smoky, blue-gray patina, with hints of brown. The same patina appears on the loading lever and cylinder as well. The metal of the gun is nearly entirely smooth, with only some scattered areas of light to moderate pinpricking and some minor surface oxidation. There is some light pitting present on the face of the cylinder, as well as a thumb print size area on the left side of the barrel and loading lever, about halfway between the octagon section and the muzzle. The gun is mechanically fine and functions exactly as it should. The pistol times, indexes and locks up exactly as it should. The loading lever operates smoothly, and locks into place under the barrel, as it should. The cylinder retains four of tis original cones (nipples), and has two that appear to be period of use replacements. All six cones show the same amount of wear and use and all are in very good and useable condition. The only difference between the two replacement cones and the factory ones is the size of the vent hole, and this is only visible when the cylinder is removed from the gun and viewed from the rear. The bore of the revolver measures .429”, which is correct for a 19th century .44 caliber pistol. The bore is absolutely smooth, and does not appear to have ever been rifled. If Gilon was producing smooth bore revolvers, it is no wonder that Colt was adamant about the guns not being sold in America! The bore is somewhat dirty and may improve with some scrubbing. It shows light to moderate pitting scattered along its entire length. All of the screws appear to be original and they remain in relative crisp condition with minimal slot wear. The one-piece walnut grip is in NEAR FINE condition as well. The grip is solid and free of any breaks or repairs. The grip retains about 75%+ of its original varnish. As would be expected, the gun grip shows scattered bumps, dings, dents and mars from handling, carry and use. The leading edge of the bottom of the left side of the grip shows an old, tiny chip, that has worn smooth. The grips also show a couple of deeper ding and bruises that should be clearly visible in the photos below. The right side of the grip shows a tiny, ““ long grain crack, located at the top, just below the frame mounting screw. This is minor, stable and barely visible, but is mentioned for exactness.

Overall this is a really attractive example of a Belgian “Brevete” Colt Dragoon Revolver by a famous Li’ge gunmaker. Gilon produced Colt revolvers appear in major museum collections and are an important part of history of the Colt firearms company. Rarely do Belgian made Dragoons appear on the market in such crisp condition, with such wonderful markings and such vivid cylinder scene. This would be a great addition to any collection of Civil War era percussion revolvers, especially one that focuses on European made import arms. The impressive cylinder scene on this revolver is reason enough to add it to your collection.